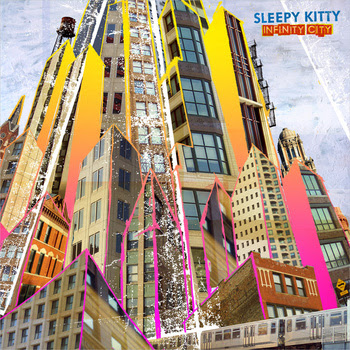 "Sleepy Kitty began as an experimental sound project for a class when frontwoman Paige Brubeck was enrolled as an undergraduate at School of The Art Institute Chicago in 2007. Brubeck and Evan Sult (ex-Harvey Danger) began layering field recordings of the “L” and Wicker Park street poets with ’60s style harmonies and crashing drums. Sult was playing drums in the math-rock indie-pop band Bound Stems at the time, and Brubeck was playing guitar in the girl group trio Stiletto Attack, but as the two bonded over Pavement and The Fall, they began writing their own post-punk, show-tune inflected songs and Sleepy Kitty went from side project to full on band."

Check the band out at their official Website, Facebook, Twitter, BandCamp, Instagram. and Sleepy Kitty Arts. Their latest album, "Infinite City" is out on Euclid Records and I have been cranking the hell out of it. I am gleefully continuing my coverage of the Paste 50 States Project again this week and bring you today the fantastic Sleepy Kitty from Missouri. Huge thanks to Paige Brubeck (Guitar/Keys/Vocals) and Evan Sult (Drums/Tapes/Vocals) for taking the time to participate in this edition of First/Last.

The first album you ever bought?
Paige: I think either TLC “Crazy Sexy Cool” or Alanis Morrisette “Jagged Little Pill”. “Jagged Little Pill” turned out to be a really big deal to me, because singing along to that album is when I first started really singing harmonies.
Evan: Cassette was the ‘Ghostbusters’ soundtrack. Vinyl was Def Leppard's “Pyromania”.


Your last album bought?
Paige: I got vinyl of Jacques Guetary, Les Paul and Mary Ford, Fred Astaire all on the same day.
Evan: Speedy Ortiz, “Major Arcana”. If you haven't heard them yet, definitely check them out.


Favorite album of all time?
Paige: This is a tough one. The Velvet Underground's self-titled album always comes to mind first. They're my all-time favorite, and that album seems to cover all of their different facets.
Evan: Geez! Paul Simon's “Graceland” is my mother's milk, but Pavement's “Crooked Rain, Crooked Rain” made music apply to me personally. It just opened my mind up wide.


Least favorite/most disappointing album?
Paige: Interesting question. For me least favorite and most disappointing are slightly different. Least favorite would be something I avoid. Most disappointing is the ‘Smash’ Soundtrack. (Yes, I watched ‘Smash’. Both glorious seasons.) It didn't have enough of the Megan Hilty songs!
Evan: After my freshman year of college I spent a summer working the graveyard shift at a gas station. There were two CDs in that tiny little shack, one by Testament and one by Red Hot Chili Peppers. I never need to hear “Blood Sugar Sex Magik” again.


First concert attended?
Paige: First concert I attended would have been ‘Warped Tour’ '98. I had just started playing bass and I was playing trombone and I LOVED ska.
Evan: Sophomore year, my parents drove me across the Canadian border to stay overnight in a plaza for tickets to the Rolling Stone's ‘Steel Wheels’ tour. The gates were already closed, with my friends on the other side. Hundreds and hundreds of hippies were trying to wheedle their way in, hop the fence, bribe the guards, anything. My mom said, "Can he just pop in to tell his friends what happened?" The guard assented and helped me across the fence. As soon as I was in I knew I wasn't going back; I turned around to signal my parents and they were already getting the hell out of there. Bless their souls!
That night in the plaza was way more crazy, true rock 'n' roll than the concert itself, I must say.


Last concert?
Paige: Last big concerty concert I went to was Bob Dylan, but we go to a ton of local and independent touring bands' shows on a regular basis. We just saw The Lonelyhearts, Boreal Hills, and Bo & The Locomotive at Blank Space in St. Louis, and shortly before that The Big Muddy Records showcase/fish fry/party comes to mind at Off Broadway.
Evan: That sounds about right. We saw Bob Reuter's Alley Ghost at the Big Muddy show, which I'll be forever grateful for. He was one of St. Louis' finest, and he just left us.


Favorite concert ever?
Paige: This is a hard one. I used to have specific answers, but the more shows I see the harder it gets which must mean I'm seeing a lot of good shows. One of the most amazing and fun shows I've ever seen was Fischerspooner at the Metro in Chicago. That was awesome. Also, Stephen Malkmus acoustic at Pitchfork when he surprised us all with a bunch of Pavement songs! That was before Pavement did their reunion tour, so that was really special to me. Giant Sand at The Double Door in Chicago was pretty unforgettable too. There are also a bunch of local concerts that will always be close to my heart – first time I saw Bug Chaser at El Leñador in St. Louis, and first time I saw Bob Reuter's Alley Ghost, also at El Leñador, are a couple that immediately come to mind.
Evan: I don't mean to pull a trump card here, but it's impossible not to. When I lived in Seattle some friends and I drove up to Bellingham, WA to see Mudhoney play a small college gymnasium. I was in the pit, all ready to get sweaty, and Nirvana runs out onto the stage. They played mostly songs from Bleach and B-sides, pretty much all of which I knew by heart. Everyone surged and crashed and hollered and suddenly someone grabbed me and threw me on top of the crowd. It was the only time I ever crowd surfed, and I have to say I was in total heaven. The band was having a great time, everyone on the floor was having a great time, and it was clear to all of us that this was a one-time-only situation. Oh, and Mudhoney rocked every bit as hard as Nirvana. Glory days, no doubt.


Least favorite concert?
Paige: This could also be called "most disappointing concert." I don't want to name names, but there was a particularly grumpy performer at Pitchfork once that I was really excited about seeing for the first time, until she scowled her way through the performance and kept yelling at the sound guy.
Evan: I absolutely loved, loved, loved the first two PJ Harvey albums: “Dry” and “Rid of Me”. I just loved her bassist, her drummer, and her amazing guitar playing. She seemed so uniquely brazen and cool. Tiny but tough, with a giant hollow-body guitar. By the time I was able to see her live, I showed up ready to rock, and she was supporting “To Bring You My Love…” with a new band. She was wearing a slip and had mascara running down her face and she didn't even pick up a guitar, just occasionally bounced a tambourine off her hip. When they played the older songs, the band clearly could not keep up with the originals. I was crushed.
Now that I have more experience making albums, I have to respect an artist's decision to evolve; at the same time, I still think those first two albums were performed by one of the best bands ever.


Any thoughts, experiences about Pittsburgh?
Paige: Pittsburgh is a beautiful city. I love how the river is such a part of the city. Plus, we're screenprinters and Andy Warhol is one of my all-time favorite entities. Last summer we had a great time at the Warhol museum. Also, your baseball team is tough.
Evan: I think Pittsburgh and St. Louis have a lot in common—they're both river cities with industrial pasts, that are now being reconfigured to meet the needs of artists and other livers of unconventional lives. And I think that's great. Hang onto the old buildings! Reuse instead of rebuilding. I saw the old Seattle get torn down and replaced with a newer, shinier, ultimately inferior version. There's so much good architecture and potential in Pittsburgh, from what I've seen, that I hope the city recognizes its own strengths, and builds on them.

Thanks so much, you two. I am REALLY enjoying your music. For a 'guitar drums duo', you have a particular sound that's way more melodic than I expected. So fun! Can't wait till you come back to Pittsburgh.
Posted by Hughshows at 3:30 PM