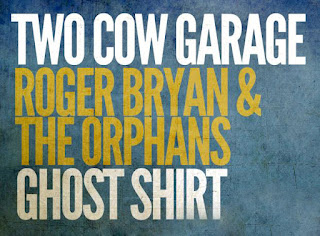 There is a lot going on this Friday but I am definitely going to make it a point to cap off the night at the T'Bird where three very cool bands are going to rock Pittsburgh hard. Being a fan of these bands, I just hope I make it early enough to catch them all. My thanks to Roger Bryan for taking a few minutes to participate in this edition of First/Last.

The first album you ever bought?
Metallica’s “Black Album” when I was 11.

Your last album bought?
The last new record was M. Ward, “Highway Companion” along with the Uncle Tupelo “Still Feel Gone” vinyl reissue. Wait, I picked up a used REM “Document” at a record show after that.

Favorite album of all time?
It might be “Highway 61 Revisited”.

First concert attended?
The Rolling Stones “Voodoo Lounge” tour in Toronto when I was 14.

Favorite concert ever?
There are a few favorites but Mudhoney at Mohawk Place was special. I used bug my friend Donny about bringing them and it was never gonna happen. But about 4 years years later he brought them. Amazing show. Up close for the whole thing. Never thought I'd get to see them. Got to meet them and get a bunch of records signed. Good guys.

Any thoughts, experiences about Pittsburgh?
We've always met nice people and had good shows there. I think it's a gorgeous place.

Thanks Roger. Can't wait to finally see you guys play! 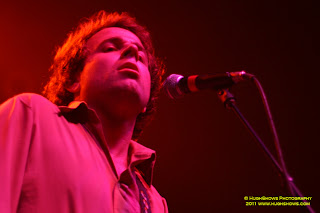 Dawes are awesome! I have been lucky enough to catch them twice here in town previously and they return next week to play a free show with Sara Watkins opening up. Musically, this years Arts Fest is one of the best in recent years with the inclusion of Dawes certainly being one of the reasons why. Main man Taylor Goldsmith was cool enough to take a few minutes to participate in this edition of First/Last.

The first album you ever bought?
Weezer's “Blue Album”, I think.

Favorite album of all time?
Toss up between Warren Zevon self-titled,
Hejira” by Joni Mitchell and “Master And Everyone” by Bonnie 'Prince' Billy.

Least favorite/most disappointing album?
I guess I don't have one.

First concert attended?
Probably one of my dad's.

Least favorite concert?
Don't have one.

Any thoughts, experiences about Pittsburgh?
We've had only fun shows in Pittsburgh and look forward to getting back. I also like how the football stadium seems almost as big as the city.

Thanks, Taylor. Always love seeing you guys play and next week will be no different, I'm sure.
Posted by Hughshows at 7:00 AM No comments: 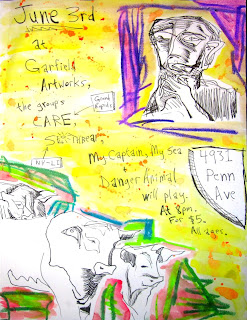 "Born b/w September 1988 and February 1990 and active since 2008, Slothbear recorded Slothbear EP in spring 2008 on a broken 4-track. Some people liked it, others did not. In fall of 2010 Slothbear recorded a new EP, "Canter On", in Josh's dilapidated old house. More autumnal and wistful, Cee once tweeted that the release was "more depressing with vaguely krautrock leanings spooky piano doug sings etc etc" and also postulated, via Twitter, that "[the] difference between the new slothbear record and the old one can be summed up by the fact that we say areolae where we once said labia."

The band kicks off it's latest tour in Pittsburgh. Check out a video of them performing here. One of the band's guitarists and vocalists Craig Heed took a few minutes to participate in this edition of First/Last.

The first album you ever bought?
Foo Fighters’ “The Colour and the Shape”, or maybe the Godzilla soundtrack with Puff Daddy and the alternate version of ‘Brain Stew’ on it.

Your last album bought?
This is depressingly hard to remember. I remember buying “Odessey & Oracle” by The Zombies the same day I bought Djivan Gasparian's “Art of the Armenian Duduk” CD. My grandpa had just gotten me the instrument and I thought it'd be an interesting listen. It turned out to be extremely disappointing and a good runner-up candidate for the question two numbers down from here, although Grandpa busted out some YouTube clips to assure me the instrument 'could rock.'

Favorite album of all time?
I can't actually answer this question, but the one I've been listening to the most lately has been “The Piper at the Gates of Dawn”. I think I'm more a Syd Barrett fan than a Pink Floyd fan, but this is the best thing he was a part of in my opinion.

Least favorite/most disappointing album?
The three-year wait for The Strokes' “First Impressions of Earth” was fairly demoralizing, though there were a couple good songs.

Last concert?
Saw our friend Dan Arnes's new band Leapling at Big Snow Buffalo Lodge in Brooklyn this past weekend. They were great, especially considering it was their first show.

Favorite concert ever?
To complete this Strokes trilogy, in the throes of my disappointment over “First Impressions”, I found salvation in the form of winning free tickets to see them from K-ROCK. It was one of those cases where the band seemingly knows the fans want the old hits, and they delivered more mightily than ever before.

Least favorite concert?
In the early, rambunctious days of Slothbear, we went to the now-no-more Siren Fest that was held every summer at Coney Island to see Stephen Malkmus & the Jicks. While walking around during the openers we actually ran into Malkmus by the whack-a-mole. Clutching a spindle of the seminal SLOTHBEAR EP, I was too shameful to pull the trigger. Later during his set, we reasoned (we were 18-19 years old) that frisbeeing the CDs onto the stage would make a good impression. My last one was on a crash course for his forehead, had he not incidentally ducked just moments before.

Any thoughts, experiences about Pittsburgh?
Very excited to play this show and see the city for the first time.  Hey, the Pirates are almost at .500 this year!

Thanks Craig. Just to be straight...as of last night the Pirates are exactly at .500 thank you very much. 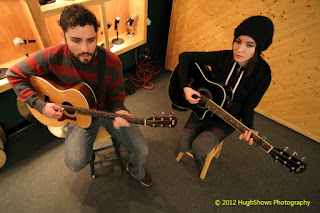 "Morgan Erina & Guy Russo began writing and performing together as Broken Fences in 2010, and have developed a sound that suggests a meeting between Bon Iver and Simon & Garfunkel. They’ve taken their two vastly different worldviews (She’s from NYC, he’s from Pittsburgh, PA), and melded them into an honest and powerful style of indie-folk, one that’s as current as it is timeless."
The band is releasing it's debut album this week at an already sold out show. These two are truly in the DIY category of musicians and I dig them for that. Thanks to both Morgan and Guy for taking a few minutes to participate in this edition of First/Last.

Favorite album of all time?
Morgan: This is a cliché, but I don’t care. I love it, ha-ha! “Nevermind” by Nirvana.
Guy: It's hypothetical. If the ‘White Album’ were cut down to size (one disc) it would be by far my favorite. As is, a lot of nonsense to sift through.

Favorite concert ever?
Morgan: Ray LaMontagne (though we are seeing Radiohead soon, and I love Thom Yorke, ha!)
Guy: Generally, the last great concert I saw. In this case, Ray, but we're seeing Radiohead in two weeks, so we'll see.

Favorite thoughts, experiences about Pittsburgh?
Morgan: The small town vibe, yet city living. Meeting the community of people I know today. Pittsburgh has a kind energy, being from New York City, while NYC will always be my home, it was too competitive for me, while Pittsburgh literally took me in with open arms. Oh yeah, and meeting Guy Russo ;p.
Guy: I've lived here my whole life and we're still on pretty good terms, so I have to say Pittsburgh has been and always will be a great home, no matter where I live.

Thanks you two. Looking forward to the set!
Posted by Hughshows at 12:32 PM No comments:

Image of the Day-"Draw Us Lines" 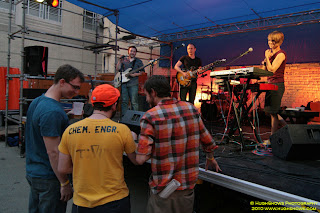 There was an announcement made yesterday that necessarily didn't come as a shock but still was huge in my world nonetheless. My fellow Pittsburgh music bloggers and friends at Draw Us Lines made it clear that this small world I inhabit just may have got a tad smaller. The details can be read here.
Let me just say that these dudes, like almost everyone else I have met in the music community in town, are top notch. So nice. So damned intelligent. So supportive of what I have been trying to do.  They have been so good at spreading the word of what's happening here in Pittsburgh as far as national, and more importantly, local music goes. They have been consistently doing it with grace, expertise, and a whole lot of gumption. Seriously, Echo Chamber ROCKS! I have been dreaming of that stuff for years and those bastards actually did it! I thank them for that and everything in between. DUL has been raising the bar for me and a few others around town and I will always support my friend Brendan in the future in any way I can. Thank you Blake. Thank you Jim.
Posted by Hughshows at 11:35 PM No comments: 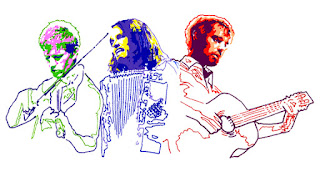 Bowerbirds are coming to Pittsburgh next month. Hard to believe it's been five years since I saw them last. The band are super nice and talented and this is one show I am really looking forward to. 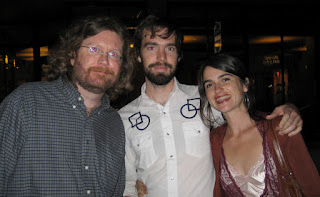 Posted by Hughshows at 11:28 AM No comments:

Image of the Day-"Gentle on My Mind" 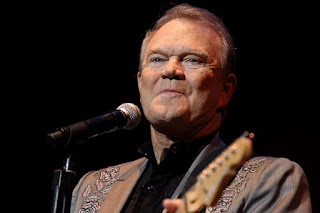 This show was probably the most emotionally uplifting concert I have ever been to. With the obvious elephant in the room whisked away early and quickly as Mr. Campbell started RIPPING leads on his guitar, you could practically hear a collective sigh of relief from the crowd. Sure there were a couple of bum notes here and there but overall, the man  proved what a legend he is. This show will definitely be on a bunch of local year-ends come December, mine included. Another review here. 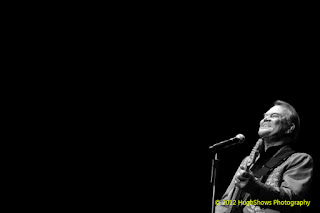 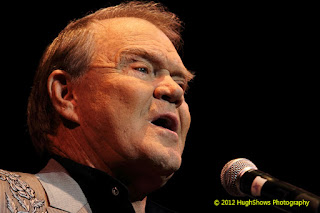 Posted by Hughshows at 10:53 AM No comments: