Image of the Day-"Headboards and Aspirin" 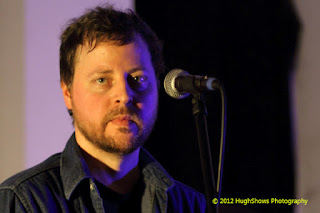 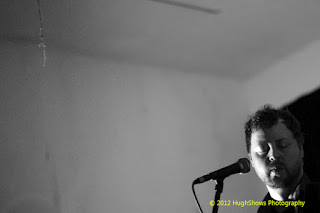 I had zero intention of going out but listened to a couple of songs streaming on the band's site and literally got my ass off the couch to hit this show (after stopping by and shooting Deer Tick earlier in the night). Unfortunately, I missed a few songs from the beginning of the set but man is this band so good. It's actually just Darren Jesse (Ben Fold Five's former drummer) and any studio session dudes he gets to play with him on the albums and perform live with. This is easily one of my new favorite bands as the two most recent albums I picked up at the show are fantastic folk rock that I cannot eject from my player. Hopefully there will be lots more from Darren on this blog in the future. I just love discovering new great bands. 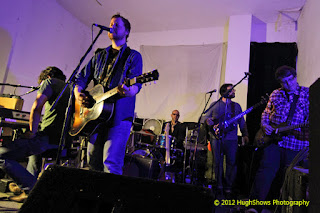 Posted by Hughshows at 8:33 PM No comments: 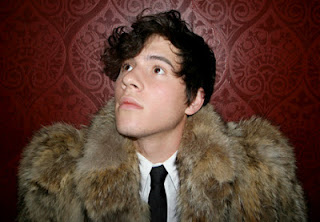 "Emotion is what drives the psychedelic catchy pop rock tunes crafted by the oft-effervescent Brad Oberhofer.    Drawing on influences ranging from Brian Wilson to Descartes, the 21 year old is fixated on the idea of making philosophically minded, energetic melodies that just make people smile."

Touring behind the band's acclaimed debut "Time Capsules II", they wrap up this leg of it tomorrow at the Warhol with guests Young Man. Brad was nice enough to take a few minutes to participate in this edition of First/Last.

The first album you ever bought?
“The Marshall Mathers LP”, by Eminem.

Favorite album of all time?
No favorite.

Favorite concert ever?
I'm not completely sure what my favorite concert of all time is, but one of the most fun concerts i've been to in the last year was definitely Thee Oh Sees at a place called 285 Kent in Brooklyn.

Least favorite concert?
I can't think of any concerts that I’ve been to that I’ve really disliked.

Any thoughts, experiences about Pittsburgh?
Jerry's Records is my favorite record store in America.

Thanks Brad. Really looking forward to your set, especially after watching you light up Coachella!
Posted by Hughshows at 5:39 AM No comments: 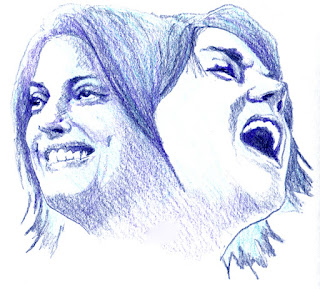 Tonight is another jam packed night for me. With no less than three shoots, timing is everything. I should be front row and center for the Sharon Van Etten gig at the Lecture Hall in Oakland. That will be my second gig of the night and if I don't fall over, I will be heading out to Art All Night afterwards. If I ever come across as ungrateful, believe me, it's just utter exhaustion creeping in. I love being able to do this. 'Dream Job' for sure.

Posted by Hughshows at 12:18 PM No comments:

Image of the Day-"Rye Whiskey" 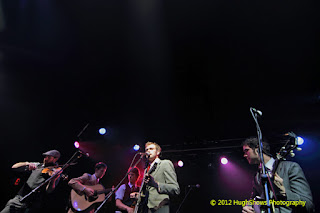 I do like the Rex. Since Ben's put in a new lighting grid what's not to like, right? Getting some easy, awesome shots has become a breeze, no, a joy to shoot there. But considering the GA floor without any space between audience and stage, that makes getting up close work. What kind of work you ask? Well, you either be patient and stand for two hours at the lip of the dusty stage (no disrespect but every stage in this town is dirty) and claim your spot or, as I have found out a couple of times this past week, wait until the opener is about to come on and drunkenly elbow your way through with any disregard to anyone or anything in your way. Not being a Prima donna or anything, it's just not worth it to me anymore. Guess who has two thumbs and will only shoot soundcheck from now on? This dude.
The bands were cool, sure. My photos are bangin' as usual, I'm not shy. It's just that getting beer spilled on your pants, and worse, your lens kinda sucks. You think I sound bitter now, wait until my Deer Tick review, UGGGGH...You can check out some Jesca Hoop fawning here. More photos here. 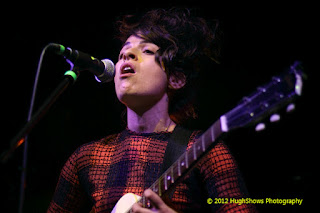 Posted by Hughshows at 9:35 PM No comments: 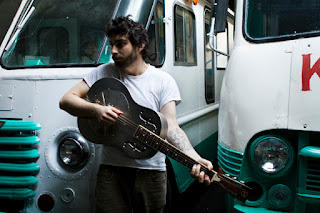 "Leland Sundries' new EP, The Foundry was released in February 2012. The band is the brain child of Nick Loss-Eaton who played guitar, banjo, harmonium, harmonica, and vocals on the EP. Their last record received praise from The New York Times, who declared “...dedicated to storytelling in a way that recalls Woody Guthrie and his Folkways brethren. [Their] scrappy Americana will get you longing for empty two-lane highways and kudzu-encased back porches."

The band is touring in support of the EP and stops at the T'Bird in Pittsburgh this Sunday on a bill with Weathered Road and Joan Hutcheson. Score your tickets here. Nick was nice enough to take a few minutes to participate in this edition of First/Last.

The first album you ever bought?
Hard to remember the first album I bought on my own. It was probably a Beatles tape or Chuck Berry's “The Great 28”.

Your last album bought?
I just picked up the new Ray Wylie Hubbard and a '90s Flat Duo Jets album in Saratoga Springs, NY while on tour.

Favorite album of all time?
It feels kind of cliché after the recent reissue, but the Stones' “Exile on Main Street”.

Least favorite/most disappointing album?
In high school and early college, I was getting way into Bob Dylan. He's one of the reasons that I play and write and I started picking up his catalog, mostly in used LPs, tapes, and CDs that I'd find. But I didn't know better and I was a completest so I picked up “Knocked Out Loaded” in the new tape cut-out bin at a Tower Records. One good song and otherwise utter shit. It's amazing that that man can be so brilliant one moment and so, uh, not brilliant the next.

First concert attended?
Paul McCartney, Foxboro Stadium, 1989. He and I share a birthday.

Last concert?
Other than tour openers, Spirit Family Reunion at Bowery Electric. They were amazing!

Favorite concert ever?
Oh man, hard to pick! Dylan 1999 in Amherst was amazing. Levon Helm's Midnight Ramble in 2009 in a snowstorm with the fireplaces going. The first time I saw Todd Snider. Ramblin' Jack Elliott at the Ruben unplugged with no PA. I can't pick just one.

Least favorite concert?
The Vines. They were clearly way too fucked up to play or sing or even stand up

Any thoughts, experiences about Pittsburgh?
Never been but curious to explore it! I read ‘The Mysteries of Pittsburgh’ by Michael Chabon and I have an image of old brick factory buildings with tall smoke stacks and wondrous things happening inside.

Thanks Nick. You share a B-Day with Sir Macca, huh? That's cool. Small world, so do I! My brutha!
Posted by Hughshows at 5:00 PM No comments: 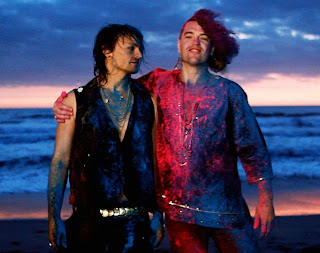 "Shawn Harris and Jake Griggs are best friends, and both singers. It's just heaps easier. They make records, print art, and do parties at their house; first in Sydney, and currently in Los Angeles. Recently, they hitch-hiked to NYC from Barstow, with only a ukulele, and guitar, and a camera."

They bring their party to Smalls this Saturday on a bill with Foxy Shazam, Cadaver Dogs and Dazzletine. Score tickets here. Shawn and Jake were nice enough to participate in this edition of First/Last.

The first album you ever bought?
Jake Grigg: Milli Vanilli, “Blame It On The Rain”.
Shawn Harris: Smashing Pumpkins, “Gish”.

Your last album bought?
Jake: It was like 10 years ago, I don't remember.
Shawn: Tame Impala, “Inner Speaker” (on vinyl).

Any thoughts, experiences about Pittsburgh?
Jake: I have never been and I know nothing about the place.
Shawn: I love Mr. Small’s.

Thanks guys. Saturday should be rocking in Millvale for sure!

Posted by Hughshows at 5:00 AM No comments: 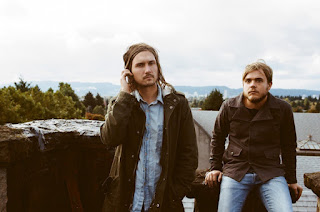 "Listening to Greylag's debut EP, The Only Way To Kill You, one can almost hear the relief pouring out of Andrew Stonestreet and Daniel Dixon's gentle, lilting harmonies and spare, acoustic guitar murmurs. Although new on paper, the Portland, Oregon-based band is the product of a multi-year, cross-country journey of friendship, emotional trial and self-refinement that while finally complete, is really only just beginning. In the past year, Greylag has worked at developing their home base in the Pacific Northwest, reaching sell-out status in their home town of Portland along with recent tours through the western US and Canada. This last fall, Greylag was part of the Gomez and Kopecky Family Band tour and is expected to support a few high profile tours in the first part of 2012.  Greylag's Debut EP, The Only Way To Kill You, is due for release on Ninth Street Opus Records in May 2012."

The band bring their music to Smalls this Friday opening for Augustana. Andrew and Daniel were nice enough to participate in this edition of First/Last.

The first album you ever bought?
Daniel Dixon: The first album I remember buying for myself was The Cranberries’ “No Need To Argue”. I loved that sad stuff and had a major pre-adolescent crush on Dolores O'Riordan.

Favorite album of all time?
Daniel: That's almost impossible to answer-- but a record I never seem to tire of, that always feels right, is Fionn Regan's ”The End of History”.

Least favorite/most disappointing album?
Andrew: Probably all of my favorite artists because I always wish there were more tracks on their albums.

First concert attended?
Andrew: I honestly can't remember. It was so early on in my life when I started going to shows and it’s all just a blur. The first one to leave an impression was probably Arcade Fire though.

Last concert?
Daniel: Besides the one we played last night? I think it was a show with a couple of great Portland bands called Wild Ones and Pure Bathing Culture.

Favorite concert ever?
Andrew: I remember thinking the most beautiful show I'd seen was the first time I saw my friends Sebastian & Catherine's band Come Gather Round Us. So many amazing ones though.

Least favorite concert?
Daniel: I don't usually stick around a show if it looks like I'm not going to enjoy myself.

Any thoughts, experiences about Pittsburgh?
Daniel: I played a show there a couple years ago, and a guy at an Italian restaurant told me he was going to spit in my food because I put my order in too late. He was joking, I think.
Andrew: Going to Pittsburgh was one of my earliest memories traveling. I have family living in Bethel Park and there's a fondness of my time there. It still lingers.

Thanks fellas. Can't wait to hear the full EP.

Posted by Hughshows at 6:03 PM No comments: