"Three artists from three extremely different ends of the music spectrum, inspired by technology and the constant pursuit of innovation, have combined to form little good bad ( + - ). A soulful pop singer, a punk rock drummer and an electronic producer make up this hybrid pop group of musical misfits."

little good bad (+ -) is a new musical collaboration from Pittsburgh who have just released the video from their debut single today entitled "No Regrets" which you can download for free at their website. The band will be releasing a new single as a free download every month. Expect some very cool things to come.
Posted by Hughshows at 12:57 PM No comments: 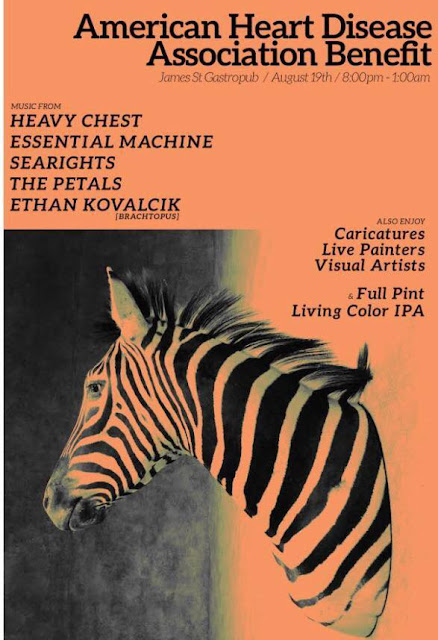 There is a cool benefit show going down tomorrow (Saturday, August 19) at James Street Gastropub for the American Heart Association featuring a bunch of blog faves including Heavy Chest, Essential Machine and The Petals. Opening the night will be an acoustic set from some members of reggae jamsters Brahctopus. I want to thank lead 'Brah' Ethan Kovalcik (Ukulele/Vocals) for taking the time to participate in this edition of First/Last.

The first album you ever bought?
50 Cent- Get Rich or Die Tryin'. I was young and bought it from a kid on my school bus thinking I was cool since it had a "parental advisory". I absolutely hated it.

Your last album bought?
State of Mind by Quincy Mumford & the Reason Why. Great funky friends from Asbury Park, NJ!

Favorite album of all time?
Sublime - 40oz.to Freedom. Bradley Nowell is one of my biggest influences; without that album I wouldn't be playing the style of music I am today.

Least favorite/most disappointing album?
Anything from Nickleback or Buck Cherry... Or maybe the 50 Cent one. That's a toss-up.

First concert attended?
*NSYNC when I was 9 years old at Star Lake Amphitheater. And no, I'm not embarrassed by that!

Favorite concert ever?
Has to be the first time I saw Phish. I was a freshman in college and traveled to Cincinnati with some close friends. It was quite an epic trip!

Least favorite concert?
The time I went to Warped Tour in high school. I didn't really enjoy any of the music and I also had a minor run in with the police.

Favorite thoughts, experiences about Pittsburgh?
My favorite thing about Pittsburgh is how the local music scene is coming together. It's really starting to flourish for all genres of music. Everyone is working together to set up gigs, festivals and we're starting to see a huge burst of combining the visual arts with the music. It's a great time to be a Pittsburgh Musician!


Thanks, Ethan. Should be a sweet time tomorrow. So tell me how you define 'minor' run in?
Posted by Hughshows at 9:00 AM No comments:

Some Kind of Animal is a Pittsburgh based neo-folk band who released their latest eponymous album this Spring via the Get Hip Records Folk Series.
After killing it at the Deutschtown Music Festival a few weeks a go, this week they are all over WYEP as the featured band on The Local 913. as well as cover band to this month's print edition of Sound Scene Express.
Today I bring you the music video to my bud's Ben favorite track on the album, "Midnight." Created by Nick Francis and starring actress/dancer Hannah Vassallo, the images match the mood and atmosphere to the song perfectly.
The band has been a blog fave for awhile and I am really looking forward to what they do next.
Posted by Hughshows at 9:20 AM No comments:

Labels: Get Hip Records, Music Video, Some Kind of Animal 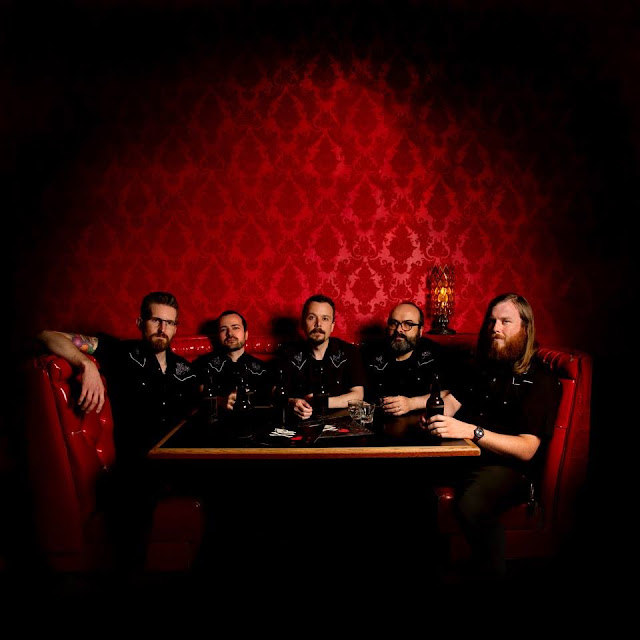 "The hardest working band in Pittsburgh. The Beagle Brothers have been Pittsburgh's premiere country band for over 10 years. They are the foundation of the "Bloomfield Sound," which mixes honky-tonk and classic country with an accelerated, high energy performance."

The Beagle Brothers area Pittsburgh institution. Don't believe me? They have their own day in the City of Pittsburgh (December 12th, 2015.) They are the house band up in Punxsutawney during the annual Groundhog Day festivities. They even made the cover of the City Paper to mark the release of their 4th album, Dancers of the Drunken Two-Step. Now the Brothers are set to release their latest offering entitled Hearts Go By this Friday (8/4) with a banger at Howler's bringing along blog faves André Costello and the Cool Minors and Kayla Schureman for the ride. Much thanks to Ezra Smith (Drums), Gabriel Smith (Vocals/Acoustic Guitar). Kyle Kline (Bass), Noah Smith (Vocals/Acoustic Guitar), and Read Connolly (Pedal Steel) for taking the time to participate in this edition of First/Last. 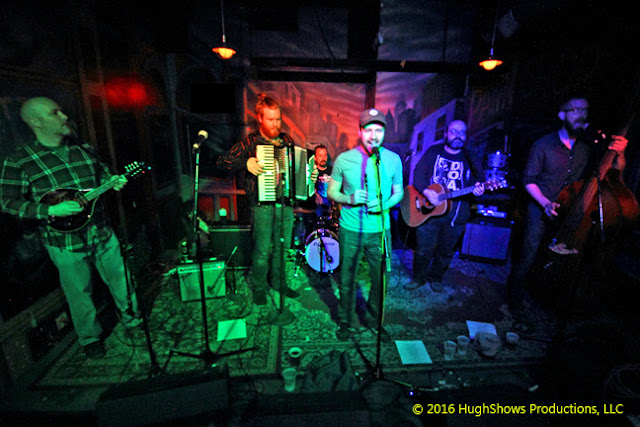 The first album you ever bought?
Ezra Smith: Beggars & Thieves - Beggars & Thieves.
Gabriel Smith: Twisted Sister – Stay Hungry.
Kyle Kline: Michael Jackson - Thriller. My memory of this is foggy, but my mother clearly remembers the night we purchased the cassette at National Record Mart.
Noah Smith: Starship - Knee Deep in the Hoopla.
Read Connolly: "Weird Al" Yankovic - Bad Hair Day. I liked it so much, I bought it twice, so I could have a cassette version to play in the car.

Your last album bought?
Ezra: Ted Leo and the Pharmacists - Living with the Living.
Gabriel: The Biters – The Future Ain’t What I Used to Be.
Kyle: The Sons of the Pioneers - Cool Water and Seventeen Timeless Western Favorites. Total "old man" crooner Country and I love it!
Noah: Leonard Cohen - You Want it Darker.
Read: Charley Pride - In Person. I've been obsessing over the pedal steel playing by Lloyd Green on this record. Last week I found a mint copy on the shelves at Jerry's Records for $3. Miss you already, Jerry.

Favorite album of all time?
Ezra: The Clash - London Calling.
Gabriel: Rocket From the Crypt – RFTC or The Hellacopters – Rock and Roll Is Dead.
Kyle: Lately it's been a toss-up between Fela Kuti - The Best of the Black President and Merle Haggard and the Strangers  - Swinging Doors...
Noah: Urge Overall - Exit the Dragon.
Read: I'm too mercurial to commit to a favorite record. My favorite right now is Nicole Atkins - Goodnight Rhonda Lee.

Least favorite/most disappointing album?
Ezra: The Dismemberment Plan – Change.
Gabriel: Robbie Fulks – Upland Stories or Happy.
Kyle: I was excited about Drake - VIEWS, but thought it ended up being a dud.
Noah: Weezer - Blue Album.
Read: Most recently, Katy Perry - Witness. I am a big fan of her last two records, especially her work with Max Martin. They've made great pop music together! Unfortunately, Witness has none of the fun or staying power of her last two records.

Favorite thoughts, experiences about Pittsburgh?
Ezra: Partying in the iced-over streets of Bloomfield after the Steelers' 2005 Super Bowl victory; watching the city grow and change in the 15 years since I started college here.
Gabriel: Playing music with my brothers and closest friends. Seeing new vegan restaurants pop up in the city.
Kyle: Making music with my best friends, playing in front of 20,000 people at 4 AM, "Beagle Brothers Day," playing "Big River" with Bill Peduto, stage diving/crowd surfing at Pittonkatonk and Howlers, running the Great Race and the Half Marathon.
Noah: First Karl Hendricks sighting after moving to Bloomfield in 2005, Slim Cessna at the Sunday Night Hayride, Johnny Cash Day, Using my awkward flirting skills to court a particular Whole Foods cashier, the birth of my daughter.
Read: The 2013 National League Wild Card game, Game 7 of the Eastern Conference Finals in 2016 and 2017, Working with Rick Sebak, Learning how to remodel a kitchen, Being made fun of on "The Daily Show" with my best friends.


Thanks, fellas. Very cool resume there, guys. Friday should be a blast. Here's a fun fact, I technically saw you for the first time in 2006 as I walked in Belvedere's during the last few seconds of your final song. To this day, I am still miffed that I missed your set.
Posted by Hughshows at 12:16 PM No comments: