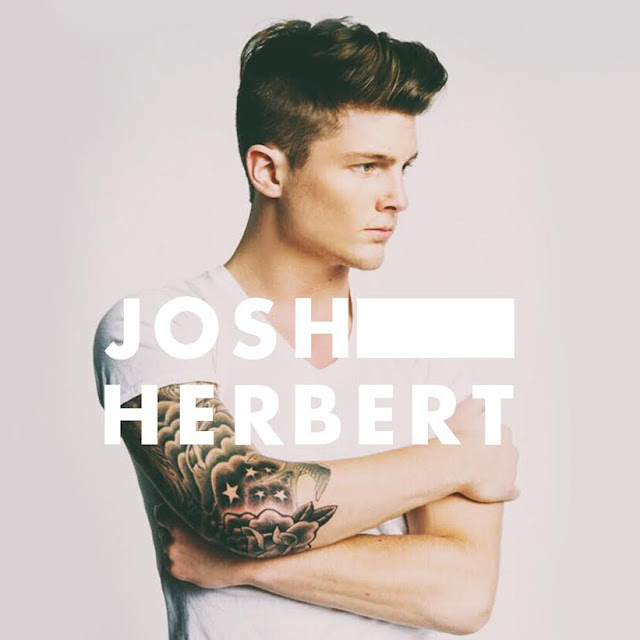 Josh Herbert is an up and coming singer-songwriter from Pittsburgh who's latest release is his self-titled debut full length. You can catch him next performing at Jergel's on Wednesday (12/2) as I thank him for taking the time to participate in this edition of First/Last.

The first album you ever bought?
Lynyrd Skynyrd Greatest Hits.

Favorite album of all time?
The Beach Boys Pet Sounds.

Least favorite/most disappointing album?
I don't know if i have a least favorite, there is something I like about every album I've bought.

Least favorite concert?
I don't think I have one.

Favorite thoughts, experiences about Pittsburgh?
I am fairly new to playing out in the Pittsburgh music scene. My first show there was a little under a year ago. So far it has been a great experience and every person I have met along the way have been nothing but positive and influential.

Thanks, Josh. Great choice on The Beach Boys album. If I have to be honest though, I am particular towards their SMiLE record but what do I know?
Posted by Hughshows at 6:44 PM 1 comment: 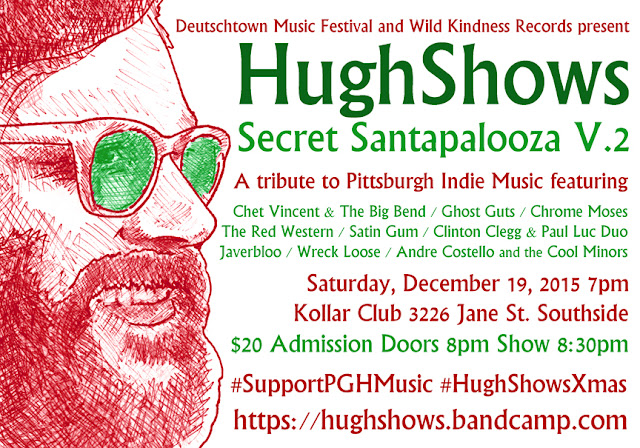 This is easily going to be the holiday party of the year, folks! Your favorite Pittsburgh bands covering your other favorite Pittsburgh bands. We really want you to be there. So, in the spirit of the season, I am giving away a pair of tickets to the show for this week only. From now until Friday, December 4th when I will randomly draw a name from the entries good for two passes to the show, all you have to do to enter is follow me on twitter if you don't already and tweet the above image with

I will pick a winner on Friday. You must be +21 to enter. Thanks and GOOD LUCK! 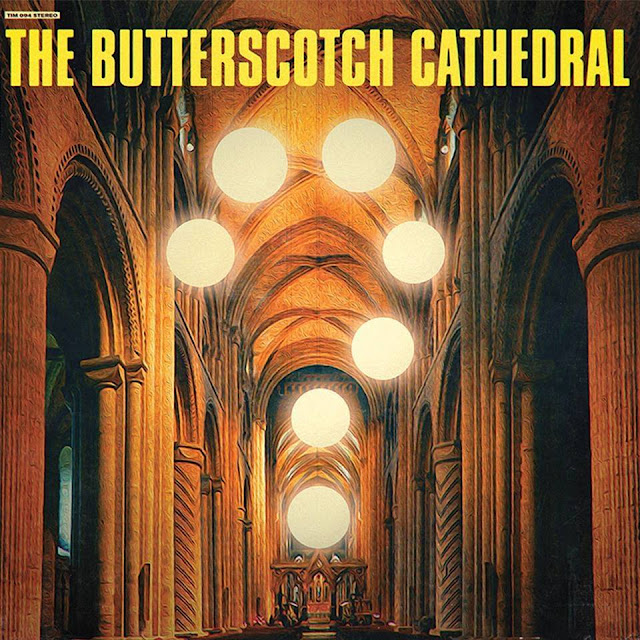 "Plenty of great music has been the byproduct of a singular vision; that "man-alone" in the studio producing genius works; Brian Wilson, Curt Boettcher, Pete Townshend have all chained themselves to the mixing console (metaphorically speaking) for the sake of music as something "more". Tuscon, AZ's Matt Rendon know plenty about being the "man-alone" in the studio. Ever since he debuted The Resonars in the early Nineties - a project that started out as a band, dissolved & then just became the fictional "band" identity for Rendon alone - he's produced six albums of Sixties mod-inflected power pop all by himself in his home studio. The Butterscotch Cathedral is the latest album from Rendon & his first project outside of The Resonars since 2004."

The Butterscotch Cathedral is a 'crummy desert psychedelic' band from Tuscon, AR who's debut LP is available now from Trouble in Mind Records. Taking influences from The Beach Boys, Todd Rundgren, The Who and Tame Impala, the music hearkens back to sixties and seventies psych pop while still sounding fresh. I want to thank Matt Rendon (Guitar/Vocals) for taking the time to participate in this edition of First/Last.


The first album you ever bought?
The first albums I remember buying are The Rolling Stones cassettes on Abkco - Aftermath, Between The Buttons. They were odd in that they switched the A and B sides so when I got the LPs years later, it was a shock not to hear “Flight 505” and “All Sold Out” as lead off tracks.

Your last album bought?
Mono versions of All Summer Long and Shut Down Vol. 2 by the Beach Boys.


Favorite album of all time?
The Who - My Generation.

Last concert?
Saw of Montreal at a festival here in town. I had to cut out the last 15 minutes or so because a band I'm in, Lenguas Largas, was playing the next stage over.

Favorite concert ever?
Guided By Voices in Tempe, AZ on their Under The Bushes tour. At that time musicians were not allowed to drink onstage in Arizona and GBV played extremely loud and pissed off. Pollard almost got into it with a security guy – “Pimple Zoo” was particularly great.


Least favorite concert?
That's a tough question because most of the show I go to are in clubs, if you don't like a band you can get a beer. I probably wouldn't dish out the dough for a show that might disappoint me. I saw a not too great version of the Angry Samoans a few years ago.

Any thoughts, experiences about Pittsburgh?
I know that I love Iron City beer and that my former record label, Get Hip, is based there. I'm a big fan of Roberto Clemente and the 70s Steelers defense. I've only been there once and it was a flight layover. I was with my brother Rick and landed really late - a cabbie took us straight to a strip bar when we asked to go somewhere for a beer.

Thanks, Matt. Wow, I cannot imagine a 'sober' GBV playing a show. Now that's a rarity.
Posted by Hughshows at 5:37 AM 1 comment: 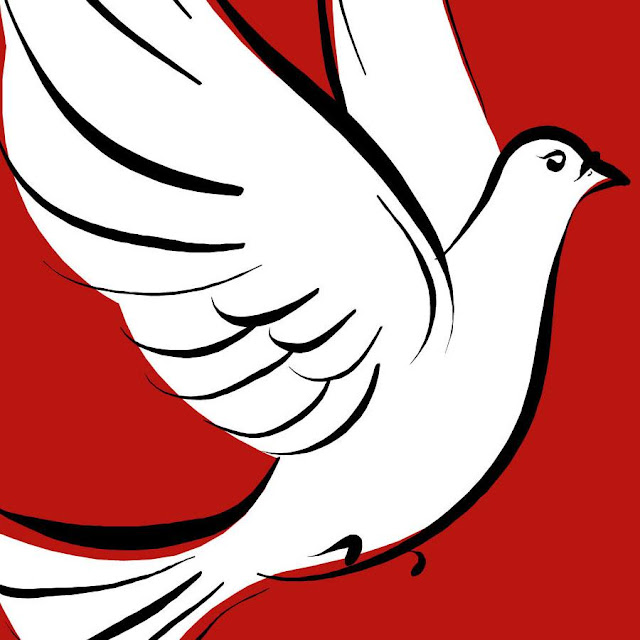 The Dovewires is a rock band from Pittsburgh who will be joining me at James Street Gastropub Ballroom Upstairs this Sunday (11/22) at 3 pm as I host one of the PGH for Peace benefit concerts organized by Ziggy Sawdust Productions. With over 60 bands donating their time and talent in over 7 venues citywide, the Pittsburgh music community has come together to show that love and music is one response to the insanity of the terrorist attacks in Paris and Beirut. Please consider joining us as I thank Todd Knepp (Guitar/Vocals), Oliver Dugas (Drums/Vocals), and Paul Bossung (Bass/Vocals) for taking the time to participate in this edition of First/Last.

Your last album bought?
Paul: Weezer Everything Will Be Alright in the End.
Ollie: The Black Angels Directions to See a Ghost.
Todd: Strung Out An American Paradox.

Favorite thoughts, experiences about Pittsburgh?
Two of us are born and raised in Pittsburgh (Paul & Todd). Oliver was born just outside of Philly. We all dig the music scene here, getting noticed is quite hard and every band seems to have that problem. People don't really get out and see live music like they used to. I mean don't get me wrong the dedicated fans always show up but most people seem to shrug their shoulders. That hurts the musicians that are really trying to make this a passion and lifestyle but who knows, "times they are a changing". We just want people to understand and like what we are putting out. We just want to get as much exposure to do so. We love music, it’s our outlet, our art, our understanding. It’s what we do.

Thanks, fellas. Looking forward to seeing you play Sunday. Let's try to have some fun.
Posted by Hughshows at 8:08 PM 1 comment: 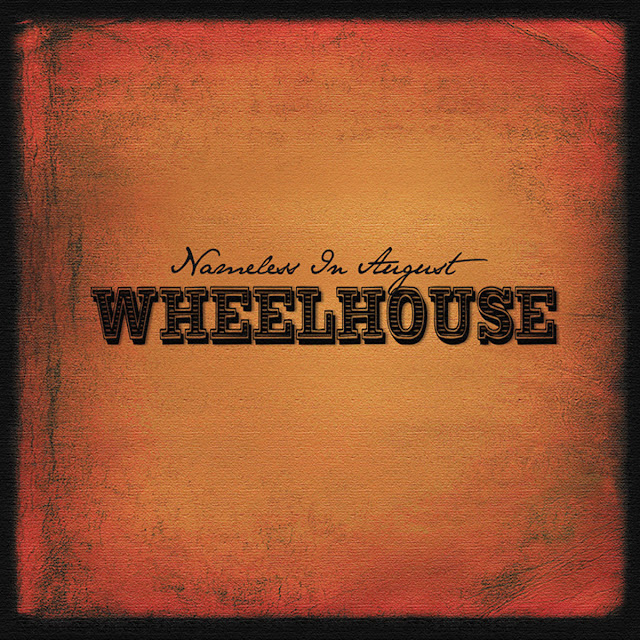 "The band got their start when, lead singer, Zach Rock met banjoist, Jason Buzon at a Brookline, Pa coffee shop. The two made plans to meet later that week and they began writing music from the first session they had and have continued to do so since April of 2011. Later on in October of 2011, Patrick McGinley joined the duo that was playing out as Nameless in August. Patrick heard the two as they were hosting an open mic night at a South Side bar in Pittsburgh called The Blind Pig. A bar in which Patrick lived above. A friend that was with Patrick that night persuaded him walk up the stairs from the bar and grab his instrument and jam with the two just for the night, just for fun. But he is yet to leave."

Nameless in August is a folk rock band from Pittsburgh who will be joining me at James Street Gastropub Ballroom Upstairs this Sunday (11/22) at 1:40 pm as I host one of the PGH for Peace benefit concerts organized by Ziggy Sawdust Productions. With over 60 bands donating their time and talent in over 7 venues citywide, the Pittsburgh music community has come together to show that love and music is one response to the insanity of the terrorist attacks in Paris and Beirut. Please consider joining us as I thank Zach Rock (Guitar/Vocals) for taking the time to participate in this edition of First/Last. 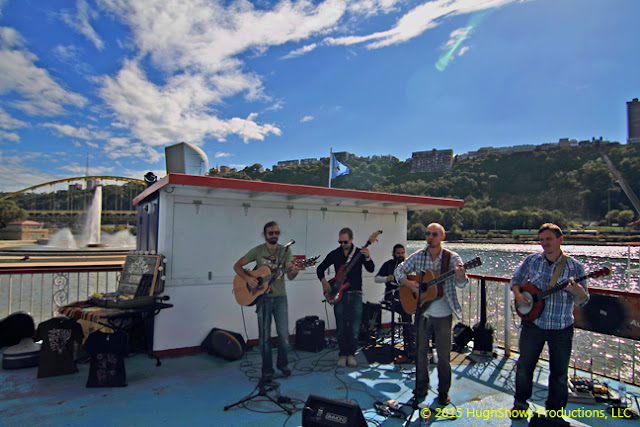 The first album you ever bought?
It was either Sixteen Stone by Bush or Rock Spectacle by Bare Naked Ladies. I think my sister gave me the Bush album. So, first bought may have been the BNL live album which I still love and listen to today.


Your last album bought?
Technically, Stop Making Sense by Talking Heads. I'm still digesting it though. Before that Stirgull Simpson's Metamodern Sounds in Country Music. Which is SOOO good. It's my most recent, newest love affair.


Favorite album of all time?
Toss up between Before These Crowded Streets by Dave Matthews Band and Emotionalism by The Avett Brothers. If I had to choose one, DMB.


Least favorite/most disappointing album?
Likely an album that I don't own. I'm sure I've been disappointed with releases of artists that I like but I don't really hold an album as my least favorite.


First concert attended?
Bush at Civic Arena. (First beer too. It was GROSS)


Last concert?
Hmmm, not going out to see them as much as I'd like. I feel there is a separation with me because just about every show we play another band is playing so I see/hear music a lot. But the word "concert" is different. So, we played with Glove this summer and I definitely stayed and listened to that show and it felt like a concert. Same scenario when DMB was at First Niagara this summer.


Favorite concert ever?
Joe Purdy at The Basement in Columbus.


Least favorite concert?
No such thing as bad sex and bad concerts. Gotta appreciate. Although, the next time I saw Joe Purdy after seeing the best show of my life, I was disappointed by it. Must have set the bar too high.

Favorite thoughts, experiences about Pittsburgh?
Lived here seven years... Met a great girl, Had a daughter, I get to play music and express myself constantly in a beautiful region with band mates that I truly love. It's a cultured city not far from a little bit of chew spit. I love it.

Thanks, Zach. Looking forward to seeing you on Sunday, although I wish it was under different circumstances.
Posted by Hughshows at 6:11 AM 1 comment: 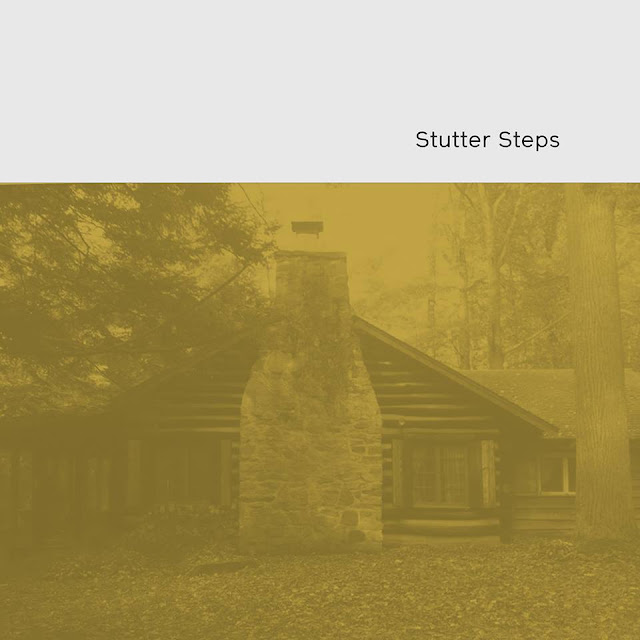 "Fall will soon be upon us, and everywhere are the signs of impending death, but Stutter Steps is a beacon of warmth and light. It radiates youthful energy and hard-earned wisdom. It’s bookended by two different versions of the same song, just like Yo La Tengo used to do. It’s stunning and wonderful and broken and bliss. Just like you. Just like me. Just like all of us."

Stutter Steps is an indie pop band from songwriter Ben Harrison. Ben also happens to be the performance curator at the Andy Warhol Museum and is releasing his debut album this Saturday (11/21) at the Elks Lodge #339 on the Northside. Gathering various friends to record and now perform his songs, I want to thank Ben for taking the time to participate in this edition of First/Last. 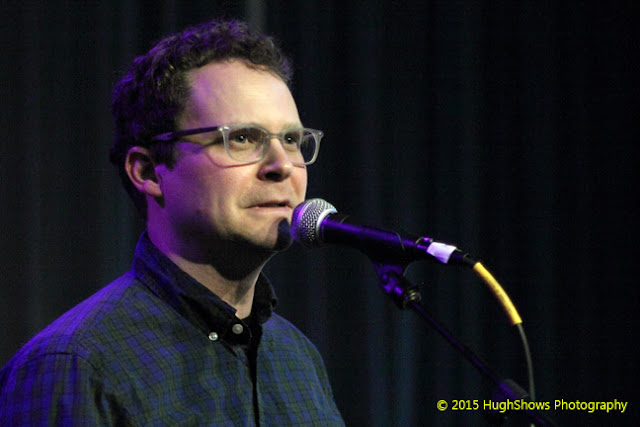 The first album you ever bought?
Bruce Springsteen Born in the USA.


Favorite album of all time?
The Beatles Rubber Soul.


Favorite concert ever?
The Wedding Present (on Watusi tour in Toronto 1994).

Thanks, Ben. I've known you for years and never knew you had this in you! Lovely stuff, man.
Posted by Hughshows at 5:41 PM 1 comment: