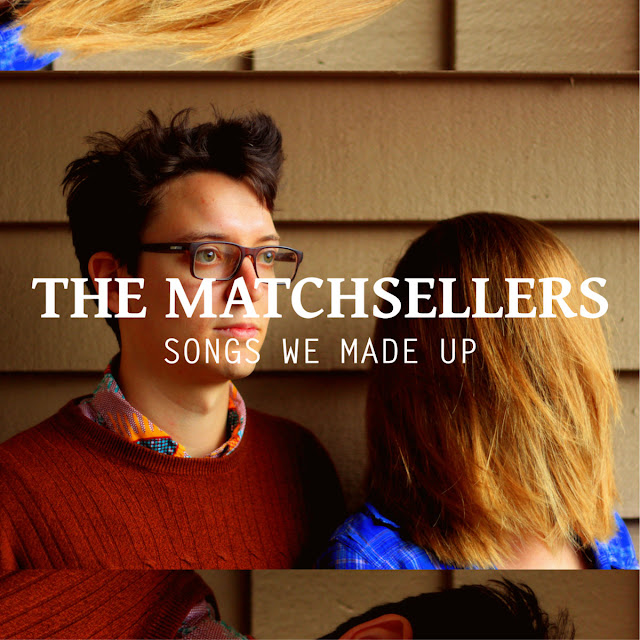 "The Matchsellers is a bluegrass duo that began in the streets of former East Germany and now crisscrosses the US Interstate system year-round. Julie Bates is a classically trained violinist from Kansas City, Missouri, and Andrew Morris grew up playing electric blues guitar in the dive bars of Warsaw, Indiana."

The Matchsellers is a Midwest old-timey bluegrass duo who are in the midst of their New Year Tour celebrating the 2016 release Songs We Made Up. Comprised by two musicians who hailed from different cities, Andrew Morris (Guitar/Vocals) and Julie Bates (Fiddle/Vocals) met while working in Germany. They hit Pittsburgh tomorrow (1/24) at Acoustic Music Works in Squirrel Hill and I want to thank Andrew for taking the time to participate in this edition of First/Last.

The first album you ever bought?
Smash Mouth Astro Lounge. I think the lead singer of that band is Guy Fieri's long lost cousin.


Your last album bought?
Balfa Brothers Play Traditional Cajun Music Vol. 1 & 2. I love the “Newport Waltz”. It has such a beautiful melody, and yet the lyrics are not much more than a brown-nosing advertisement for the Newport Folk Festival.


Favorite album of all time?
How can somebody expect me to answer this? I guess I'll say the album that turned me onto acoustic bluegrass music and really changed the trajectory of my life was Sleep With One Eye Open by Chris Thile & Michael Daves. I unabashedly tried to rip-off what they were doing for a long time and failed at it.


Least favorite/most disappointing album?
Honestly, I was disappointed with Bob Dylan's New Morning. Sure it's got some good, even great moments like “The Man in Me” and “If Not For You.” And I could probably get over the fact that some of the songs are a bit annoying “Neeewwwwwwwwwww Morning” , “Day of the Locusts.” But the song “If Dogs Run Free” really ruined that album for me. I just don't get it. Can't wrap my mind around that song. Apparently, lots of people love that song and that album. But if I'm 100% honest with you, I was disappointed.


First concert attended?
Three Dog Night at the Center Lake Park in my hometown of Warsaw, Indiana. I remember it was my 5th or 6th birthday and I didn't want to go. So my dad put a funnel in my mouth and poured Budweiser down my throat and I wound up having a really good time. It's amazing how beer can change your mind.


Last concert?
Goldmine Pickers in Goshen, Indiana. They were THE acoustic band in Northern Indiana for a time, but now are pretty much split up. Jay currently plays with the Steel Wheels. Sean and Adam are in a great Irish group called Soltre. Luke teaches at the folk school in St Louis. Though not all of the original members made it to play the concert, enough were there to make it a really good time. I really admire and look up to those guys.


Favorite concert ever?
Another tough question. A great concert that is sticking out in my mind right now was Jonathan Richman at The Artmosphere in Lafayette, LA. In high school my friend Jill burned me the Modern Lovers CD because she said my voiced reminded her of Jonathan Richman. He exudes so much joy on stage, it's amazing. It was just him, his nylon acoustic guitar and this drummer Tommy Larkins, who was groovy as hell. The space was really small so we were right next to him. Everyone was dancing. My homeboy Dave Riot was running the board, so the sound was perfect. Icing on the cake.


Least favorite concert?
I played trumpet in high school. One Veteran's Day or Memorial Day, the band played a concert somewhere at some cemetery for all of these old people and veterans. Everyone in the audience was wearing a baseball cap. At least that's how I remember it. Anyway, at one point in the concert, a flag was being raised or lowered or folded or saluted or something, and that was my cue to stand up and play “Taps” alone. Solo. A capella trumpet... I botched it really bad. It sounded like a goose being drowned. And it smelled even worse, because I did everything short of pooping myself. I lost every friend I ever had that day. That was my least favorite concert.


Any thoughts, experiences about Pittsburgh?
I was a pretty good kid in school and never got into trouble until I had Mr. Winter in 4th grade. He loved the Steelers and had several Steelers' flags around, so I guess he was from Pittsburgh. Anyhow, once he made me sit in the hall and miss recess because I wrote “poop” on the chalkboard. The man didn't have a sense of humor. I don't think I ever saw him smile. We hated each other. I think on the last day of school I yelled, “Pittsburgh Sucks” while storming out of class and never saw Mr. Winter again. But other than that guy, Pittsburgh seems like a pretty cool place. You put french fries on your sandwiches, right? How can a city that decided to put french fries on a sandwich create a 4th grade teacher who couldn't smile? Maybe he was just upset there was no Primanti Brothers in Warsaw, Indiana.

Thanks, Andrew. Not for nothing but fecal matter seems to play a defining matter in your adolescent years...
Posted by Hughshows at 7:30 AM 1 comment: 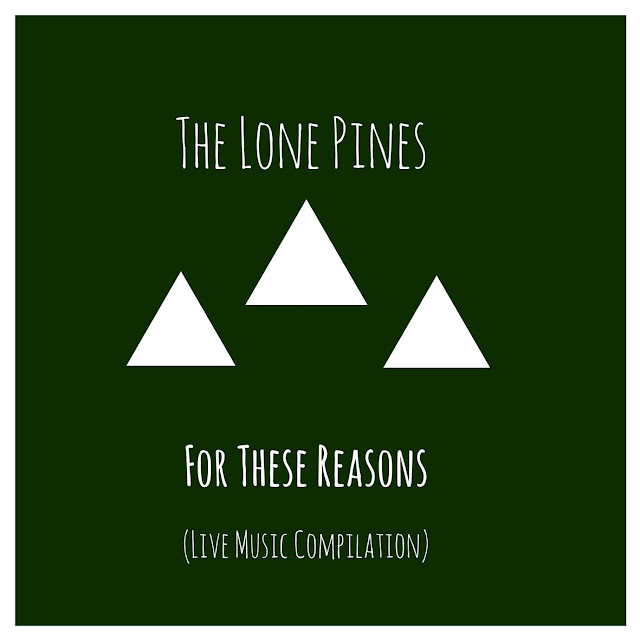 The Lone Pines is a folk rock trio from Pittsburgh who released a live EP last week entitled For These Reasons. You can catch them playing out all around town this upcoming year and I want to thank Anthony Lupinacci (Drums/Percussion/Harmonica), Josh Chamberlain (Guitar/Harmonica/Vocals), and Ricky Lagnese (Bass/Backing Vocals) for taking the time to participate in this edition of First/Last.

The first album you ever bought?
Tony Lupinacci: I was given a Buddy Rich album, I believe it was No Funny Hats by my father when I was 6 or 7. But I think the first album I ever bought with my own money was a compilation of Howlin’ Wolf’s best hits. My family had a really big Jazz and Blues thing going on at the time.


Your last album bought?
Josh Chamberlain: I recently bought two albums on the same day. One was Give It Back To You by The Record Company. I saw them live this summer, and they were badass. I’m surprised it took me so long to actually buy a record of my own, actually. I also bought Hello, I’m Johnny Cash. There are some gems on that record; “Sing a Travellin’ Song,” “The Devil to Pay,” and “Jesus Was a Carpenter” are all great. Found it at Jerry’s.


Favorite album of all time?
Ricky Lagnese: Axis: Bold as Love is definitely my favorite album of all time. As a guitarist this album is loaded with fantastic songs and the other nice thing is that there isn’t a single filler song. I wish I could have been around for the live versions of these songs because you can feel the energy even through the album audio.


Least favorite/most disappointing album?
Ricky: Even though this isn’t an album, I think that “Love on the Weekend” was fairly disappointing considering that John Mayer is known for his guitar playing. I found that this was upsetting to see him move away from his guitar prowess.


First concert attended?
Tony: The first concert I can remember was the Doobie Brothers when they came to Pennsylvania. I think I was 6 or 7. It was outdoors. I remember slapping my thighs and dancing on the picnic blanket with my mom and little sister. My little sister asked what Doobie meant and got a pretty long-winded explanation about modern law from my Father.


Last concert?
Josh: Joe Jarski, Vit Debacco, Morgan Erina, and us last week. Last one I went to and didn’t play at though was Jim Donovan and the Sun King Warriors. It’s always fun to see them because of the crazy percussion stuff they do in their shows. I think Jim Donovan did some throat singing or overtone singing too. That’s the technique that the Tibetan Monks do where they hit a note, but you can hear the fifth harmonic above the note too because they sing it a certain way. So essentially, they’re singing two (or even more) notes at once, and it’s really cool. I’ve been trying to do it ever since I heard Jim do it, but I haven’t had the same success. YouTube it if you don’t know what I’m talking about. You won’t regret it.


Favorite concert ever?
Tony: Probably a tie between Tame Impala and Alt-J. They both still put on an incredible live show with tons of passion and energy.
Josh: Mumford and Sons at Firefly. They had some of the guys from their Johannesburg EP collaboration, and the energy on stage was at a spiritual level. That EP came out the weekend of Firefly too, so a lot of that music was completely new to me. At one point during the show, there were 9 or 10 people on stage, and that was incredible. Bought the EP on vinyl as soon as I got home.


Least favorite concert?
Josh: My least favorite concert was a show that I was supposed to go to, but wasn’t able to. My buddy and I were going to go see a house show on New Year’s Eve, and this band called Jack Swing was playing, and they’re really cool. But my buddy got really sick beforehand, so I just ended up giving him Pepto Bismol and ginger ale while we watched the lackluster New Year performances on TV.

Favorite thoughts, experiences about Pittsburgh?
Tony: I just recently moved to Pittsburgh for college, although I have been coming here my whole life because this is where my family hails from. I’ve always loved this city because I think it has been through incredible hardship (since the closing of the mills), yet is currently as thriving and full of life as ever. I believe Pittsburgh is a truly blue collar, hard-working city. There’s a lot of pride here and that makes me feel lucky to be a part of it.

Thanks, fellas. I have to say, Josh. I share your enthusiasm for Jim Donovan and his band. Such a great local album from last year.
Posted by Hughshows at 8:46 AM No comments: 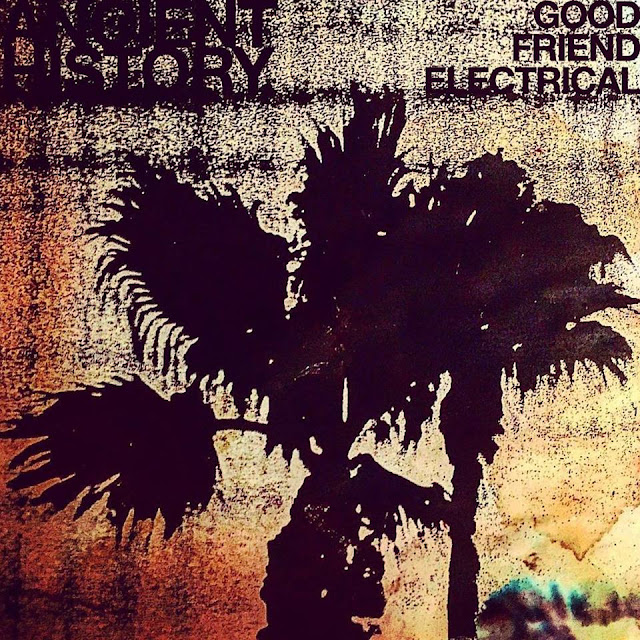 "The story of two old friends fighting in a strip-mall parking lot."

Ancient History is an indie fuzz rock band from Pittsburgh who are dropping their sophomore release entitled Good Friend Electrical on Saturday night with a banging lineup featuring fellow Wild Kindness labelmates at The Funhouse at Mr. Smalls. with the first 150 through the door getting a complimentary copy. Much thanks to Donald Ducote (Guitar/Vocals) for taking the time to participate in this edition of First/Last. 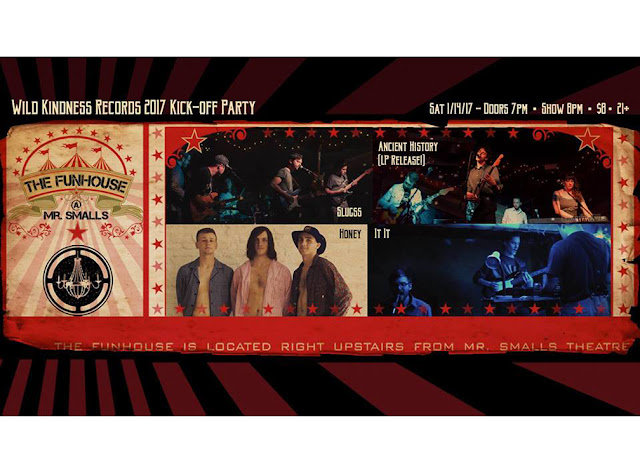 The first album you ever bought?
Aerosmith Get a Grip.

Favorite album of all time?
Neutral Milk Hotel In the Aeroplane Over the Sea.

Least favorite/most disappointing album?
I ditched my high school graduation rehearsal to buy the Green Album by Weezer as soon as the record store doors opened. I waited a long time for that record and it was 25 minutes long and totally lackluster.

Favorite concert ever?
Beta Band/Radiohead (2 weeks after they released Amnesiac) but I've never danced as hard as did during Daft Punk's 2005 Coachella performance.

Favorite thoughts, experiences about Pittsburgh?
The many nights spent drinking in the Allegheny cemetery at 4am with Angry Dan.

Thanks, Donald. Being the GM of Wild Kindness Records, I am betting your last local show was probably yesterday.
Posted by Hughshows at 9:54 AM No comments: