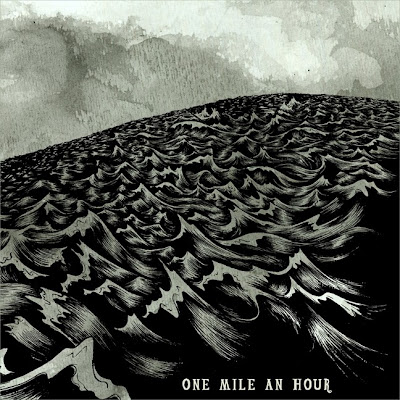 "It's often remarked that we are all products of our environment. So when 3 piece One Mile An Hour began to piece together their debut album, they were only ever going to achieve the result they wanted by constructing their own studio. A space built at the top of a house, overlooking the sea on the south coast of England, became the scene for the recording of this complex, introverted outsider-folk record. "

Check out the band at their official Website, Facebook, Twitter, MySpace, BandCamp and YouTube. The folk rock band hails from London and have just released their fantastic eponymous debut via Snowbird Records. I want to thank songwriter Jeff Kightly for taking the time to participate in this edition of First/Last.

The first album you ever bought?
“'Money and Cigarettes” on cassette (Eric Clapton). It turned out to be a stepping stone back to lots of earlier Clapton stuff (Derek / Blind Faith etc.). Although, I'm not so much of a fan from the mid 70's onwards.


Your last album bought?
Guy Davis featuring Fabrizio Poggi “Juba Dance”. I heard 'Lost again' on Radio 2 whilst driving back home and laughed a lot. Got home, first thing I did was buy the album.


Favorite album of all time?
Obviously everyone would find this a hard task... so I'm gonna’ have to name check a few and then go rogue at the end. John Martyn “Solid Air”, George Harrison “All Things Must Pass”, Keith Jarrett Trio, Grateful Dead, Free, The Black Keys “The Big Come Up”, Bonnie Prince Billy “Greatest Palace Music”, Delaney and Bonnie, Gillian Welch, QOTSA.Jeff Beck “Blow by Blow”, Joe Cocker, CSN (&Y), Johnny Cash, Musica Dispersa, Neil Young, The Pentangle, Paul Simon “Graceland”, Sun Ra, Van Morrison “Astral Weeks”, Wes Montgomery... but here it is. An album that I can go back to over and over again... “Bitches Brew” Miles Davis.


Least favorite/most disappointing album?
Sadly (for me), the later Clapton stuff. Although his vocals on ‘Lonely Stranger’ (the “Unplugged” version) are pretty sweet.


First concert attended?
Huey Lewis at The Brighton Center. 'Hip to Be Square'. What a song!


Last concert?
Devon Sproule at The Hanbury Club Brighton. Somehow she and Paul Curreri made me like reggae!


Favorite concert ever?
Foo Fighters in the Camden Underworld.


Least favorite concert?
I'd have to take the diplomatic rout out of this and would have to say it's probably one of my own.

Any thoughts, experiences about Pittsburgh?
I've never been. Does Google images do it any justice?

Thanks, Jeff. Just love this album, man. And no, Google does not do justice to our city. Come on over and check it out for yourself!
Posted by Hughshows at 7:30 AM

Labels: First/Last, One Mile An Hour