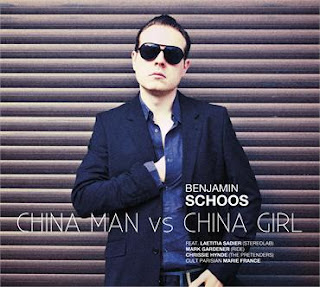 I was surprised how much I got into Benjamin Schoos' latest album, "China Man Versus China Girl". It's not my usual go to listening but cleaning the palette musically once in awhile is always a good thing. Seriously, the majority of it is in French! The lead off single,'Je Ne Vois Que Vous' features a recent First/Last participant in Laetitia Sadier. My thanks to Benjamin for taking the time to answer this edition of First/Last.


The first album you ever bought?
Hum,  it was ' Ca Plane Pour Moi'  of Plastic Bertand, a Belgium French-speaking singer. I was a 4 year old child and I asked to my mum to buy me this single! I was borned electric! I still have this 7-inch in my collection, the older piece I had in my music museum!! And I still love this song by the way. When I was a teenager, the first CD I bought was a RIDE album, the first album. Shoegazing bands simply changed my life!

Your last album bought?
Last album I bought is “Silencio” of Laetitia Sadier. It's an amazing record. The sound is very good and her voice is beautiful and haunted on her new songs. She has something to say!
The songs are very political, against capitalism. I like the way she introduced some political and philosophical ideas in modern pop music. She also did it that in the past, like Marxism theory lyrics on some Stereolab or Monade records.

Favorite album of all time?
Hum, there's a lot of great albums on planet Earth! One of my favorites is “Blue Train” by John Coltrane. The opening theme is splendid. The artcover of the record had a huge impact on me.

First concert attended?
I can't wait to see again François and the Atlas Mountain. This band is really amazing and are great performer. Lyrics and music are so cinematic. I love the way they are  playing with energy and quiet moments. Best band ever! I'm also playing as guitar player for Damo Suzuki, the ex-singer of krautrock band CAN. Such an experience to make improvisation music on stage with him.

Last concert?
It was Goblins, a legendary  Italian prog rock band. They were playing the original soundtrack from the cult movie of Dario Argento’s “Suspiria”. The movie was on a screen and the band played very loud. It was a thrilling experience!

Favorite concert ever?
It was Lee Hazlewood playing with some musicians of The High Llamas. It was amazing. Two years ago. I really loved to see My Bloody Valentine back on stage! Also loved to see Jean Michel Jarre played ‘Oxygene’ with the old analog synthesizers he used in the past. Love synthesizers and ambient music.

Least favorite concert?
Bob Dylan in 2010! He was singing like an old lady and playing some strange chords on the piano. It was so boring! I'm huge fan of Dylan, but this gig was a nightmare!

Any thoughts, experiences about Pittsburgh?
Sorry! As a European I didn't went to Pittsburgh! But I can't wait to come and play, seems to be a great place. I really like listening to The Doors 1970 live in Pittsburgh album.

Merci Beaucoup, Benjamin. I appreciate you taking the time. Your English is very good!
Posted by Hughshows at 7:30 AM