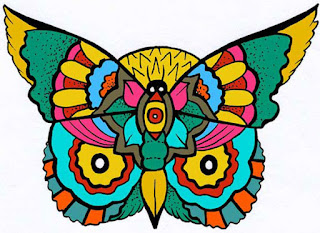 "The GAIA Harmonic project is interactive art show that will take place at Assemble community space for art and technology in October 5 -28th 2012. 2012 is the milestone in an evolutionary process for the planet and us. It is an age of light. The frequencies of the planet are shifting. We can tune in to this frequency through light and sound.These new frequencies can help us understand our multidimensional life on the planet.The Gaia Harmonic Project explores ways people c
an attune themselves simply through awareness and in some way remember their connection to the Earth, each other and all that is."
Friday's opening night features performances by Spirit Child, Smokifantastic and Kellee Maize and the Wumanity Clan. My thanks to Kellee for participating in this edition of First/Last.

The first album you ever bought?
Well, I listened to Joan Jett "I Love Rock and Roll" about 10 times a day when I was under 7, according to my mom but the first album I think I can remember buying was TLC,”Ooooooohhh…On the TLC Tip”.

Your last album bought?
Lupe's newest. I love Lupe cause his lyrics inform and I really appreciate and am inspired by lyrical activists.

Favorite album of all time?
Fugees, “The Score”.

Last concert?
Wiz and Mac's Pittsburgh show. I think they are both super talented and it has been amazing watching them rise. I was super pumped to see all the peace signs Wiz had on stage. Feels like he was on my hippie tip.

Favorite concert ever?
The Roots at the Electric Factory in Philly.

Any thoughts, experiences about Pittsburgh?
Pittsburgh is on some other shit! :) (Excuse my french). The Steelers and Pens are consistently on a roll. We are in the forefront of medical and green technology and underlying it all is a spiritual (includes religious and non-religious Pghers) movement that is known throughout the world.

Thanks, Kellee. I really admire your efforts in the city. You seem to have a little bit of everything going on.
Posted by Hughshows at 7:30 AM