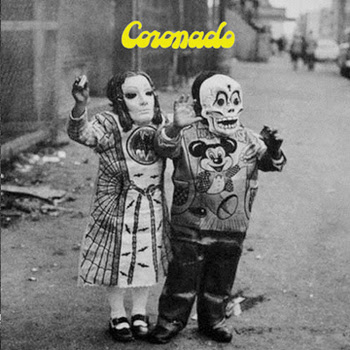 "Coronado was loosely formed at the end of October 2011, and has grown into full time rock band status within the past year.  The band originally consisted of drummer Marc Martinka (former Wino Riot), and guitarist Andy Carlson- a recent transplant to Pittsburgh from Southern California.  The band then added session organist and lyricist Alexander Sands and began working on developing songs in addition to trying out several guitarists and bass players in the process.  They eventually recruited Mt. Lebanon native Brian Swed to play lead guitar, and a guy known within the band as "Rowland"  (Alex Rowland, former Half Nelson) to play bass.  Coronado derives it's name from a Spanish conquistador who wandered the deserts of the Southwestern United States and Mexico in search of a lost city of gold. The songs are reminiscent of a dusty southwest rock/blues sound, partly derived from Andy Carlson's roots in the area. The band began playing shows in the early spring of 2012, and started work on their self-titled debut Coronado in May, 2012."

The Pittsburgh band celebrates it's 1-Year Anniversary tomorrow with a CD Release gig for their fantastic eponymous debut at Club Cafe with local heroes Satin Gum and The Color Fleet tagging along for the party. My thanks to Alexander "The Gentleman" Sands (Vocals/Keyboards) and Marc "Sly Man" Martinka (Vocals/Drums) for taking the time to participate in this edition of First/Last. 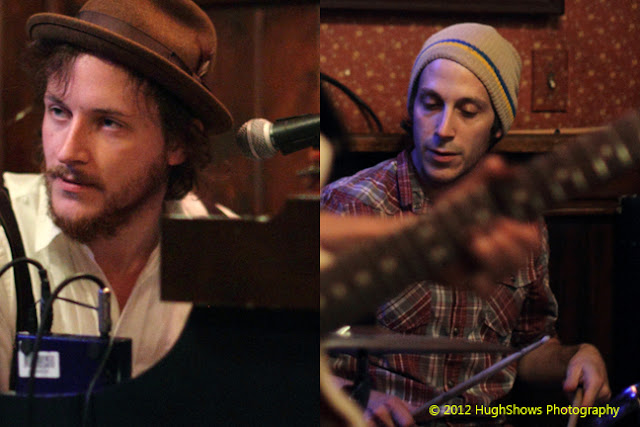 The first album you ever bought?
Alexander Sands: Well, the first album I ever had as a kid was The Beatles’ “Revolver” that I can actually remember really listening to a lot. I used to think that 'Dr. Robert’ was about my dad, because his name is Robert but he is not actually a doctor. He'd also show my brother and I the cartoon movie "The Yellow Submarine" that we rented from this video store called West Coast Video on Murray Avenue. I was probably 5 or 6 years old at the time and The Blue Meanies scared the living shit out of me. We had one of the first CD players back in the 80's, and “Revolver” was on CD. There was also George Harrison’s “Cloud 9”, and some jukebox oldies compilations. I honestly don't remember the first album that I ever bought with my own money, but being that it was the 90's, it was probably Green Day. “Dookie” in 5th grade.
Marc Martinka: I remember it very clearly and it's one of my first memories. I was four years old and my dad took me to the record store and told me I can pick out three albums and I walked out with “London Calling” by The Clash, “The Stray Cats” (Self Titled) and “Face Value” by Phil Collins. Three albums that I'll still listen to, yes even “Face Value”.

Your last album bought?
Alexander: The Harlan Twins, “Old Familiar”.
Marc: I just picked up “Lonerism” from Tame Impala and recommend it to anyone who likes the psychedelic era of The Beatles. Lots of great melodies and atmospheric trippiness all over the place. Also reminds me a bit of Todd Rundgren's early 70's stuff. It's poppy and accessible but really strange at the same time if that makes any sense.

Favorite album of all time?
Alexander: The Pretty Things, “Parachute”. A girl I met on a Long Island bus to Manhattan really got me into this album and I listen to it about once a week in addition to Terry Reid's “Seed of Memory”. Although Badfinger, “No Dice” is making a very strong case!! Haha.
Marc: “The White Album” and “Exile On Main Street”. Can't pick between the two. I have a thing for double albums and tried to convince the guys that our debut album should be a double. They talked me out of it (thankfully) but I'll keep pushing for it as we continue on, haha. But I think both of those albums are just so perfect. “The White Album” had The Beatles stripped back down a bit coming out of “Sgt. Pepper” and “Magical Mystery Tour” so it has a raw edge to it that I love. “Exile” I think is the Stones at their peak. The Country-Blues and Gospel influenced stuff on there seem so effortless and natural. Maybe the best pure rock n roll album ever made in my book.

Least favorite/most disappointing album?
Alexander: Perhaps “Another Side of Bob Dylan”.  I know the whole story behind it and the lyrics are great, but it's pretty awful on the ears.
Marc: “Kisses On The Bottom” from Paul McCartney. I've never even heard the entire album because the title alone makes it the most disappointing album ever made. Don't get me wrong I love Paul, one of my all-time favorite musicians ever but some of the shit that he puts out can be questionable. He's Paul so I guess he can do whatever he wants but I hold him to such a high standard as a fan I selfishly want everything to sound like 1963-1976.

First concert attended?
Alexander: The first concert that I ever attended was The Smashing Pumpkins’ ‘Melancholy and The Infinite Sadness’ Tour. I went with my sister on my birthday and it was the first show after the keyboard player died of a drug overdose and the drummer Jimmy Chamberlain went to jail.  So, there was a replacement drummer. I also remember that they won the MTV Music Video Award for "Tonight, Tonight" just before the show in Pittsburgh. James Iha made reference during the show (at the Civic Arena) that "Jean Claude Mother Fucking Van Damme dropped out of that hole in the ceiling" (referring to the film Sudden Death).
Marc: Lollapalooza '93 at Star Lake. Fishbone was the highlight.

Last concert?
Alexander: Probably every good local Pittsburgh show in the last 3 years. I stopped going to the old folks stuff and "farewell" tours awhile ago. Usually shows that cost under $20,  Haha.
Marc: Dr. Dog at Mr. Small's, one of my favorite current bands.

Favorite concert ever?
Alexander: My favorite local show was The Harlan Twins this past summer at this 4th of July event in the Machine Age parking lot where the Bloomfield Bridge intersects Bigelow. It was beautiful with sparklers and stuff, and I was with the guys from Coronado and I really felt like I was finally a part of something special.
Non-local, it would have to be Bob Dylan at A.J. Palumbo Center in 1999. It's a small basketball gym and it was before he released Love and Theft, so he played only the classic songs and his voice was still really intact. Two years later I tried to meet him at the Rosemont Horizon outside of Chicago and almost froze to death in a snow storm. I was picked up by a hotel shuttle and sat in the lobby of the hotel until guests needed to go to the airport in the morning. Then I took the subway back from the airport and it was probably around 5 AM.
Marc: Pink Floyd '94 at Three Rivers Stadium. Me and a few friends skipped out of school to go and I haven't been the same since. A life changer.

Least favorite concert?
Alexander: The Black Keys at The Metro in Chicago. It was a sold out club show and I was so far in the back that I couldn't see anything and it just sounded like a mass of over-driven fuzz, so I left.
Marc: I remember being at a particularly bad Bob Dylan show but I can't remember what year it was. Thankfully, it was redeemed by two great back to back Dylan shows at the Civic Arena and State College in '99.

Favorite thoughts, experiences about Pittsburgh?
Alexander: There is an old book that has diagrams called "The Family Tree of Rock" or something like that. If somebody were to make one for Pittsburgh, they would see that every band in the last 10 years (and maybe beyond) is inter-connected in some way through its members or experiences. When I was in high school my band played in the backyard of a band mate of Josh Verbanets from Meeting of Important People. Our drummer was J.P. Nelson, the older brother of Kenny Nelson from the band Pet Clinic. After that, we briefly had the bassist that played in Josh's band play in our band. I played briefly for a time with Boxstep, and Lohio.  Josh V. also did some work with Lohio. Members from Lohio played with Small Cities who eventually became The Slow Reel. When I moved back from Chicago in 2007 I had a band called The Airplane Graveyard. The drummer Chris McCune plays in Bear Skull and October, which are heavier bands that have touched many others in those genres all the way out to Beaver county and beyond. He plays with Nate Campisi, who works at Mr. Small's Northside Studio and is now supposedly the bassist of The Harlan Twins. Teal Fitzpatrick from The Slow Reel is now doing some work with Locks and Dams, which has both Nate and Chris. She is also doing some stuff with Molly Alphabet, Chet Vincent's girlfriend. Molly Alphabet has one of the guys from Grand Piano. Molly's band was loosely derived from a band that Chet and I had called "Chester A. Arthur and Friends" which also had members of Chet Vincent and The Big Bend and a guy named Jake Marsico that played bass in a band from my high school whose drummer was David Hidek, an engineer at Treelady Studio. Coronado's drummer Marc Martinka grew up together with Paul Luc, and Jesse from The Delicious Pastries. And so on and so on....it's one endless chain of music and the people that create it. And this doesn't even include other cities as well where Pittsburgh musicians have moved to or played in those cities. Steven Stens used to play in Lohio and Horse or Cycle and now plays with his brother Juston Stens and The Get Real Gang in Philadelphia who used to be in Dr. Dog. In this way, the backyard show from high school is interconnected with Dr. Dog playing a sold out show Mr. Small's. Most people would never realize all of this when just going out to see a show.
Marc: I think Pittsburgh is a fantastic city. People like to rag on it but I think it's the perfect combination of small town/big city. Musically everyone is kind of connected in one way or another like a family tree or that Six Degrees of Kevin Bacon concept. And the last 6 or 7 years the music has been fabulous coming out of here. Now if we could get the rest of the country to notice the wealth of talent here we would be in business as they say.

Thanks, fellas. Fantastic album you guys got there. I LOVE the 'Pittsburgh Family Tree of Rock' concept. I could probably illustrate the majority of it with my photos!
Posted by Hughshows at 7:30 AM

How are we looking at the paintings of Mark Rothko these days?
Is he old hat, replaced in America by more contemporary concerns? Looking at his minimal canvases and their enticing floating squares of subdued paint live at the MOMA recently, I had to stop to wonder whether he still communicates to a modern and younger audience.
Wahooart.com, the site that sells good canvas prints to order from their database of digital images, has many Rothko prints. I ordered this one, Blue and grey, http://EN.WahooArt.com/A55A04/w.nsf/OPRA/BRUE-8BWU7F
, that I have now hanging in my study. I can spend a long time looking at this elusive image that takes me to some other place not in this world.