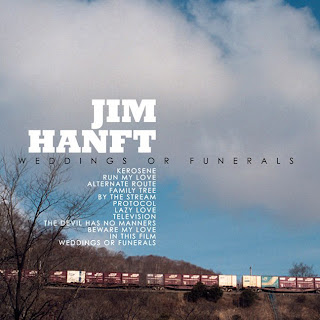 "L.A.-based singer-songwriter Jim Hanft's songs carry both the comfort of familiarity and the excitement of discovery-and they're gaining him a stream of praise from fans, tastemakers and even Hollywood film executives seduced by his honestly told stories of life's quiet moments and turning points, relations and temptations, loves and losses. Accompanied by musical partner Samantha Yonack's pure harmonies, Hanft creates a modern musical landscape rooted in the raw, yet nuanced strength of his words and performance. He is currently on tour supporting his new album, WEDDINGS OR FUNERALS, recorded at Stockholm's Decibel Studios and produced by Lasse Marten (Lykke Li, Shout Out Louds, Peter, Bjorn & John)."

Jim will be in Pittsburgh tomorrow night at Club Cafe opening for Neil Halstead. My thanks to him for taking the time to participate in this edition of First/Last.

The first album you ever bought?
Pearl Jam, “Ten”.

Your last album bought?
The latest Deer Tick album, literally 30 minutes ago at a street fair in Brooklyn before heading to Boston.

Favorite album of all time?
There are about 80 of these...but I'll say Wilco, “Yankee Hotel Foxtrot”. That probably had the biggest impact on me.

Least favorite/most disappointing album?
Any Beach Boys album without Brian Wilson on it.

Favorite concert ever?
Bruce Springsteen at Giants Stadium. I was in the audience with my older brother and friend/songwriter Jake Hill. We all had white undershirts on like the “Darkness On The Edge of Town” album cover and it was the most fun and most rock and roll concert I've ever seen.

Least favorite concert?
John Lennon...because I never got to see it.

Any thoughts, experiences about Pittsburgh?
I grew up in Eastern PA outside Philly, so I'm really just excited to see what the Western side of the Keystone State is like and how the people react to music. I also hear that a place called Dish has really good pasta.

Thanks, Jim. It's funny as I prepare this post, the Steelers-Eagles game has just started. Will be interesting to see how the game turns out and if you mention it tomorrow.
Posted by Hughshows at 7:30 AM