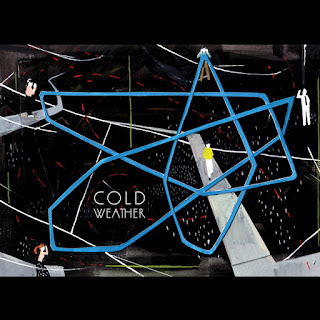 "Cold Weather is a chamber pop/indie-folk band based in Pittsburgh, PA. The trio consists of multi-instrumentalist/vocalist Mark Ramsey, bassist Sarah Lacy, and drummer Alex Platz. The band’s first recording, Functional (4-song EP), was released in June, 2012. It was recorded with Jake Hanner in early 2012 and features cover art by acclaimed illustrator Jon Han. The EP’s second track “Let It Darken Down” will appear in the independent film “Redlands” (currently in production). The band is working on a full-length album tentatively scheduled for release in early 2013."

Fairly new to the Pittsburgh scene, the band is playing Brillobox this upcoming Friday on a bill with Household Stories supporting Goldenboy. I highly recommend checking out their debut EP "Functional" and want to extend my thanks to the trio for participating in this edition of First/Last.


The first album you ever bought?
Mark Ramsey: Tears for Fears, “Songs from the Big Chair”.
Sarah Lacy: The Beatles, “1967–1970 (The Blue Album)”. My Dad had a lot to do with my early musical taste. I got a little off track when left entirely to my own devices as a tween. I spent hours making up dance routines to Janet Jackson’s “Rhythm Nation 1814” and there was definitely some Milli Vanilli mixed in.
Alex Platz: Probably something embarrassing, Destiny's Child comes to mind...

Your last album bought?
Mark: Perfume Genius, “Put Your Back N 2 It”.
Sarah: Youth Lagoon, “The Year of Hibernation”.
Alex: I think it was a Phantogram EP.

Favorite album of all time?
Mark: John Coltrane, “A Love Supreme”.
Sarah: I can’t pick a favorite of all time, but some of the most influential were Versus’ “Dead Leaves”, The Magnetic Fields’ “Distant Plastic Trees” and Rachel’s “Handwriting”, all of which I got around my junior year in high school. Those albums marked a departure from what I had been listening to up until then (jam bands and bluegrass). They led me to change course and broaden my musical taste.
Alex: There's a bunch, but Daft Punk's “Discovery” has a special place for me.

Least favorite/most disappointing album?
Mark: Band of Horses’ “Infinite Arms” (For me, it’s all been downhill since “Everything All the Time”).
Sarah: I don’t have a least favorite, but I remember being pretty disappointed with U2’s “Achtung Baby” when it came out. I didn’t like it from an aesthetic point of view either. There are a couple songs on that album I liked, but overall I was just confused by it.
Alex:I had big expectations for Justice's most recent album and was definitely underwhelmed after listening through it.

First concert attended?
Mark: October 6, 1987, U2 ‘Joshua Tree’ tour at Cleveland Municipal Stadium. I still have the ticket stub. Little Steven and Los Lobos opened. That also marks the date of my first contact high.
Sarah: I saw Wilco on their ‘A.M.’ tour open for The Jawhawks at Ziggy’s in Winston-Salem in 1995. It was an incredible show. Although at the time, I was still mourning the loss of Uncle Tupelo.
Alex: Dave Matthews Band.

Last concert?
Mark: Sarah & I both saw Meeting of Important People at Mr. Smalls.
Sarah: Before that we saw Sigur Ros in Toronto.
Alex: Last concert was Beat Connection at Brillobox.

Favorite concert ever?
Mark: Simple Machines’ ‘Working Holiday Party’ in DC, January ‘94. 18 bands played. It was the first time I heard Archers of Loaf & Rodan and they both blew my mind. I also have to say that every Fugazi concert I saw was incredible.
Sarah: I can’t pick a favorite concert ever, but my favorite show thus far in Pittsburgh was Future Islands at the Brillobox. It was such an intense and intimate show.
Alex: Hmmm…I haven't seen as much live music as I would like, but I was absolutely blown away by this group Netherfriends when I saw them at Howler's last year.

Least favorite concert?
Mark: Sonic Youth performing “Daydream Nation” in 2007. I’ve seen Sonic Youth many times over the years and they were always great, but this performance was flat & uninspired. I’m not a big fan of the recreating a classic album live thing.
Sarah: I saw The Magnetic Fields at Old Town School of Folk Music in Chicago in 2004. Andrew Bird was the opener. He impressed me, but it was an off day for The Magnetic Fields. I think it was a matinee show, which may have thrown them off their game. I don’t know which came first, but there was a weird vibe in the crowd and on stage. It wasn’t horrible, but it was a letdown because I was really looking forward to it. I know I’ve suffered through way worse, but I tend to forget about those shows.
Alex: Bone Thugs-N-Harmony. They looked completely uninterested during the show and used pre-recorded verses the entire set.

Favorite thoughts, experiences about Pittsburgh?
Mark: I want to use this opportunity to recommend Jake Hanner to any local bands that are thinking about recording. I think he’s the best engineer/producer in the area, his rates are cheap and he’s really fun to work with.
Sarah: I’ve lived here 4 years, and it just keeps getting better. It is such an approachable, supportive, close-knit community. There are so many opportunities here. I’m also obsessed with the geography of Pittsburgh.
Alex: Longtime resident and still a big fan of the city and the people who live here. A small gripe is that the last two concerts I wanted to go to were cancelled because they weren't able to sell enough tickets. A lot of the bands I would like to see seem to skip over Pittsburgh for that reason, so I guess I would ask all passionate music listeners in Pittsburgh to get out there and see more live shows!

Thanks a lot guys. I'll second the love for my man Jake Hanner. Not only is the guy crazy talented but more importantly, he's the nicest dude you would ever want to know.
Posted by Hughshows at 7:30 AM