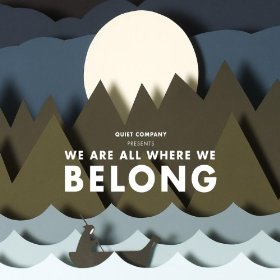 "In 2011 Quiet Company spent the majority of their time writing & recording their most ambitious & thought provoking album to date, "We Are All Where We Belong." In late summer they were approached by Grooveshark & signed to their new Artist Development program. Since July 1st, Quiet Company has garnered  a global audience, thanks to their partnership with Grooveshark. Quiet Company's Facebook fans jumped from 2,800 in July to over 50,000 by February & their video for "Fear & Fallacy, Sitting in a Tree" reached over 100,000 plays in under 3 months. Quiet Company is averaging well over 50,000 song plays a day on Grooveshark alone all across the globe.
In October, Quiet Company released their new album, "We Are All Where We Belong" which received the best reviews & response the band has earned to date. They were invited to play Deluna Fest in Florida as well as CMJ in New York."

So here's the deal, I am constantly exposed to music...constantly. Most of it I like, some of it I don't. But there are a few times that I discover an album that absolutely floors me. Case in point, "We Are All Where We Belong" by Quiet Company. Everything about it, most notably, the amazing lyrics, have struck a chord with me and I am so geeked that the band will be playing Pittsburgh tomorrow night at the Moose on a bill with Brick + Mortar for the EARLY show. My sincere thanks to songwriter Taylor Muse (Vocals/Guitar/Piano) for taking the time to participate in this edition of First/Last.

The first album you ever bought?
Probably something obscure and Christian. I want to say "Scarecrow Messiah" by Bride, but it might have been "Snakes in the Playground" by Bride. I'm pretty sure it was something by Bride.

Your last album bought?
"Moms" by Menomena. It's very good, as is everything that Menomena has done.

Favorite album of all time?
For my money, "OK Computer" by Radiohead is the closest thing to perfection anyone has achieved in the history of recorded music.

Least favorite/most disappointing album?
Zwan, and then everything Billy Corgan has done afterward.

First concert attended?
Newsboys, probably. They were/are a contemporary Christian band that was always coming through east Texas and playing churches or whatever the biggest venue in the area was. I saw them at Longview High School's coliseum, and they had a ton of lasers and a lift for the drummer that hung him upside down over the crowd while he played a solo. Looking back, their music was pretty cheesy and preachy but the live show was undeniably insane.

Last concert?
Saw Menomena at the Parish in Austin last Wednesday. A week or so before, my wife and I saw Ben Folds Five at Stubb's.

Favorite concert ever?
Radiohead in Houston, TX. ‘Amnesiac’ tour. Their song selection was damn near perfect and covered all of their albums not just the most recent. On the four hour drive home, my friends and I talked ceaselessly about all the things that would be cool about naming your child "Skeletor".

Any thoughts, experiences about Pittsburgh?
We've played their once before but no one was there and it was several years ago, but we did have one amazing experience in the Primanti Bros. sandwiches.

Thanks, Taylor. Can't tell you how much I love this album. Really looking forward to the gig.
Posted by Hughshows at 7:30 AM