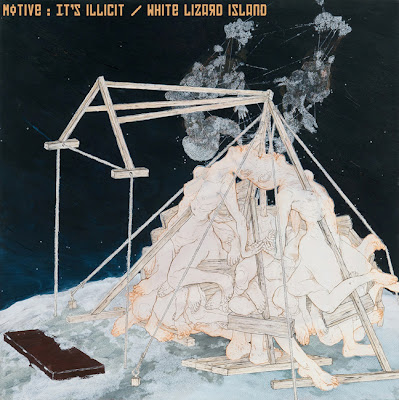 "Not long ago, the members of Motive were shredding through jazz lead sheets and getting carted across the U.S. and Europe to showcase their young talent. Nowadays, Motive populates a different scene. These Seattle transplants, turned Brooklynites, emerged from a Clinton Hill, Brooklyn practice space onto stages around the city and are rapidly taking NYC – and the internet – by storm. Known for their grunge influenced indie rock sound, Motive’s catchy, hook laced songwriting shines through on the latest single, “What’s So Bad?”, which was Produced & Mixed by Chuck Brody (Phantogram, Bear Hands, Ra Ra Riot). The videos for “What’s So Bad?” and "It's Illicit" recently caught the attention of MTV and both premiered on MTV2’s 120 Minutes with Matt Pinfield. The videos quickly skyrocketed to #2 and #12 on MTV.com’s Most Popular video chart, topping artists such as Nicki Minaj, Justin Bieber, and Imagine Dragons- a rare feat for an unsigned band."

Check out the band at their official Website, Facebook, Twitter, and BandCamp. They play the Moose tonight touring behind their latest EP, "It's Illicit". Also on the bill are Can't Dance and Jacob Klein. My thanks to Nick Wold (Guitar/Vocals) for taking the time to participate in this edition of First/Last.


Your last album bought?
I honestly can't remember the last album I bought, I'm a pirate (yes, you can download our music for free if you want). I used to buy used vinyls all the time, Bob Marley's “African Herbsman”.


First concert attended?
The first concert I ever attended was 'Deck the Hall Ball' in Seattle when I was 12. Hole was the headliner, Garbage played as well. Early in the night was a solo artist I hadn't heard of (it was Elliot Smith). I remember some people booed him, but he left a huge impression on me and others there.


Last concert?
The last concert I saw was Exit Music a few days ago at Glasslands in Brooklyn. It was a benefit concert for Ben Curtis from School of Seven Bells, they were really great.


Any thoughts, experiences about Pittsburgh?
I've only been to Pittsburgh twice now, but I've already had some great times with wonderful people (shout out). Seems like a city that knows how to have genuine good times and appreciates good rock. Also, you can smoke in bars.

Thanks, Nick. Wow, booing Elliott Smith? People are idiots!
Posted by Hughshows at 6:25 AM