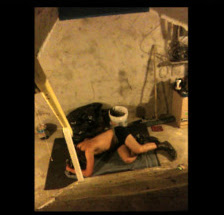 "BLUE X BAXTER has readily found out there are other ways to somewhere. There is nothing really needed when its around, and then, there’s nothing really hidden about art. When I was 10 I was a myth. At 11 he was a bandit. In late 2012, he started writing in the 3rd person again, as he'd been developing a yogic model to separate a flicker/flood of consciousness of himself from himself. The public has yet to know if it was a success- and to what terms. Why you'd need to know is all right."

Check out the band's official Website, Facebook and BandCamp. Have you been longing for 'bluesy, pirate folk music' in Pittsburgh (seriously, who among us hasn't been)? Look no further than BLUE X BAXTER and experience for yourself the enigma this Saturday at Biddle's Escape. I want to thank him for taking a few minutes to participate in this edition of First/Last.

The first album you ever bought?
First album is easy.


Last concert?
The last concert I went to was Coronado, and then Delaware.


Favorite concert ever?
Best was the one with out lights.


Least favorite concert?
Worst is the one you miss.

Thank, man. Love your answers.
Posted by Hughshows at 3:30 PM