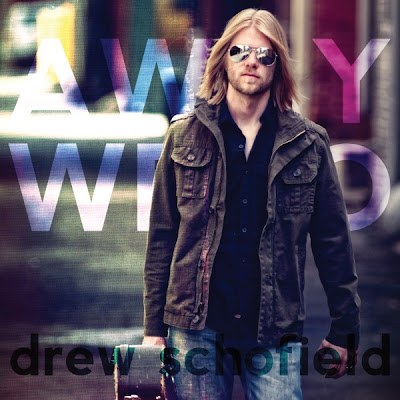 "Drew Schofield was surrounded by music from his very beginnings. Born to a singer/songwriter mother and a church-going, hymn-singing father, Drew developed a love for music from his earliest years. His first instrument was drums, and he became passionate about percussion and the rhythmic elements of guitar early on. Drew briefly pursued an undergraduate degree in percussion, and the exposure to jazz in college sparked an interest in a broader spectrum of musical influences. He began writing original music during his college years and performed with friends in casual settings as he began to fashion his songwriting skills. The years since those early days have brought a maturity to Drew's songs, and "Away We Go," his first full-length studio album, is a testimony to his sharpened skill as a singer/songwriter. The tunes are an acoustic-driven mix of folk rock with a pop sensibility that drive Drew's melodic hooks to the forefront of the listener's attention. Soon after Away We Go was released, Drew was hand selected by Grammy Award winning producer John Shanks as a top 10 finalist out of 12,000+ entrants in Guitar Center's Singer Songwriter 2 nation-wide competition. The competition brought national attention to Drew's music, and the future looks ever brighter for the young artist."

Check Drew out at his official Website, Facebook, Twitter and YouTube. His latest album, "Away We Go", is currently available as a limited edition and he stops by the burgeoning Center of Harmony Saturday night for a gig.
As a special thank you to the readers of this blog, the first 20 people who attend the show Saturday and mention 'HughShows' at the door will get free admission to the concert! You heard that right, arrive early and enjoy a free gig from an up and coming artist.
I want to thank Drew for taking a few minutes to participate in this edition of First/Last.

The first album you ever bought?
The first CD I ever bought would probably be DC Talk’s “Free at Last” when I was 12. I grew up surrounded by a lot of people who thought that rock music was evil! Thankfully, my parents were not of that mindset. This album was my first step toward exploring popular music while remaining safely in the religious music vein. I got hooked on the BEAT! It lit a fire inside of me and I found myself in drum lessons within a year of buying that album. That was the beginning of my musical journey…


Your last album bought?
“Everything Everytime Everywhere” by Trevor Hall. I really dig his sound! Big Reggae influence, but not over the top. Very hooky choruses and licks.


Favorite album of all time?
Dave Matthews Band’s “Under the Table and Dreaming.” I was a freshman in college and really exploring new music after having been pretty sheltered in regards to music most of my life! That album really impacted me, with Dave’s insane creativity and song structuring. I kind of feel like Dave Matthews taught me how to play guitar, learning songs like ‘Ants Marching’, ‘Satellite’, and ‘What Would You Say’.


Least favorite/most disappointing album?
“Before These Crowded Streets” by DMB. I had high hopes after “Under the Table” and “Crash”, but this album was like lukewarm tap water to me. I never learned a single song from the album, which was weird for me.


First concert attended?
My mom was a singer songwriter, so I was always in tow to one of her events, whether at churches or nursing homes, or whatever she got into her head. She even made me sing on her album! I guess that was my first recording experience. I did the part in one take and my mom wouldn’t leave me alone about it for the next 10 years! Every new girlfriend I had, my mom would find a way to play the recording for her. I was not a fan!


Last concert?
Diane Birch at the Bluebird Theater in Denver. She was solid! She has such depth to her sound and lyrics. It was a great show, too, with Andrew Belle and Megan Burtt opening up the night.


Favorite concert ever?
I got to go see John Butler Trio at Red Rocks. That was a blast! Trevor Hall opened and I actually enjoyed him more than JBT. Butler was incredible, though. Such an outstanding talent.


Least favorite concert?
I honestly can’t give a good answer to that one. I always find a way to enjoy every show. Haven’t had any real disappointing shows. But then again, I don’t go to a ton of them and I usually do my research and know the artist is going to be worth it!


Any thoughts, experiences about Pittsburgh?
I’ve only been once, but the trip was memorable. My wife and I were on tour with a group from my college and it was our 1st wedding anniversary. We stayed at a beautiful Victorian style bed and breakfast (wish I could remember the name) and ate dinner at a delicious Thai place just a few steps away. We also checked out the zoo and have some memorable photos from that trip. I thought Pittsburgh was a gorgeous city. Trees everywhere!

Thanks, Drew. It's funny, living here you don't necessarily think of Pittsburgh and trees until you travel and kind of miss them.
Posted by Hughshows at 5:41 AM