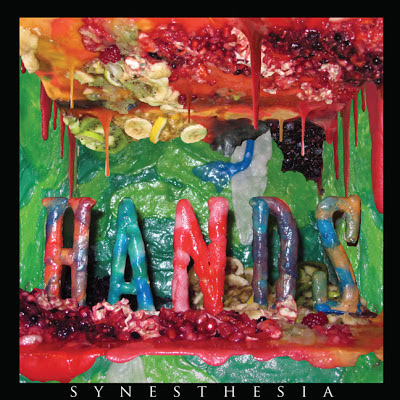 "Hands can be so many things: welcoming, scolding, loving, clenched into a fist. With Hands as your name, you have to both capture emotion and prove that the music you create with your own is worthy of the moniker. Luckily these Hands are up to the challenge.


Hands makes music like a rip tide, swirling in overlapping loops and riffs, slowly enveloping you. The group’s members – Geoff Halliday, Ryan Sweeney, Sean Hess and Alex Staniloff – craft their hypnotic sound from a single dropping note that builds into a reverberating roar that crashes over you like a wave. It’s a mesmerizing trick that they pull off on their debut LP, Synesthesia. Building off the success of their Massive Context EP (Small Plates) released in 2012 and a 7” to be released on White Iris in January, songs like “Videolove” and “Trouble” show Hands’ innate ability to blend instruments and electronics into a deep texture that moves ethereally through genres. Hands moves from rock to synth-pop to skyrocketing stadium anthem, often within the same song. The interplay of Sweeney’s esoteric guitar riffs, Hess’ technical tempos, Staniloff’s thumping bass and Halliday’s soaring vocals and affected keyboards help Hands build a dynamic atmosphere, where a lesser band would only manage empty atmospherics."

Check out the band at their official Website, Facebook, Twitter and BandCamp. They stop in Pittsburgh tomorrow night at 6119 touring behind their latest album, "Synesthesia", via Kill Rock Stars. Local faves Delicious Pastries and Neighbours also join the bill. My thanks to Geoffrey Halliday (Keys/Vocals) for taking the time to participate in this edition of First/Last.

The first album you ever bought?
The Cranberries, “No Need to Argue”.


Favorite album of all time?
Changes a lot but right now it's "Fear of Music" by Talking Heads.


Last concert?
Half Moon Run at Bootleg Theater in LA.


Favorite concert ever?
Fugazi for sure.


Least favorite concert?
Black Moth Super Rainbow were maybe the most boring show I have ever been to.


Any thoughts, experiences about Pittsburgh?
I love the Primanti Bros. sandwiches more than my own family.


Thanks, Geoffrey. Damn, you must not like your family too much ;)

Posted by Hughshows at 5:59 AM