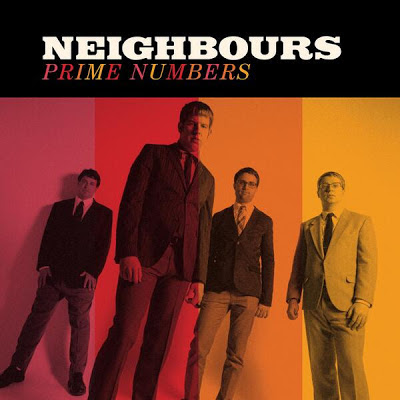 "None of the members of Neighbours has a synth-pop side project. You can’t really define the band’s music as a subgenre or a this-wave or that-core. The four-piece from Pittsburgh basically just plays rock ‘n’ roll. That’s not to say they’re scornful of new music. The band just draws influences from further back: Motown soul. The Beach Boys. Elvis Costello. The Jam. The threads that tie it all together: Melody and respect for the form of a good pop song. The members come from different musical backgrounds, some having gone to college together early last decade, others joining the fray more recently. The band played its first show in July 2010 and quickly became a go-to band at venues around town, playing several sold-out rooms and opening for national acts like Mike Watt."

Check out the band at their official Website, Facebook, BandCamp, SoundCloud, YouTube, Instagram and Twitter. Their debut full-length, "Prime Numbers", is available this week and I really want to thank Michael Cunningham (Keyboards/Vocals), Ross Reilly (Guitar/Vocals), Joe Tarowsky (Bass/Vocals) and Andy Mulkerin (Drums) for taking a few minutes to participate in this edition of First/Last. 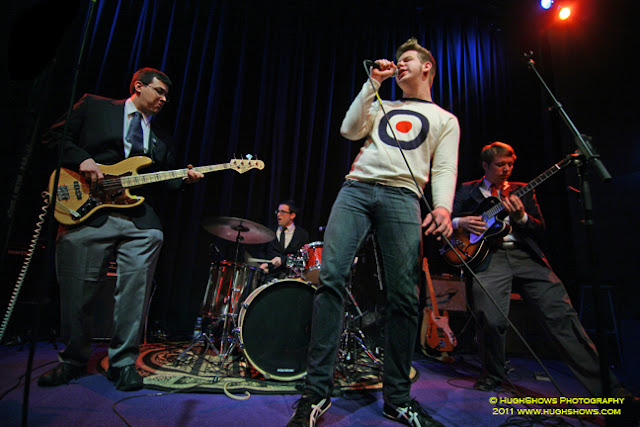 The first album you ever bought?
Michael Cunningham: Prince, "Around the World in a Day".
Ross Reilly: I'm having a tough time remembering the first album I bought...but the first album I remember being given was Beach Boys Concert. I got it for Christmas, and I remember arguing with my parents whether Brian Wilson was wearing a huge dangly earring on the cover (he wasn't-it was a boom mic stand). The first thing I actually bought might have been Def Leppard's “High 'n' Dry”, maybe?
Joe Tarowsky: With my own money, The Beatles "Rubber Soul" on CD.
Andy Mulkerin: I remember having cassingles of a few things -- a Roxette song, I think, and a couple Nirvana singles -- but for whatever reason, I remember the first album I bought on CD for myself being John Mellencamp's “Human Wheels”. What a bad album.


Your last album bought?
Michael: Ahmad Jamal, "Ahmad Jamal at the Top: Poinciana Revisited" and Belle & Sebastian, "The Boy with the Arab Strap" on the same trip to the store.
Ross: The Impressions' "One By One".
Joe: I was just at Jerry's Vinylpalooza last weekend, so I came away with plenty of good ones - two great sounding Dave Brubeck collections, to name a couple.
Andy: I end up getting a lot of albums for free because of my job writing about music...in terms of albums *bought*, I just dropped cash on the new Austra album, “Olympia”, which I'm pumped on.


Favorite album of all time?
Michael: The Who, "The Who Sell Out".
Ross: Oh sheesh, I can't pick just one. Something by The Beach Boys, Scott Walker, Free Design, or from the Tropicalia movement.
Joe: Depends on the day, hour, barometric pressure. At the moment, Queen "Queen II."
Andy: Oooh, this changes regularly but I'll say Van Morrison's :”Astral Weeks” right now.


Least favorite/most disappointing album?
Michael: The first time I heard "The New Danger" by Mos Def, I was done with him. Just done. And he had been one of my favorite artists to that point. I remember thinking, "Clearly, you need to stick with acting and give up on music, if this is the type of palaver you're going to put out there on your records."
Ross: Most disappointing is everything Super Furry Animals have put out since “Rings Around the World”. Their first five albums are untouchable, and then they just hit this wall. Every time they put a new one out, I cross my fingers and hope they'll get it back, but they haven't yet.
Joe: Don't know that I have one. If an album is in my collection, there is always something about it I enjoy and can return to at some point, even if I find other parts of it boring or uninspired.
Andy: Of ALL TIME? There are so many bad albums out there, and I hear so many, it's hard to pick one! I might say that I was really disappointed by the Retribution Gospel Choir album that was released a few years ago, not because it's an irredeemably bad record but because it has two songs that are absolute gems, then a bunch of stuff that's forgettable and a couple tracks that are downright bad. And because it's the best-sounding album I heard that year -- the best production. Seeing the potential for that band -- and I respect Alan Sparhawk and think he's great -- then hearing what most of the tracks sound like is pretty disappointing.


First concert attended?
Michael: Weezer with that dog. As openers, September 17, 1994, Aiken Technical College gymnasium.
Ross: The Spin Doctors // Gin Blossoms // Cracker, summer of 1994.
Joe: My mom took me to a "Music of The Mamas and The Papas" show at the Capitol Music Hall in Wheeling, WV when I was around 8 or 9 years old. If I remember correctly, it was John Phillips and other performers of the era doing the M&P's music, as well as other '60s songs.
Andy: Bo Diddley at the rib cook-off at South Park when I was four or five.


Last concert?
Michael: The last concert I attended and did not also play was The Breeders at Mr. Smalls, May 3 of this year.
Ross: Sleep Experiments at the Three Rivers Arts Festival.
Joe: The last big one was with my bandmate Michael, seeing (two of) The Who at Consol.
Andy: Last concert as of right now: Mount Moriah at Club Cafe -- beautiful country-rock from North Carolina on Merge, folks I've known forever.


Favorite concert ever?
Michael: Peaches, Electrocute, and Gil Mantera's Party Dream at the Andy Warhol Museum, October 10, 2003.
Ross: Some of my fondest concert memories are from the three Yo La Tengo Hanukkah shows I've been to. They've given me an excuse to hang out with a good friend of mine in NYC, hear YLT play deep cuts and weird covers, and see some big name acts open up for them.  I even got to play aux percussion on stage last year, which was a nice way to end the year.
Joe: Hard to say. I was lucky enough to see The Who with John Entwistle, and both times were phenomenal. I also hold every Mike Watt show I've seen in very high regard.
Andy: Seeing Q and Not U in a basement in Oakland in 2002 was pretty incredible for me. Another game-changer was Rhys Chatham, Jonathan Kane and Tony Conrad at the Warhol in 2006 or so.


Least favorite concert?
Michael: Slick Rick, Doug E. Fresh and Chubb Rock at the Homewood Coliseum, November 19, 2010. Doug E. Fresh was the only artist who didn't completely mail it in. It was extremely disappointing, considering Slick Rick's reputation as a live performer.
Ross: I saw The Strokes open up for GBV before they had any proper releases. Julian Casablancas got so pissy that people weren't giving their undivided attention to an unheard-of opening band that he grabbed a beer from GBV's cooler, took a swig, and spit it all over the person nearest the stage, who happened to be me. That wasn't very nice, Julian.
Joe: In terms of big shows, The Police when they played out at Burgettstown. It wasn't even bad, but was just really uninspired and phoned-in. I would have had a better time sitting at home playing the records or watching original clips on YouTube or something.
Andy: The Black Crowes and the Levon Helm Band at the Trib Amphitheater in 2009. I loved the Black Crowes growing up, and I like their studio output to this day, but the 10-minute guitar solo, jam-band stuff is totally not my bag. Levon Helm Band was decent but poor Levon (R.I.P.) was sidelined with laryngitis, so he couldn't sing. The highlight was a version of "The Weight" they did with Chris Robinson singing -- I guess I'm glad I caught that, but the Crowes' set was insufferable (as was the crowd).


Favorite thoughts, experiences about Pittsburgh?
Michael: A Steelers game at Heinz Field on a sunny day in mid-October, when the shadows on the field are extra-long.
Ross: One of my favorite Pittsburgh experiences was during college finals in my second year of living in Pittsburgh. I was freaking out, and my (new at the time) friend Pam said, "Stop stressing. I'm coming to get you." She took me to the Virgin Mary shrine in Oakland and Mt.
Washington (which was my first time at either), and then to Eat 'n Park to just relax, talk, and eat. The whole night really encapsulated the weirdness and beauty of the city, and the kindness of its residents.
Joe: Sounds like a cop-out, but too many to count. I'll just say that I've lived closer to the city, and I've lived way on the outskirts. Now that I'm back in the city limits, I realize just how much there is to do, how many great people there are, and how I wouldn't give it up for anything.
Andy: The thing I like best about Pittsburgh as far as music goes is, I think, the fact that no matter what "scene" you look at, everyone's very concerned about helping one another: promoting one another's work, being friends with one another, doing benefit shows when someone's in need. It's not a cutthroat thing where there's a lot of competition between bands; there are cliques, sure, and people from disparate ends of the scene don't always see eye-to-eye, but usually on a human level people get along really well.

Thanks, fellas. I have been wanting you all on the blog for a while now. Looking forward to hearing the new sounds, dudes.
Posted by Hughshows at 6:38 AM