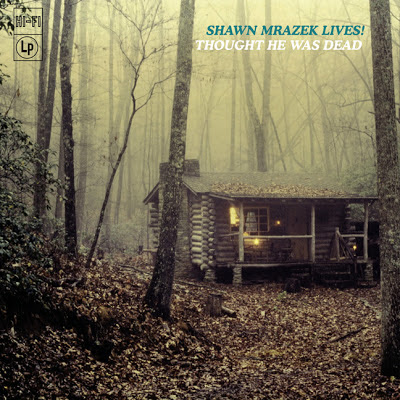 "Shawn Mrazek releases his highly anticipated debut studio album Thought He Was Dead. Mrazek steps out from behind his drums to perform as a multi-instrumentalist, singer-songwriter. Thought He Was Dead is an eight-song masterpiece of the heart that sparkles, snarls and chimes, a powerful record celebrating the gold sounds of Lou Reed and the earnestness of The Modern Lovers. It is a punk-tinged indie rock collection of tunes that become something more than just music - they become your friend. Songs of exodus, self-discovery, joy, and freedom!
Recorded by Hayz Fisher of The New Values, Thought He Was Dead also includes contributions from many noteworthy Vancouverites: Adrian Teacher of Apollo Ghosts, Stephen Hamm of the legendary punk band Slow, Chris-a-riffic of They Shoot Horses, Don't They? and JP Carter of Destroyer."

Check Shawn at his official Website, Facebook, BandCamp, Twitter, and Vimeo. His first solo album, "Thought He Was Dead", is released today and I really want to thank Shawn for taking some time to participate in this edition of First/Last.

The first album you ever bought?
Michael Jackson "Thriller". I was 8 years old. I saved up all of my money and went to Sam the Record Man. I came home with “Thriller” and put it on. While listening to ‘Billie Jean’, I asked my Dad if I could get a leather getup like Michael's. He said that I would have to butter my legs in order to put the pants on. I started crying.

Your last album bought?
Naomi Shelton & The Gospel Queens "What Have You Done MyBrother?" Her video rules!!

Favorite album of all time?
Johnny Cash & June Carter "Duets". Incredible. Listened to it so many times we named our daughter June!

Most disappointing album?
Lou Reed's "Set The Twilight Reeling" was disappointing initially. I wanted it to be different from what it was. Years later, I tried it again and things changed. I heard Lou's lyric "a new self is born, the other self dead. I accept the new found man and set the twilight reeling" and it hit me hard!! Love it.

Least favorite concert?
Elvis Costello. I love him but his show was weird and all ballady.

Any thoughts, experiences about Pittsburgh?
Years ago, I played the Star Lake Amphitheatre (First Niagara Pavilion) and later on that night we all went to this fair happening in Pittsburgh. I loved it!! Pittsburgh rules.

Thanks, Shawn. Would love a Pittsburgh stop if you tour for the album.
Posted by Hughshows at 5:59 AM