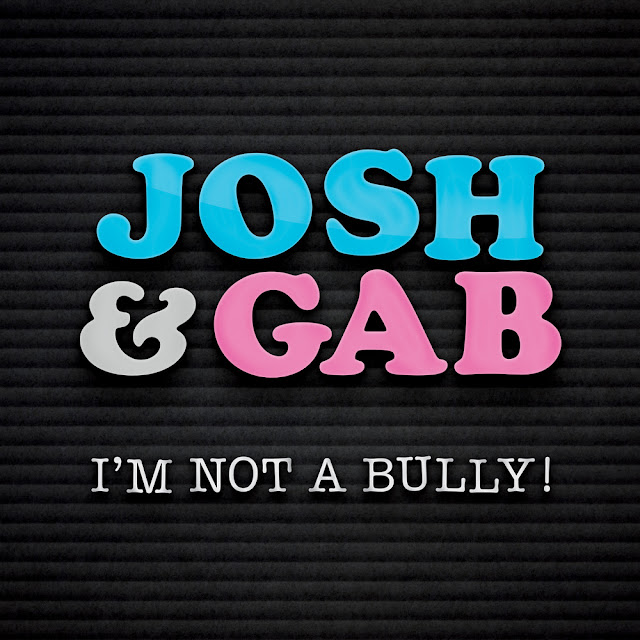 "Josh Verbanets and Gab Bonesso are two Pittsburgh-based writers, performers, educators, and public personalities. Their works have entertained and informed audiences of all ages on both a regional and national scale; together, Josh and Gab have teamed up to develop a unique and unforgettable musical bullying awareness program.


The Josh and Gab Show spotlights the team's unique humor, various styles of songwriting and popular music, and personal experiences in an educational and heartfelt program aimed at students in both primary and secondary schools. The duo has performed their groundbreaking anti-bullying shows at over 75 schools, camps, and community venues, including Western Pennsylvania's Montour School District, Carnegie Mellon University's Waffle Shop, and the Pittsburgh International Childrens Festival, and have now directly engaged over 12,000 youth and educators."

Check out the duo at their official Website, Facebook, Twitter and iTunes. They are celebrating the release of their awesome new CD, "I'm Not a Bully!" this Saturday at appropriately enough the Children's Museum with shows at 1, 2 and 3 p.m. I have to personally let them know what a amazing thing I think they are doing by spreading this important message in a fun and rocking way! As a father of a couple preteens, I already see the importance of this particular issue first-hand. My sincere thanks to both Josh and Gab for taking a few minutes to participate in this edition of First/Last.

The first album you ever bought?
Josh Verbanets: Aerosmith's "Get A Grip" purchased with allowance money.
Gab Bonesso: I honestly can't remember. I was the youngest of five children and my folks were both self-proclaimed beatniks so I was given so much music throughout my life that I don't remember going out and purchasing that very first album. If I had to guess then I would imagine it was some sort of Broadway soundtrack like “Chess” or “Cabaret” or “Chicago”. I was REALLY into show-tunes as a kid.

Your last album bought?
Josh: The Wreckids new release, which is absolutely fantastic.
Gab: Justin Timberlake, “20/20 Experience”. I bought it on iTunes. I hope that still counts.

Favorite album of all time?
Josh: "Love It To Death" by The Alice Cooper Group.
Gab: 3-way tie between “Jesus Christ Superstar” Soundtrack, “In the Aeroplane Over the Sea” and Benny Goodman's “Sing, Sing, Sing”.

Least favorite/most disappointing album?
Josh: The I threw "Wish You Were Here" by Pink Floyd the f*ck out of my car window.
Gab: Eminem, “Relapse”. I never pegged Eminem as a quitter...I kid. Or do I?

Last concert?
Josh: The Andre Costello and the Cool Minors the other night, one of the best local groups I’ve seen in a long time. A perfect three-piece, and Andre’s impeccable vocals.
Gab: Jeff Mangum at the Carnegie Library Music Hall in Oakland.

Favorite concert ever?
Josh: The Saw The Vines at a little club in Buffalo New York in 2002 when their first record was big. The only concert I have ever seen where I didn't want it to end when it did.
Gab: Cat Power at Hartwood Acres. It was one of the first tours where she was able to make it through an entire performance. In fact, she was so comfortable she broke the fourth wall and actually came out into the audience to dance with the crowd. It was amazing. Although, seeing N'SYNC at the brand new Heinz Stadium was pretty rad too. I danced like a fool at that show!

Least favorite concert?
Josh: Iron and Wine at the Palace Theater in Greensburg a few years back.
Gab: Gomez at Mr. Smalls. The experience was so awful that I never listened to Gomez again. And honestly, at the time, they were one of my favorite bands.

Favorite thoughts, experiences about Pittsburgh?
Josh: The My friend Matt Miller claims to know every street in this town.
Gab: I adore Pittsburgh. It's my hometown. I was lucky to grow-up very close to Star Lake Amphitheater which I believe is called First Niagara now. Anyway, as a kid I saw DMB, Barenaked Ladies, O-Town there. As a student at Duquesne University, I had the opportunity to see/meet both David Gray and John Mayer (thanks to my sister Rose). I've seen Patti Smith, The Decemberists, Coldplay, Neil Young also ALL in Pittsburgh. My dream folks to see in Pittsburgh are Sufjan Stevens, Barbra Streisand, Eminem, NMH (full band) and Pentatonix. Although the great thing about Pittsburgh is that we have so many amazing local musicians that most of the time those are the shows I prefer to see. Shout-out to: Meeting of Important People, School of Athens, Mark Dignam, Brad Yoder, Donora, Gene Stovall, Barret Black, Formula 412, Emily Rodgers, Liz Berlin, The Wreckids and Uke Skywalker and Tuba Fett.

Thanks Josh and Gab! Seriously, I just love what you two are doing. You should be winning Grammy's!
Posted by Hughshows at 7:30 AM