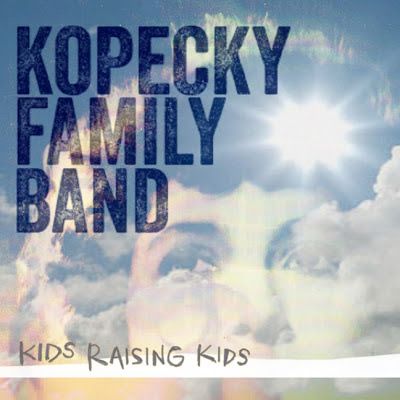 "Sometimes song is thicker than blood.
First drawn together amid a college dorm ‘pass the guitar’ session in 2007, Kopecky Family Band co-founders Kelsey Kopecky and Gabe Simon quickly realized that they shared something beyond their alma mater.
“Gabe started playing and I was totally blown away,” Kopecky remembers, “by his melodies, his talent. Something in the way he played felt so familiar to me and moving. I asked him if he wanted to get together and play some, sing some. And a few days later we did that. And it was crazy, it came together immediately– it just fit.”

Check out the band's official Website, Facebook, Twitter, YouTube and iTunes. The band arrives in Pittsburgh this upcoming Thursday touring behind their latest album, "Kids Raising Kids" at Club Cafe supporting He's My Brother She's My Sister. My thanks to Steven Holmes (Guitar) for taking a few minutes to participate in this edition of First/Last.

The first album you ever bought?
“Disney Classics” on cassette. I was probably six or seven years old and cherished it more than most things in my young life at that time.


Favorite album of all time?
I have never really felt confident answering this question, because the answer changes fairly often. Right now, I am really digging Tame Impala's “Lonerism”.


Least favorite/most disappointing album?
I was pretty bummed about everything Weezer came out with post-green album. The first three were the cat's pajamas...then I don't know what happened.


First concert attended?
The first I paid for and attended by my own free will was Sufjan Stevens in Atlanta, GA. It was the tour that he and his band dressed as giant birds.


Favorite concert ever?
The first one that comes to mind was being backstage for Ben Folds Five's first show reunited.


Least favorite concert?
A punk rock show when I was in middle school in the Philippines (where I grew up). Sweaty people jumping on me and being rowdy…I hated it. I think I was just having a bad week though, because that stuff used to be my bread and butter.

Any thoughts, experiences about Pittsburgh?
Beautiful city. Last time we traveled through, I had the terrifying duty of navigating our van and trailer through a snowstorm at 5am while the rest of the band slept. Visions of an airborne van soaring off of a mountainside greeted me more than once that morning. Suffice to say, we made it out unscathed.

Thanks, Steven. Man, I can't tell you how many musician's cite Weezer as a disappointment. I couldn't name one person who loves their later catalog.
Posted by Hughshows at 6:13 AM