Image of the Day-"Lake Erie" 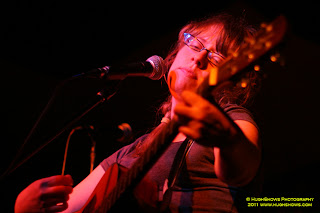 Boca Chica
The Smiling Moose
Thursday, May 12, 2011
Southside
Seeing Boca Chica live is a total crap shoot. Not if they are going to be good or not (which they were) but what configuration the band will be. There has been a drastic personnel change each and every time I have seen the band play. This particular line-up included members of The Harlan Twins, The Slow Reel, and The Central Plains backing  up Hallie's tunes with some muscle. This was the first night of a Midwest tour and save for a few inevitable rusty kinks, I thought they sounded spot-on.

Posted by Hughshows at 3:53 PM