Image of the Day-"I Used To Be A King" 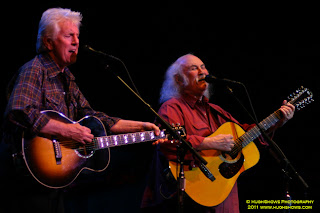 Anyone who gets weened on classic rock, usually gets to CSNY at some point. I wasn't any exception and have seen these guys in one configure or another many times over the years. Maybe my tastes have changed too drastically but even though they sounded really good, I was kind of put off by the whole, "We are hippies who fought the good fight and are still around to tell about it" stance they are imprisoned by. I was done early on when Graham introduced the second song by saying, "I wrote this for Joni". Ugh...people payed $75 for this shtick? I guess since the place was sold out. Another perspective here.

Posted by Hughshows at 6:01 PM