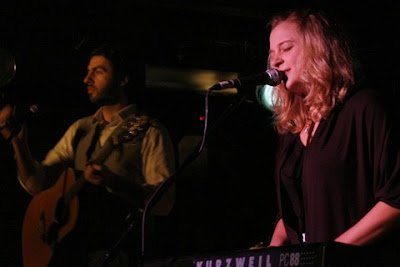 Misty and Nick are singer-songwriters who have shared the stage many times. They are collaborating on a project they are calling 'Clyde' named for a "deep, quiet shadow of Central Texas between Eula and Abeline on Highway 20" and bringing their show to Pittsburgh this weekend. Also on the bill will be The Wandering Bears from Iowa and local stalwarts Brewer's Row. Misty and Nick were cool enough to participate in this edition of First/Last.

First concert attended?
Misty: That I remember...ZZ Top.
Nick: Bob Dylan when I was 16 in Normal, IL!

Favorite concert ever?
Misty: Erykah Badu in Cincinnati.
Nick: My first concert ever, the Bob Dylan show in Normal, IL.

Least favorite concert?
Misty: Tori Amos at South by Southwest. Not because of her entirely, but because of all the jerks around me.
Nick: The same concert because it had to end!

Any thoughts, experiences about Pittsburgh?
Misty: The little I have experienced of Pittsburgh has all been amazing...welcoming, hip, friendly. I love the band I've shared the stage with there twice now, Brewer's Row. If there are more bands like them in Pittsburgh, I may move there. I love the Waffle House that's run by college students from 11PM to 4AM with the live talk show. I've never seen anything like it.
Nick: Brewer's Row and The Hohman family made Pittsburgh feel like home for us (Misty and me), and I will forever associate the city with their kindness and their passionate, heartfelt tunes!

Thanks so much Misty and Nick. I am with you both 100% in regards to the Hohman family. Awesome people in an awesome band.
Posted by Hughshows at 10:01 AM