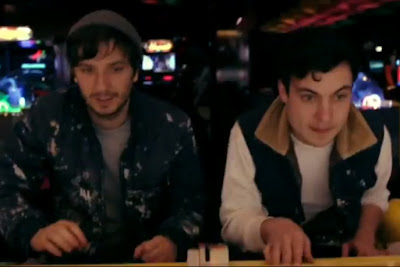 If you read and believe the hype surrounding these guys, they are the new band to put Pittsburgh music on the map. Whether or not that is the case is to be determined but they do have some cool pedigree to back up that claim. They have been picked up by Frenchkiss, have toured to support some name-worthy acts recently and let's not forget the whole The Takeover UK history. Their debut CD release gig is tonight and I am told if you want to shine, get there early as this will be a crazy sell out. With all that is seemingly blowing up around them, it was really nice of Nic and Josh to participate in this 'Awesome Shop Debut CD Release Edition' of First/Last Fridays.

The first album you ever bought?
Josh Sickels : It was probably "Please Hammer Don’t Hurt 'Em" by MC Hammer.
Nic: Kriss Kross, I think it was self-titled or maybe it was called jump.

Your last album bought?
Josh: People buy albums? Actually, it was probably the new My Morning Jacket.
Nic: Yeah right, you didn't buy that. You haven't bought an album since 2006. The last one I bought was a Van Morrison B-sides comp called “The Philosophers Stone”. It's a double disc but only has like four good songs.

Favorite album of all time?
Josh: “36 Chambers” by Wu-Tang Clan.
Nic: “Astral Weeks” by the aforementioned Van the man.

Least favorite/most disappointing album?
Josh: Least favorite is pretty wide open right? I mean, I could just pick a Nickelback record... but if we're going by what I’m SUPPOSED to like, and didn’t, then I’d probably say the last two Radiohead albums. I get grief for that, especially “In Rainbows”, but I feel like they've seriously lost their touch in the last 5 years.
Nic: Dude, "All I Need" is like their best song ever. Probably that Scarlett Johansson album of Tom Waits covers. Why do all pretty girls think they can sing? And why would anyone ever attempt to cover a Tom Waits song?

First concert attended?
Josh: Bad Religion in 1993.
Nic: The Ramones in 1996. Josh was there. Though we weren't really friends at the time because he tried to steal my skateboard a few weeks earlier.

Last concert?
Josh: It's been awhile since I’ve been to a "concert" so to speak, but I’ve been to a bunch of smaller shows. I went to check out this band Givers who we are about to tour with when they stopped through Pittsburgh. Incredible live band.
Nic: Social D at Stage AE. I thought it'd be cool, but I lost interest half way through.

Favorite concert ever?
Josh: at the drive-in on the in/casino/out tour. Just unbelievable energy and explosiveness. I’ve never seen a band match the raw intensity of those guys back in the day. I don’t really care for Mars Volta, but atdi will always have a place in my heart.
Nic: Either Elvis Costello featuring Emmy Lou Harris, or the Black Lips and Little Dragon at SXSW this year. The best of both worlds on both accounts.

Least favorite concert?
Josh: Probably when I went to see The Misfits without Glenn Danzig and they played 30 songs, and 26 of them were new ones. My 13 year old self was seriously pissed off.
Nic: I hear Danzig without the Misfits is almost as bad. Umm, I don't know, I paid 7$ to see Ice Age at the Shop last night and they were pretty horrible.

Favorite thoughts, experiences about Pittsburgh?
Josh: My favorite pittsburgh experience is when the Steelers won the Superbowl back in 2005. The whole city went berserk, and even though some dubious activities took place, it just showed the all around sense of passion and pride that we as Pittsburghers feel for our city and sports teams… I had nothing to do with the riots though...sort of.
Nic: I did, or tried to after the last Cowher championship. I went to jump on a car but it was covered in snow so I slipped off and fell right on my back. And my rear view mirror got ripped off that night, as well. So I got some instant karma.

Thanks guys. The thing is, your music is great. All the hype is in that pudding.

Posted by Hughshows at 9:46 PM