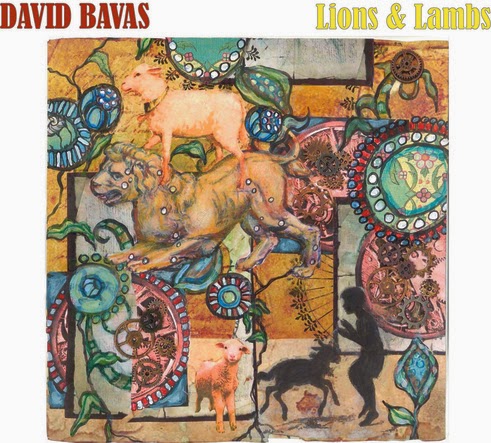 "David Bavas spent the last 13 years in Seattle, Washington recording 3 albums there, but relocated to East Nashville in the Fall of 2012 to be closer to the growing Americana scene in Nashville. With his self-titled debut album in 2005, David Bavas and his band The Down Comforter were a showcasing act at SXSW and their music was featured on NPR's All Songs Considered Open Mic. His sophomore release "Songs of Love, Death, and Trains" showcases Bavas's dark voice and his songwriting that comes out of a small-town Americana upbringing. "Songs of Love, Death, and Trains" was recorded and mixed by Kevin Suggs, whose past credits include the Shins, Cat Power, and The Minus Five."

David Bavas is a singer-songwriter currently residing in Nashville, TN.  He grew up in Pittsburgh and knows the place well. Maybe that is why he decided to have his release party here next week (3/21) for his new album "Lions & Lambs" which is out today. I really want to thank him for taking the time to participate in this edition of First/Last.

The first album you ever bought?
Probably Bon Jovi “Slippery When Wet”.


Your last album bought?
John Moreland “In The Throes”.


Favorite album of all time?
Townes Van Zandt “Live at the Old Quarter”.


Least favorite/most disappointing album?
I usually buy records at shows to support the artist that I like, so I haven't bought a bad one in years.


Favorite concert ever?
Carissa's Wierd final show at the Showbox in Seattle, WA.


Any thoughts, experiences about Pittsburgh?
I grew up in and around Pittsburgh, PA. I've lived in Seattle and now call East Nashville home. I hold Pittsburgh as one of my favorite places to perform in all of the US. I've been a Steeler's fan my whole life and love every time I cross through a tunnel and come out to see the City of Bridges.

Thanks, David. Man, that Carissa's Wierd show must have been something. Talk about a band I wish I was able to see.
Posted by Hughshows at 5:11 AM