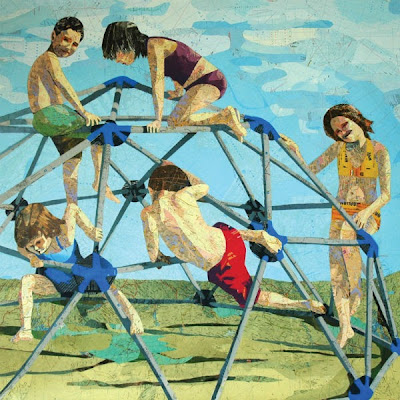 "Superhuman Happiness was founded in 2008 to seek joy and love through shared rhythm and melody, composed and improvised. Their mission is to pursue a happiness greater than that experienced by an individual mind. The group is currently mixing their second full length record, collaboratively composed over the course of a year using various theater/music games to develop a potent and fresh style of performing music."

Check out the band's official Website, Facebook, Twitter, BandCamp, SoundCloud, Last.fm and Spotify. The band hits Pittsburgh this Friday night at the Thunderbird Cafe in support of their latest album, "Hands". Much thanks to Stuart Bogie (Saxophone/Keyboards/Vocals) for taking a few to participate in this edition of First/Last.

The first album you ever bought?
I don't remember exactly, and bought is used loosely here. My parents bought records for me as a kid. One of these: “Signals” by Rush, “Eye of the Tiger” by Survivor, Peter Criss' (of KISS) solo record or “Donna Summer” by Donna Summer.


Favorite album of all time?
I never get tired of “Harvest” by Neil Young.


First concert attended?
Ella Jenkins, the folk singer, was probably my first concert. My first big fat rock show was Johnny Clegg and Savuka, Tracy Chapman, and Bob Dylan. My first club show was the Beastie Boys on their ‘Check Your Head Tour’ with fIREHOSE opening.


Last concert?
I just saw Battles, Red Baraat, and Janka Nabay and the Bubu Gang play on Harvey Weinstein’s estate for a handful of lucky private party goers. They were awesome!


Least favorite concert?
I don't remember, probably one of my own.

Any thoughts, experiences about Pittsburgh?
Excellent radio, special sandwiches, beautiful homes with porches and decks up and down winding hills. I think Art Blakey is from there, right? Every time I got to Pittsburgh I want to stay and explore and learn more about the area. It is a gorgeous city with a deep history!

Thanks, Stuart. Very eclectic tastes you got there, man. I don't think I have done more 'Google-ing' for any other Q&A than I have for yours! BTW, how does one get invited to Harvey Weinstein's crib?
Posted by Hughshows at 5:39 AM