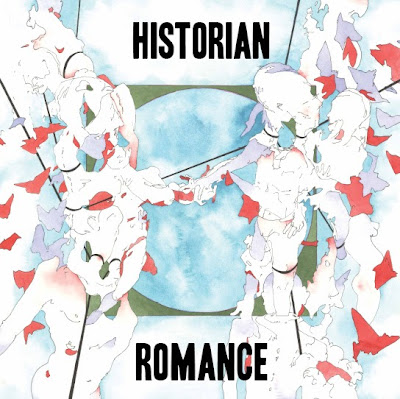 "Historian just released a fantastic new EP. Titled Romance, the EP’s tracks can range from light, bouncy and melodic to crushingly heavy, all tied together by frontman Nate Hurst’s morose croon. Here, we see synths of the future spliced with tones of the past, and the result is something that feels fresh and familiar." - Tyler Pane (Paste)

Check out the band at their official Website, Facebook, SoundCloud, Twitter and BandCamp. We hang out in Alaska for the Paste 50 States Project with Historian. The band recently released their latest EP, "Romance" and I want to thank Nathan Hurst (Keys/Vocals), Marc Bourdon (Bass/Keys) and Jason Lessard (Drums) for taking the time to participate in this edition of First/Last.

The first album you ever bought?
Nathan Hurst: Nirvana's "Nevermind" or maybe it was "In Utero" I can't quite remember... anyways, it was out of my control.
Marc Bourdon: Fresh Prince and DJ Jazzy Jeff “Homebase”.
Jason Lessard: Def Leppard's “Pyromania” on cassette.


Favorite album of all time?
Nathan: That is really hard (I have so many) but if I was pressed I would have to say Modest Mouse "The Moon and Antarctica". That album is still one that I listen to a lot.  It was a game changer for sure.
Marc: “Dark Side of the Moon”.
Jason: Impossible to answer.


Least favorite/most disappointing album?
Nathan: I don't know that I have a least favorite album. Probably something that Pitchfork gave a 10. Like maybe Kanye's “Dark Twisted” whatever bullshit.
Marc: Kings of Leon “Only By the Night”.
Jason: Also hard to answer but I remember being very disappointed in Blonde Redhead's “Misery is a Butterfly” (and every subsequent release). Such a downturn. I was a huge fan up until that point.


First concert attended?
Nathan: My first concert ever was Smashing Pumpkins at the convention center in my home town of Rapid City, South Dakota. The Smashing Pumpkins had just released "Melancholy and the Infinite Sadness". I was probably about 13 and my mom took me to see them.  Bush and No Doubt were also on the bill. I don't remember the Bush and No Doubt stuff that well but the Smashing Pumpkins were great.  That album is still so singular in my mind, even if its super ‘90s. Nothing really compares.
Marc: Korn and Rob Zombie.
Jason: Elton John at Hartford Civic Center in 1986(?).


Last concert?
Nathan: Last "concert" was last night, but I don't know if seeing a metal show at a bar with about 10 people in attendance qualifies as a concert. My friends band Terraform played at this hole in the wall bar called the S Lounge. They're great. They're sort of thrash. Other than that, Historian got to open for Primus about a month ago. That was pretty surreal.
Marc: Primus.
Jason: Portland's Albatross at Taproot in Anchorage.


Favorite concert ever?
Nathan: Frog Eyes. Hands down. I saw them when I was living in LA. They were pretty mesmerizing. Carey Mercer was incredible to watch. The shit he does with his voice, and his whole stage presence and everything... it was a sight to behold. I don't know that I'll ever see anything like that again. I remember watching them and being like "Oh right...this is rock and roll". I'd love to get hammered with that guy.
Marc: Favorite ever was the St. Vincent set at Sasquatch. Most fun I ever had was Cowboy Mouth in Colorado Springs in 2003.
Jason: Every time I've ever seen Dirty Three.


Least favorite concert?
Nathan: I'm not sure that I can think of a least favorite concert... I'll just have to leave that one blank.
Marc: I can’t even remember the dudes name, it was a hip-hop guy in Anchorage.
Jason: Was taken to see Tori Amos once. It was awful. And further embarrassing because I was spotted leaving it by some friends with good taste.


Any thoughts, experiences about Pittsburgh?
Nathan: I've never been to Pittsburgh, so I don't have much of an opinion about it. It's sort of post-Apocalyptic right? No, I'm just kidding.
Marc: I guess the Pirates are a decent baseball team, but I'm a Cubs fan. I will be in Pittsburgh in a few months. I’ll give you an update.
Jason: Don Caballero changed the way I listen to music.

Thanks, fellas. Good call on the Tim Easton album, Nathan. Been a LONG time fan of Tim and his music.
Posted by Hughshows at 6:08 AM