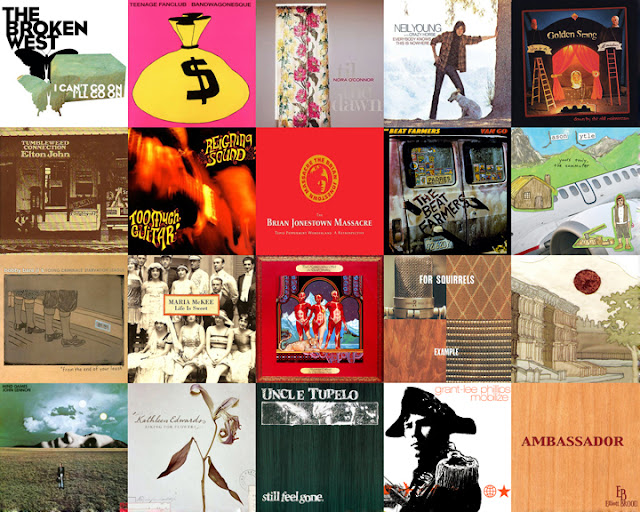 In deciding to compile this list, I tried to be as honest as possible in that I found myself several times resisting the urge to include albums or musicians that I 'thought' I should have on my list but don't necessarily listen to all that much. For example, there's a reason I don't have any jazz on here. I don't find myself reaching for Miles Davis over R.E.M. so why be a poseur and include it? These are favorites...'MY favorites'.
A few notes: I shied away from live albums (hence, no "The Last Waltz"), greatest hits (with one exception), compilations and having more than one album from a particular band. What, was I going to list the ENTIRE Beatles catalog? A few times I did include multiple albums from a songwriter whether it was a solo album or offshoot band, so you may spot a few repeats in that respect. I also could have easily included many local Pittsburgh releases but decided to keep them for a separate list coming soon.
With that being said, I hope you enjoy this list as much as I had making it. Hopefully in putting this together, you the reader, will discover something you never heard before or reacquaint yourself with a long,  forgotten album. Look out for the remaining installments here every Sunday.

The second in a series of posts eventually culminating in my favorite album of all-time. I noticed in prepping this installment that I really love all these albums and I am constantly considering moving them up the list. They all are worthy of being close to anyone's top. If you aren't familiar with these bands or albums, go out and at least try to familiarize yourself with them as soon as you can. I have come to realize this has become so damn hard to rank. Read the first installment here.

61. The Broken West-I Can't Go On, I'll Go On (2007)
This is one of those bands who I feel incredibly lucky to have seen before they broke up. With only two fantastic albums under their belt, they disband. Such a bummer. Thankfully, songwriter Ross Flournoy has a new-ish band in Apex Manor. This record is their debut and always sounds as fresh as the first time I heard it every time I play it.
Choice Tracks: 'Down in the Valley'. 'You Can Build an Island'.

62. Teenage Fanclub-Bandwagonesque (1991)
Speaking of 'power pop'...Teenage Fanclub's seminal album captures what The Broken West would do several years later, but with more of an edge. Again, I feel lucky to have seen this band live.
Choice Tracks: 'The Concept', 'December'.

63. Nora O'Connor-Til the Dawn (2004)
This album is the only solo effort from Nora who has become a mainstay in the Chicago music scene, as a member of the long-lost, long-loved band The Blacks as well as an integral member of Andrew Bird's Bowl of Fire, Nora has the voice that people in the know (Robbie Fulks, Neko Case) go to. This album is such a little gem and she actually did tour for it AND actually hit Club Cafe on that tour and I ACTUALLY missed it. One of only a handful of shows that I truly regret missing in my life.
Choice Tracks: 'My Backyard' 'Tonight'.

65. Golden Smog-Down By the Old Mainstream (1996)
If I had to list my 'Favorite Concerts of All-Time' (hmmmm....that might be fun), I would definitely have to rank the tour behind this album at Graffiti close to the top. This is the 'supergroup's' second release and arguably their best. With members of Wilco, The Jayhawks, Souls Asylum among others, you really can't go wrong.
Choice Tracks: 'V', 'Radio King'.

66. Elton John-Tumbleweed Connection (1970)
The string of albums Elton John put out in the early seventies are hard to touch for the sheer quality of incredible music. I love this album for being both 'funky' and 'country' simultaneously, a strange combination that works.
Choice Tracks: 'Ballad of a Well-Known Gun', 'My Father's Gun'.

67. Reigning Sound-Too Much Guitar (2004)
Greg Cartwright is one bad-ass electric guitar garage rock monster. Bringing vintage R&B influences into modern rock, The Reigning Sound are one of the most criminally underrated bands releasing albums today. This album, their loudest' (read: most awesome), is a sonic assault that never fails to get the blood flowing. Once again, I feel lucky to have seen this band as a trio ROCK out Smalls several years ago.
Choice Tracks: 'Excedrine Headache No. 265', 'We Repel Each Other'.

68. The Brian Jonestown Massacre-Tepid Peppermint Wonderland: A Retrospective (2004)
I made a point of not including any 'Greatest Hits' or 'Best of' collections on this list but made one exception for this two-disc 'Retrospective'. The single albums of BJM have always been spotty affair for me but this is 38 great songs all together with nary a bummer in the bunch.
Choice Tracks: 'Who?', 'That Girl Suicide'.

69. The Beat Farmers-Van Go (1986)
Before there was ever 'alt-country' there was The Beat Farmers. Unfortunately they are probably known best for their dopey 'Happy Boy' but this album proves that they ain't no joke.
Choice Tracks: 'Riverside', 'Gun Sale at the Church'.

70. Jason Lytle-Yours Truly, the Commuter (2009)
I am always a little surprised just how much I love this debut solo album from Grandaddy frontman Jason Lytle. It's a dreamy, sometimes sleepy collection of songs that never seem to be striving for any sort of grand 'climax' but somehow they totally get into your head. Wait, I did just kinda described Grandaddy music, so why should I be surprised?
Choice Tracks: 'Ghost of My Old Dog', 'Brand New Sun'.

71. Bobby Bare Jr's Young Criminal Starvation League-From the End of Your Leash (2004)
Another essential musician who opened my eyes to what indie rock could offer after spending WAY too much time living and breathing Grateful Dead following the almost decade after Jerry's death.
Choice Tracks: 'Your Adorable Beast', 'Valentine'.

72. Maria McKee-Life is Sweet (1996)
My wife, who is by no means a music aficionado, turned me on to Maria as we started dating and I must thank her bringing Maria and her music into my life. Certainly another must see musician before I die thing going on with her.
Choice Tracks: 'Life is Sweet', 'Absolutely Barking Stars'.

73. Paul Kantner, Grace Slick and David Freiberg-Baron Von Tollbooth & the Chrome Nun (1973)
One of the most obscure psychedelic oddities in rock music from the Jefferson Airplane/Starship families. It doesn't hurt, as many of those San Francisco hippies tended to do back then, to have an 'all-star' lineup of session players helping out, including the rest of the Airplane line-up, Jerry Garcia and The Pointer Sisters of all people pitching in. Track this record down. Bonus points for having Grace Slick being the least annoying of her career on this record.
Choice Tracks: 'Ballad of the Chrome Nun', 'Fat'.

74. For Squirrels-Example (1995)
A month before this, the band's second record, was released, they were returning from CMJ when their tour van crashed and killed the lead vocalist, bassist and manager. The ultimate story of 'what if?' in alternative rock, this album displays the very beginnings of a band finding it's voice and literally losing it before any potential could be realized. So sad.
Choice Tracks: 'Mighty KC', 'Orangeworker'.

75. Bright Eyes-I'm Wide Awake, It's Morning (2005)
I was never a big (or even casual) Bright Eyes fan and still wouldn't call myself one but this album is killer. Released the same day as the band's 'electronic' companion "Digital Ash in a Digital Urn", an album I have intentionally never listened to yet, the acoustic folky-vibe sort of reflects what Conor Oberst was attempting to realize with the disappointing Monsters of Folk supergroup.
Choice Tracks: 'Another Travelin' Song', 'At The Bottom of Everything'.

76. John Lennon-Mind Games (1973)
Lennon's least 'in your face' album containing my favorite tunes he wrote as a solo Beatle. His protest 'anthems' aren't venomous and his love songs aren't sappy. Fittingly, the perfect balance for him.
Choice Tracks: 'Mind Games', 'Bring on the Lucie (Freda People)'.

77. Kathleen Edwards-Asking for Flowers (2008)
This album came out of nowhere and finally had me take notice of Kathleen and her music, including her excellent previous two efforts. What sealed the deal was seeing her at WYEP performing the title track. Forward to 10:47 here to listen to exact moment this album became my favorite of 2008.
Choice Tracks: 'Goodnight, California', 'Buffalo'.

78. Uncle Tupelo-Still Feel Gone (1991)
Only discovering the brilliance of the band way too many years after they broke up, the seemingly effortless rawness of this second album epitomizes what I love about this band.
Choice Tracks: 'Looking For a Way Out', 'Gun'.

79. Grant Lee Phillips-Mobilize (2001)
Grant Lee Phillips' second solo album is his most 'pop' record and still I don't hate it. In fact, it's my favorite of all his solo releases, which are all great.
Choice Tracks: 'We All Get A Taste', 'Sleepless Lake'.

80. Elliott BROOD-Ambassador (2005)
These guys are simply an amazing band. I have seen them a couple times and here's another pathetic example of this weird Canadian thing were they can't break out under the 49th Parallel. Such a crime.
Choice Tracks: 'Twill', 'Johnny Rooke'.

Posted by Hughshows at 1:46 AM