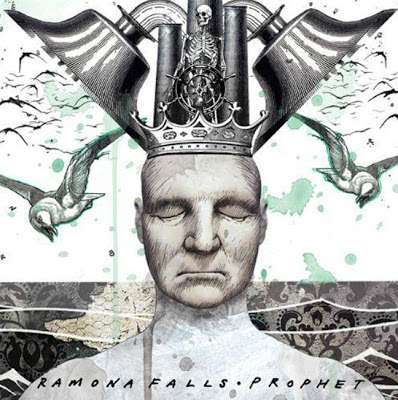 "Ramona Falls is the musical brainchild of Brent Knopf. Brent, a Portland Oregon native, was also one-third of the band Menomena from 2000-2011.  Like most of us, Brent Knopf watches a lot of YouTube videos, only he’s not watching kittens playing piano. Rather, his tastes err on the more experimental side of things—like people who attempt perpetual motion machines using magnets. “I love that they’re trying to harness an endless supply of energy,” says the Ramona Falls frontman, “and that they go against conventional wisdom in the hopes of true discovery.”  Which is exactly what Knopf did last year, when he decided to quit the acclaimed art rock trio Menomena and devote his time to one epic, personal vision. Prophet, the second Ramona Falls album, is sonically, lyrically and thematically brighter. It’s also more organic and personal than anything he ever contributed to Menomena, or as the singer/multi-instrumentalist explains, “it’s more of a rapid transit line between my sleeve and my heart.”

Check out the band at it's official Website, Facebook, Twitter, YouTube and Tumblr. They are stopping in Pittsburgh at Brillobox tomorrow night supporting it's latest release, "Prophet', on a bill with locals Nevada Mountains and The Show. My thanks to frontman Brent Knopf for taking the time to participate in this edition of First/Last.


Favorite concert ever?
Bon Iver at Primavera in Barcelona on the ‘For Emma’ tour.

Any thoughts, experiences about Pittsburgh?
Pittsburgh reminds me of Portland, and I've always been enamored with its unassuming charm.

Thanks, Brent. This whole comparison to Portland is cool but I am still not getting it. Probably because I've never been to Portland.
Posted by Hughshows at 7:30 AM