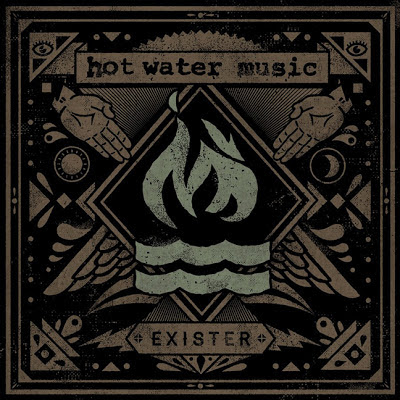 "Hot Water Music is a Gainesville, Florida punk outfit known for Chuck Ragan and Chris Wollard’s raspy vocals, as well as their searing Jawbreaker-esque guitars on earlier albums. The act first formed in 1993, and their first record, Finding the Rhythms, was released on No Idea and Toy Box records. Many fans commonly refer to Hot Water Music as the abbreviation, HWM. The name Hot Water Music comes from a Charles Bukowski book."

You can the band online at their official Website, FaceBook, Twitter, YouTube, and MySpace. The band plays Altar Bar on Wednesday night with support from La Dispute and The Menzingers. My thanks to George Rebelo (Drums) for taking the time to participate in this edition of First/Last.

The first album you ever bought?
Iron Maiden “Killers” but the first record's I got was The Police ‘Roxanne’ 7" and Bob Marley’s ‘I Shot the Sheriff’ 7".


Favorite album of all time?
The Beatles’ “The White Album” and Iron Maiden’s “Piece of Mind” ( made me want to play drums).


Least favorite/most disappointing album?
Too many to name.


Favorite concert ever?
Fugazi years ago in Gainesville and Iron Maidan ‘83.


Least favorite concert?
I bartend at a club in town when I'm home so I get to see a ton of crap.


Any thoughts, experiences about Pittsburgh?
Beautiful city, reminds me of Germany a bit. Pretty clean, too.


Thanks, George. I always love when drummers answer these questions. You always seem to get a certain unique perspective from the guy tucked in the back of the stage.
Posted by Hughshows at 2:30 PM