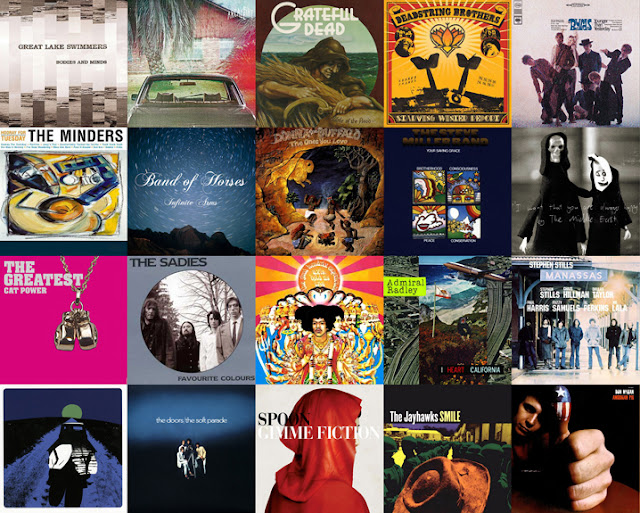 In deciding to compile this list, I tried to be as honest as possible in that I found myself several times resisting the urge to include albums or musicians that I 'thought' I should have on my list but don't necessarily listen to all that much. For example, there's a reason I don't have any jazz on here. I don't find myself reaching for Miles Davis over R.E.M. so why be a poseur and include it? These are favorites...'MY favorites'.
A few notes: I shied away from live albums (hence, no "The Last Waltz"), greatest hits (with one exception), compilations and having more than one album from a particular band. What, was I going to list the ENTIRE Beatles catalog? A few times I did include multiple albums from a songwriter whether it was a solo album or offshoot band, so you may spot a few repeats in that respect. I also could have easily included many local Pittsburgh releases but decided to keep those for a separate list coming soon.
With that being said, I hope you enjoy this list as much as I had making it. Hopefully in putting this together, you the reader, will discover something you never heard before or reacquaint yourself with a long,  forgotten album. Look out for the remaining installments here every Sunday.

81. Great Lake Swimmers-Bodies and Minds (2005)
Tony Dekker and his band Great Lake Swimmers had a very important role in my musical education in the mid-Aughties and this, their second album, is a gem full of simplistic, acoustic folk.
Choice tracks: 'Song for the Angels', 'Imaginary Bars'.

82. Arcade Fire-The Suburbs (2010)
I have always thought that Arcade Fire was too bombastic and what's the word...overrated? I just wasn't getting it, until this came out. Yeah, it's bombastic for sure but I love these songs and as a concept album, it works perfectly.
Choice tracks: 'Rococo', 'Sprawl II (Mountains Beyond Mountains)'.

83. The Grateful Dead-Wake of the Flood (1973)
Having seen 30 Dead shows in 10 years, for better or for worse, this band was a huge part of my life, musical or otherwise. This album in particular has the best bunch of tunes they have released in their career and the songs played live were always great to hear. With the addition of horns on the album, it added a new element missing from their other work.
Choice Tracks: 'Row Jimmy', 'Here Comes Sunshine'.

84. Deadstring Brothers-Starving Winter Report (2006)
The highpoint in a promising career that seems to have faltered lately. This album showed so much potential in a band that is still touring and hopefully has so more killer music up it's sleeve. How good are they? Check out the song 'Where Are All My Friends?' from a Bloodshot Records comp.
Choice Tracks: 'Blindfolded', 'Sacred Heart'.

85. The Byrds-Younger Than Yesterday (1967)
Hard to choose a favorite Byrds album. Redefining American rock and roll in the mid-sixties ultimately has a plethora of good examples to choose from. This fourth album has bassist Chris Hillman bringing in his songs to the band which are some of my favorites they ever recorded.
Choice tracks: 'Have You Seen Her Face', 'So You Want to Be a Rock and Roll Star'

86. The Minders-Hooray for Tuesday (1998)
The Minders put out a smattering of decent albums then seemed to fall off the face of the Earth. This debut from the Elephant 6 collective is their 'best known' and showed so much promise. Still hoping for a follow up to their 2006 effort, "It's a Bright, Guilty World".
Choice Tracks: 'Hooray for Tuesday', 'I've Been Wondering'.

87. Band of Horses-Infinite Arms (2010)
This band seems to release a great album, then a not so great album and so on over their four album career. This was one of the greats and bests anything they have put out ever. With this rationale, expect their next album to be killer.
Choice Tracks: 'Older', 'Compliments'.

88. Donna The Buffalo-The Ones You Love (1996)
There was nothing like seeing this band when they only had a few albums of material to play from and every show was great. This is their second album and I remember hearing them play it many times over. So much fun.
Choice Tracks: 'Ancient Arms', 'Off To Dreamland'.

89. The Steve Miller Band-Your Saving Grace (1969)
Before he became 'The Joker' and sold zillions of records, Steve Miller defined himself as a psychedelic blues rock guitar god. His early albums are at times spotty but when done right, like here on his fourth album, he proves he was the best band to come out of the San Fransisco 'Summer of Love' even if the album is mostly comprised of cover tunes.
Choice Tracks: 'Your Saving Grace', 'Baby's House'.

90. The Middle East-I Want That You Are Always Happy (2011)
The newest album on the list. Hailing from Australia, these guys put out a killer first album and break up (onstage, no less) a few short months later. They actually did play Garfield Artworks as I found out later but like many times before, I didn't know them when. Bummer.
Choice Tracks: 'Hunger Song', 'Jesus Came To My Birthday Party'.

91. Cat Power-The Greatest (2006)
I never was a big fan of Chan and her music previously but this album (and the free show at Hartwood promoting it) stands out for sure. Was it the 'big band' sound provided by The Memphis Rhythm Band that isn't on her other releases? Who knows? It's a great album.
Choice Tracks: 'Love & Communication' (track down the live band version), 'Living Proof'.

92. The Sadies-Favourite Colours (2004)
Solid, frenetic, alt-country, rock and roll. These guys are the best backing band in the business and when they are able to shine on their own, take notice.
Choice Tracks: 'Northumberland West', 'Why Be So Curious, Pt. 3'.

93. The Jimi Hendrix Experience-Axis: Bold as Love (1967)
The best Hendrix stand alone album proper. What it lacks in 'hits', it more than makes up for in displaying Hendrix' branching out to find a balance between killer songwriting and psychedelic sonic exploration without getting too 'far out' there.
Choice Tracks: 'Little Wing', 'Bold As Love'.

94. Admiral Radley-I Heart California (2010)
Jason Lytle and Aaron Burtch of Grandaddy and Aaron Espinoza and Ariana Murray of Earlimart team up for a one off album that combines both of the band's sensibilities. I would have loved to have seen this tour.
Choice Tracks: 'Ghosts of Syllables', 'GNDN'.

95. Manassas-Manassas (1972)
Early seventies folk rock 'supergroup' from Stephen Stills and Chris Hillman. Seems Stills entire career was running around forming supergroups. This is the most solid of the bunch.
Choice Tracks: 'Colorado', 'The Love Gangster'.

96. Lil' Cap'n Travis-In All Their Splendor (2004)
Another 'whatever happened to these guys' bands. Not many people probably ever heard of them outside of their native Austin where they still sporadically play out which is a shame because this album showed a ton of potential.
Choice Tracks: 'Steady as She Goes', '3.2 Beer of Love'.

97. The Doors-The Soft Parade (1969)
Everyone went through a 'Doors Phase' at some point in their teens. Most of us moved on but you got to admit, this is a cool as hell album which out of all their output still holds up.
Choice Tracks: 'Shaman's Blues', 'The Soft Parade'.

98. Spoon-Gimme Fiction (2005)
Spoon's highpoint IMO. They were indie darlings prior to releasing this album where I felt they never really capitalized on how good this was. I expected them to really 'blow up' but they released an album called "Ga Ga Ga Ga Ga". Dumb dumb dumb dumb dumb.
Choice Tracks: 'The Beast and Dragon, Adored', 'My Mathematical Mind'.

99. The Jayhawks-Smile (2000)
I know I'll get blasted for not listing one of the bands previous albums that had founder Mark Olson on them before he left the group. Too bad, this is a great album, regardless who's on it or not.
Choice Tracks: 'Somewhere in Ohio', 'I'm Gonna Make You Love Me'.

100. Don McLean-American Pie (1971)
Finally, I had to include this album. The title track was the first song that I learned all the words to and it was the impetus in wanting to buy my very first guitar. This album was a monster back when I was discovering music for the first time.
Choice Tracks: 'American Pie' (duh), 'Vincent'.

Posted by Hughshows at 8:30 AM

Love it hugh! I totally agree about spoon!