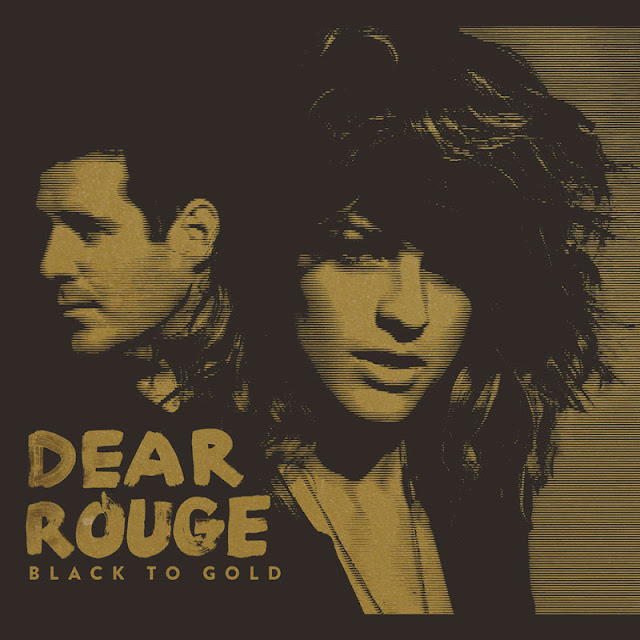 "While bands often spend their early days discovering their musical directions and vying for visibility, the story of Vancouver’s Dear Rouge is something unique and almost unheard of in Canada. The band is led by husband and wife duo Drew and Danielle McTaggart. Between the two of them, they carry years of touring and recording with multiple bands and different musical ventures. Drew and Danielle met in these days of initial musical exploration. Both driven by a passion to create energetic music with a creative backbone, they formed Dear Rouge and their debut EP Heads Up Watch Out."

Dear Rouge is a synth rock pop band from Vancouver who is heading south of the border as they tour behind their latest release "Black to Gold". That tour hits Pittsburgh on Wednesday night (6/24) at The Smiling Moose for the EARLY SHOW at 6pm. I want to thank hubby and wife duo Danielle McTaggart (Keys/Vocals) and Drew McTaggart (Guitar/Vocals) for taking the time to participate in this edition of First/Last.


Favorite album of all time?
Danielle: “Kid A” Radiohead.
Drew: Ooooh… somewhere between Beatles “Rubber Soul” and Washed Out “Paracosm”.


Favorite concert ever?
Danielle: Jay Z at Coachella.
Drew: Ryan Adams at the Paramount in Seattle.

Thanks, guys. Funny how almost every musician from Canada answers Crosby and Lemieux when asked about Pittsburgh!
Posted by Hughshows at 10:03 AM