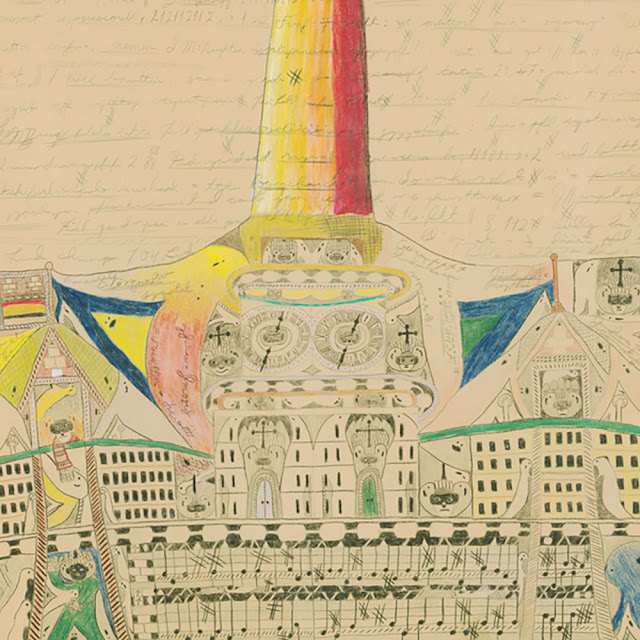 "At the age of twenty, Torres wrote and recorded Nostra Nova, an album greatly inspired by the visual art of Adolf Wolfli and the writing of Swiss psychologist C.G. Jung. Torres developed these inspirations from summer visits to his parents' home in Switzerland, where they lived from Torres' late teens through his mid-twenties. A long-time member of Ohio folk-rock band Southeast Engine, Torres originally recorded and released Nostra Nova in a very DIY fashion in 2006, with the album amassing a strongly devoted cult following over the years. Lyrically, Nostra Nova falls within alternative song structure found in folk an popular music tradition but its unorthodox sonic execution elicits idiosyncratic responses, drawing comparisons to the architectural aesthetic of Frank Gehry. Condensing a vast tract of of memories into one record, Nostra Nova is a forty minute coming of age meditation on love, longing, and the unconscious mind. After touring with Southeast Engine from 2005 through 2008, Torres moved to Cuenca, Ecuador, where he lived off-and-on from 2009 to 2011. In 2012, DZ Tapes, a podcast/blog-turned-cassette label based in Washington D.C., released Torres' self-titled album of demos written and recorded while living in South America. After signing with Misra Records in early 2015 to re-issue Nostra Nova, Torres has fastidiously begun to sort through the 100+ songs he has written since 2006, and plans to release a proper studio follow-up album within the next year."

Adam Torres is a singer-songwriter originally from Ohio, now residing in Austin who has recently re-released his fantastic debut LP "Nostra Nova" via Misra Records. He just began a tour to celebrate and will be in Pittsburgh tonight to play a few songs at Acousticafe. I want to thank Adam for taking the time to participate in this edition of First/Last.

The first album you ever bought?
​First one I remember getting was this kind of strange compilation that Rykodisc put out called "Here it is the Music, Vol. 1". I liked how shiny it was in its CD case. I bought it when I was seven.​


Your last album bought?
“Loyalty” by ​The Weather Station. Tamara Lindeman has a staggering voice; I'm a big fan.​


Favorite album of all time?
​Townes Van Zandt “Live at the Old Quarter”. To me, this record is way better than any studio album TVZ made. Its intimacy gives me the chills, even though it was put out eight years before I was born.


Least favorite/most disappointing album?
I'd rather not talk too much about albums or artists that personally disappoint me so I'll just say that any band or musician that uses one of those 'dentist drill' sounding 'laser' instruments (you know the one) is pretty depressing.


First concert attended?
​The Beach Boys in 1989 at the Jersey Shore. They were touring off of 'Kokomo', I think. My memory is a little hazy. John Stamos may have been there.


Last concert?
​John Prine last weekend here in Austin, Texas. He played for two hours and every minute was spell-bounding.


Favorite concert ever?
​ Jonathan Richman and Vic Chesnutt were touring together, in 2005 or 2006 and I saw them play a really intimate show in Athens, Ohio to a crowd of about 80 people. I felt like I was watching the best absurdist theater imaginable -- Vic Chesnutt's acerbic writing and singing voice hushed the crowd to pin-drop silence and then, minutes later, Johnathan Richman did some salsa moves with his guitar into the audience, starting a spontaneous dance party.​


Least favorite concert?
​Any show I have ever seen that involves a drum solo exceeding 10 seconds.​

Any thoughts, experiences about Pittsburgh?
​ It's been a while since I've been to town but I've really loved playing at Brillobox in the past. Each time I've played in Pittsburgh, I've had a real good time.​

Thanks, Adam. I haven't seen you in so long, buddy. I am thrilled with all the buzz about the album. So well deserved, my friend.
Posted by Hughshows at 5:24 AM