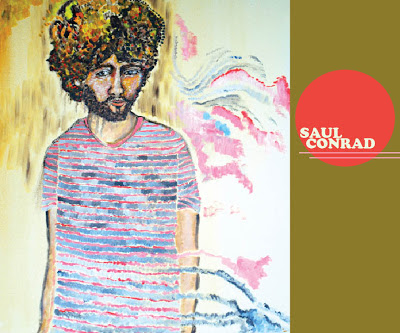 "Saul Conrad is a 24-year old songwriter with a keen poetic sensibility, weaving melodies in and around a rich accoustic world. Saul’s music draws inspiration from Townes Van Zandt and Elliott Smith, but in the end he creates a style that is uniquely his own."

Check out Saul on Facebook and Twitter. Saul stops in Pittsburgh tomorrow night at the Inn Termission Lounge in support of his latest release, "Poison Packets" via Mountain of Leopards, on a bill with Chris Hannigan, Blue Baxter and The Ghostwrite. My thanks to Saul for taking the time to participate in this edition of First/Last.


The first album you ever bought?
“Nashville Skyline”.


Your last album bought?
“The Lost Recordings of Gram Parsons”.


Favorite album of all time?
Oh God...that's tough...that's hardly fair...ahhhh....I think I'm going to have to answer this as the album I'm most possessed by right now---that I think is playing the deepest role in my thinking and writing and conception of music right now: “Mahler's 10th Symphony” (Leonard Bernstein & Wiener Philharmoniker).


Least favorite/most disappointing album?
So many....Lately the new Fiona Apple album was a bummer in the end after the first track causing some pretty strong optimism for a minute.


Favorite concert ever?
That John Prine concert was really something. He played for three to four hours and the songs were ordered so it felt like we were hearing some portrait of his life with all the emotions and ideals unfolding accordingly. It was beautiful.


Least favorite concert?
The Eels in Boston were a huge letdown...most of the songs were indistinguishable and goofy.

Any thoughts, experiences about Pittsburgh?
Never have been. Very excited to change that!

Thanks, Saul. Very different vibe you got going, man. Really enjoying your music.
Posted by Hughshows at 7:30 AM