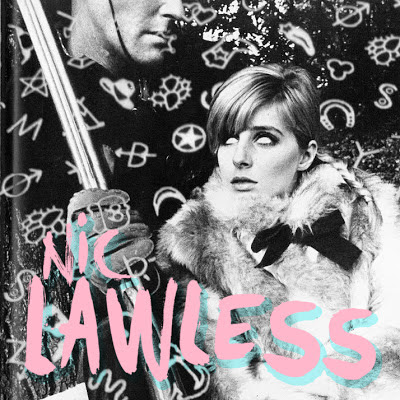 "Nic Lawless came to me when I was travelling this summer. I was working from music festival to festival selling cheese fries (lots of em) and some other shit. On our way to Wakarusa, a music festival in Arkansas, our van got pulled over and searched entirely by the police. They found my ass camped in the back of a U-haul, filled with weed smoke, sleeping pills, and some girl with a bag of meth, among other things. I was so stoned, I just lifted my sunglasses and made some stupid joke. Needless to say, it didn’t go over well. Anyway, I arrived at Wakarusa and it was my first time ever being at a true music festival, with the camping and all. It’s a weird scene at these festivals. I met some really incredible and inspiring young “carnies,” and decided that was going to be the life for me, travelling. I had a lot on my head at this time. I had been thrown out of my home, didn’t know what the future was going to hold, was working pretty crazy hours in intense conditions… whatever. People around the festival circuit heard our story; how we had gotten in trouble on the road and what not. They started tipping me at the register: mushrooms, acid, hash, and tons and tons of pot. I sort of lost my head in all of it, became some sort of novelty cartoon character, working at the register with a fake Cajun accent and repeating the words ‘alright, alright’ a lot, maybe just to reassure myself that I would be alright.
When the trip ended, I went back to New Jersey and stayed on my friends couch for a while. I has decided that I was not going to appear in Tennessee court; that I was ‘Lawless.” I went and bought some thrift store cowboy boots and just walked around lost for a while. I was sunburned, hazy, really just feeling incredibly weightless. I liked the spelling of the name ‘Nic’ because it was similar to Nico, and the song “I’ll Be Your Mirror” (Velvet Underground & Nico) really meant a lot to me at this time. I still love it. I purchased a USB mic, and when I arrived back in Pittsburgh, I moved into my own house with drums, a bass, guitars, everything I needed to make music. On September 11, 2012, I looked at the clouds and just started crying. I went home, wrote a song, and recorded a four track record between September 12 and October 11."

Check out the band on Facebook, Tumblr, BandCamp, Twitter and Wordpress. The band has TWO upcoming in Pittsburgh in the next couple of days to begin a short tour and their awesome debut EP is rockin' my world! My sincere thanks to 'Nic' himself for taking a few minutes to participate in this edition of First/Last.

The first album you ever bought?
To answer your questions, I honestly don’t remember the first album I ever bought, but I do remember the first CD my father ever showed me, which was the Red Hot Chili Peppers “Blood, Sex, Sugar, Magic.” Ironically, about 14 years later, the Red Hot Chili Peppers would also be the ‘worst concert’ I’ve ever been to.


Your last album bought?
The last album I legally purchased was DIIV’s “Oshin” because my longtime friend Daniel engineered it. The last record I downloaded (Shhh…) was probably “The Murder Ballads” by Nick Cave and The Bad Seeds, and damn, it’s a good album.


Favorite album of all time?
I change my musical preference a lot, but at the moment, I would say that my favorite record is the 1969 live album from The Velvet Underground.


Least favorite/most disappointing album?
The last album I can remember being really excited for and then really disappointed by was The Strokes “Angeles.” What an awful mess…


First concert attended?
First concert honestly was N*SYNC with my parents and my younger brother at PNC Bank Arts Center and it fuckin’ ruled!! I don’t remember it well but it was definitely magical and colorful and loud.


Last concert?
The last concert I went to was Loose Ends from New Brunswick, NJ. Those dudes really know how to put on a show, and actually I am heading to see their other band Secret Police tonight. I stole a t-shirt from them, and Dean Cercone stole a Loose Ends one when we were on tour a month or two ago, so, if you’re reading, thanks Mario.


Favorite concert ever?
I’ve enjoyed most concerts that I’ve been to so for me to actually answer this is impossible. Maybe Devendra Banhart at the Theatre of the Living Arts? Or Grizzly Bear and Beach House when they played for free in Brooklyn. Shit, I’ve seen Dean Cercone and Ursa Major play and that was pretty good. I love a live show.


Least favorite concert?
Interesting that RCHP was my first album, because this summer at Bonnaroo, some kid gave me this mushroom chocolate thing, and I ate that shit and went to see RCHP. It was just god-awful. All these old business men at Bonnaroo vibing weird as hell. I have never been a big RCHP fan, but I thought their live show was just going to be this explosive kick in the face. Instead, it was just sad as fuck. They are these old, washed up, corporate, robot machines, playing the hits like they are a cover band of themselves or something. All for the $$$, but who isn’t?

Any thoughts, experiences about Pittsburgh?
Pittsburgh…I love it. I am very happy to be playing in Dean Cercone’s group along with my guitarist Tim from Nic Lawless. His ‘Wherehaus’ and work is really incredible, in my opinion. I ate Primanti’s once but I’ve been a vegetarian for like 9 years so I don’t think I really liked it. I love the art, the music, the bars, the view when you drive into the city at night by PNC park and Heinz Field. I guess I can name drop the Monalloh Foundry collective, which throws excellent events! All good things, all in Pittsburgh.

Thanks, Nic. This EP is really great, man. Only complaint is that it's too damn short! Get to making some more kick-ass music now, bro.
Posted by Hughshows at 7:30 AM