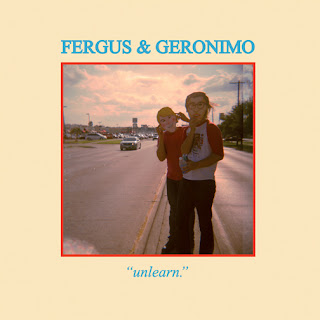 Favorite song: Wanna Know What I Would Do?

I listened to this wildly, wonderfully weird record a ton over the last year. I was way too psyched when they booked a show at Garfield Artworks in February. I haven't been this excited to see a band in a very long time. I get to the venue and openers Ursa Major are setting up and I was wondering if the guys were downstairs or what? Turns out after about twenty minutes, Manny answers the phone and explains to the few people there that F&G are on their way! Oh, O.k....well, where exactly are they? On the turnpike outside Somerset! Let's see, it's 8:30 now, by the time they get here set up and start playing it will be close to 11:30-ish maybe midnight. I only have to get up at 5 A.M....Bummer. I begrudgingly bail. Thinking they might possibly schedule another Pittsburgh date as they tour the hell out of promoting this album, right? They do play Pittsburgh again. A few months later at Ursa Major's Doo Wop mansion. Too bad I didn't find out about it until that day and couldn't swing it! Unbelievable. Oh well, someday I'll get to see them, I think? Until then I do have the kick ass album to listen to. Here's a fun First/Last from Jason and Andrew from back in February.

Favorite album of all time?
Jason: Bruce Willis – “The Return Of Bruno”.
Andrew: Of all time on not sure. Of all week its been Cheveu-"1000". Fucking masterpiece.

Last concert?
Jason: Jimmy Hendrix cover band @ not sure where I was.
Andrew: Concert concert? I dunno, I guess we played this Festival in France called Midi Festival that kind of got into concert status. Lee Ronaldo played, the food was great... south of France. Far out scene overall.

Least favorite concert?
Jason: Whatever Metallica's last concert was.
Andrew: I dunno, I've never been to Woodstock 99 but that sounded pretty weak. Woodstock 99.

Any thoughts, experiences about Pittsburgh?
Jason: It's been great in the past! Is it very beautiful! We're really looking forward to experiencing more of the city this time!
Andrew: I tend to like cities with rivers.

Jason added, “Sorry, I wrote the answers while drunk, I hope they don’t think I am being an asshole. Ha ha". Thanks Hugh!!!

Posted by Hughshows at 6:17 PM