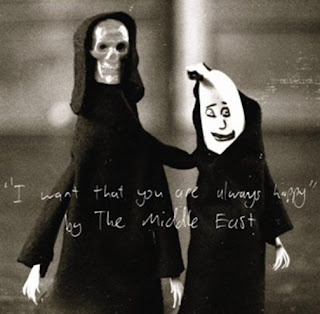 I was so excited to stumble upon this band. They are what I wish Fleet Foxes were. Indie psych folk that's not all hype and has some substance. Nothing against Fleet Foxes, they just bore me. This band are able to effortlessly switch gears from song to song. At times lamenting ballad, other times folksy ramble, and yet some tunes are full out psychedelic rave-ups. I have become obsessed with this album. Naturally, I thought that they had a really bright future ahead of them considering this is their first full length. At a triumphant tour closing show less than a month after the official American release of the album in their native Australia, they announce from the stage that it will be the last show The Middle East will ever play! Noooooooo. Seriously, I was just getting into these guys. Here is the official statement from them:

TO WHOM IT MAY CONCERN :
writing to inform you that we’re ceasing. i’m not sure if we’ll make more music later on or not.
we don’t feel like playing anymore for a whole lot of reasons that i won’t list here and i’m afraid if we continued any longer it would just be a moneygrab. i’d rather go hungry. thank you to all those who came to shows.
we had fun.
t.s elliot wrote ‘you are the music while the music lasts’, but he also wrote that confusing little book about cats so don’t put too much stock in his quotes.
i’m very tired. until next time.
sincerely yours,
the middle east.

Wow, total bummer. Needless to say, countless attempts at a First/Last participation has been met with resounding silence. Ah, who cares, I still love this disc. I probably listen to Hunger Song once a day. Just so good.
Posted by Hughshows at 3:45 PM

Yes gear changing is effortless. I stumbled across these guys too and they are AMAZING. Great review, many thanks!