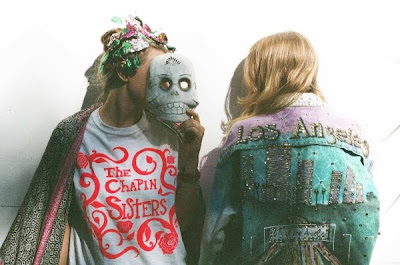 The Chapin Sisters are a sibling duo that have just spent the last few months touring with She & Him as openers and part of their backing band. They are out on a fall headlining tour that brings them to Pittsburgh on Monday. Courtesy of the band, I have a pair of tickets to giveaway to a lucky reader of this blog. To enter, just email me at hughshows@comcast.net with the subject line 'The Chapin Sisters' along your full name in the message. I will contact the winner Monday afternoon. Lily Chapin was kind enough to participate in this edition of First/Last.

The first album you ever bought?
Madonna - "The Immaculate Collection" and The Beach Boys "Golden Harmonies".

Favorite album of all time?
Too many to pick one. Up there are Nico "Chelsea Girl"; Bruce Springsteen "Nebraska"; The Replacements "Tim"; Bob Dylan "Desire."


Least favorite/most disappointing album?
I would feel bad to say... here's one that's not disappointing at all - Fabio "After Dark" (of "I Can't Believe it's not Butter" and romance novel fame) - is hilarious. A friend found it in a discount bin at a record store a while back (paid a dollar for it). It was (I believe) conceived of in sincerity. A gem of soft rock cheese and spoken word interspersed with a few jams where Fabio sings to the ladies in his thick accent over a recurring beat. Please check out the hit "Love Attack”.

First concert attended?
First major rock concert was The Smashing Pumpkins at Madison Square Garden (the "Melancholy and the Infinite Sadness" tour - my friend had an extra ticket).

Favorite concert ever?
The Last Waltz. But I wasn't there! Second place, the concert for Bangladesh (wasn't there either).

Least favorite concert?
Ugh. Sometimes live shows can get rough. Rain, cold, ice, too hot, stinky, expensive, usually it’s not the show but my own expectations that get in the way... I was really sad once when I thought I was going to see the LA Philharmonic play a concert of Bach and it turned out to be P. D. Q. Bach (a show that satires classical music - everyone in the audience was loving it and I was so confused). It was aimed at a different (older) crowd - I thought I had fallen into the twilight zone.

Any thoughts, experiences about Pittsburgh?
Not enough, I'd like to have more! Abigail and I were in Pittsburgh when the Penguins won the Stanley Cup and the whole city started honking. We also used to watch the Pirates play the Mets a lot on TV.

Thanks Lily. I HAVE to track down that Fabio album. It's sounds wretchedly awesome.

Posted by Hughshows at 5:01 PM