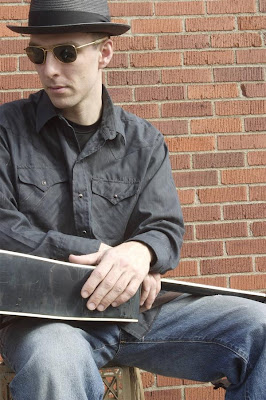 Ben is a local 'ameracana' songwriter who describes his sound as..."Children playing cops and robbers on a rusty caboose while leaves whip by on howling winds." Cool. He is releasing an EP this Friday at Club Cafe and was nice enough to participate in this over the hump edition of the week long spectacular that is First/Last.


The first album you ever bought?
AC/DC-Back In Black.

Favorite album of all time?
U2-War.

Least favorite/most disappointing album?
The second Violent Femmes album because I wanted more of the first.

First concert attended?
At the Electric Banana to see two local bands Half Life and Circus of Death open up for DRI.

Last concert?
The Flaming Lips and I left after 4 songs.

Favorite concert ever?
Billy Bragg and the Indigo Girls at Soldiers and Sailors in Oakland.

Least favorite concert?
By myself as a teenager in my third floor bedroom playing through a Marshall stack (made some enemies).

Favorite thoughts, experiences about Pittsburgh?
Pittsburgh is a fantastic little gem tucked away in the northern Appalachians where it is hard to get into and out of but pretty easy to stay. This can be a brutal place and that sometimes makes it a wonderful place to develop all sorts of psychological muscles that wouldn't be used elsewhere. There are more trees in a hundred mile radius than people--so if you screw up the trees won't hold it against you and that can help your odds of success. It took leaving for a good while to appreciate the influence of geography on the psychology of Pittsburghers. The walls and waves of earth both hide and reveal this city. The twists, turns, and wrinkles keep us entertained and distracted. Overall, I feel that this city inspires and restrains with a unique gravity of visual, emotional, and visceral complexity. Oh, and most of my family lives here so that is my biggest reason for living here.


Thanks, Ben. Sorry you didn't dig that Lips show. I thought it was incredible. I love how you described our area. Rather poetic.
Posted by Hughshows at 5:41 PM