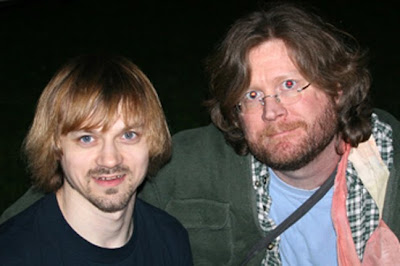 Criminally, I have only seen Weird Paul perform once. He does have the distinction to be the very first musician I ever photographed with my SLR camera, so he has that going for him. He has been a constant music presence in the city for many years and has a solo spot tomorrow supporting Joe Jack Talcum of The Dead Milkmen fame. I am really excited that he took the time to participate in this special Sunday edition of First/Last.

The first album you ever bought?
The first album I remember buying was “Weird Al” Yankovic's "Dare to be Stupid" when I was 14. That was the first music that really "spoke" to me, made me want to write songs. I'd always wanted to be a comedian but couldn't figure out how to go about it. I think “Weird Al” showed me the way. I listened to very little "popular" music before I was 13, other than my parents' Beatles records (and they didn't own anything from Rubber Soul on!)

Your last album bought?
About a week ago, I bought "The Marx Brothers: The Original Voice Tracks from Their Greatest Movies". I think I first starting watching the Marx Brothers when I was around 9. They were always on TV. I watched a lot of Abbott and Costello, Laurel & Hardy, Jerry Lewis & Dean Martin and Bob Hope. But the Marx Brothers were my favorite, because their humor was so fast paced and absurd. My favorite parts were when there'd be total chaos on the screen. Definitely a huge influence on me.

Favorite album of all time?
Having to think about this, I realized I don't really still listen to a lot of music that I used to listen to all the time. But the albums that I used to constantly listen to over and over and that I could still listen to now would be the first Devo album and the first Ramones album. I would actually go as far as to say I learned to play the guitar to that Ramones' album, I was already playing guitar before I got it, but once I bought it, I would play along to the whole thing every day. I'm self-taught and that was my "practice".

Least favorite/most disappointing album?
The one that immediately comes to mind is "Total Devo". That came out in 1988 and I had everything they put out up to then and loved it all. I was so psyched to get that, got it the week it came out. There wasn't a single song on there that I liked. I tried to like it, because I wanted to and after all, I'd bought it. But it wasn't the same kind of music as before. There was very little that was interesting about it! I just got their new album "Something for Everyone", most of which is very enjoyable and fun to listen to.

First concert attended?
My dad took me to see “Weird Al” Yankovic in 1985. It was the Dare to Be Stupid Tour and I had a front row seat. It was the only concert I attended up until 1988 when I saw Henry Rollins and then a few months later, The Ramones. After that, I started seeing lots of stuff, as I started performing myself.

Last concert?
The last concert that I went to (where I was not performing) was a few weeks ago when I saw Shonen Knife at the 31st Street Pub. I was really excited because they've been one of my favorite bands for over 20 years and I never had the chance to see them before. I didn't think I would ever see them live actually, so it was really special. Made me feel like a teenager again.

Favorite concert ever?
I would have to go with Mark Mallman. I opened for him twice, amazing performer and fantastic songwriter. He's actually attempting a world's record this very weekend, playing an original composition live that lasts for 78 hours!

Least favorite concert?
I try to find something to enjoy about every band I see. Sometimes it's not easy! I think the worst thing I ever saw was Jane's Addiction in 1988. They were opening for The Ramones and I had never heard of them. I thought they were awful. The audience hated them too, especially when they started a grueling cover of "L.A. Woman". They actually got booed off the stage. I have never liked anything I've heard from that band.

Favorite thoughts, experiences about Pittsburgh?
I've been performing here for 22 years now. I've seen a lot of bands come and go, some of which I wish I could have seen more of. I think my favorite times were around 1990 and 2001. So many great bands playing all the time, great bands coming to Pittsburgh to play. Now it seems a lot of national touring acts skip Pittsburgh, which is understandable. I've never felt really "in" with the Pittsburgh scene, I've felt like an outsider most of the time. But I've been called an "outsider artist", so I guess that makes sense. I just keep doing what I do, I'm not really interested in what is "cool" right now!


Thanks WP. That Mark Mallman marathon is so interesting. Also, let me be honest in saying please keep doing your thing your way. In fact, what you do trancends 'cool'.

Posted by Hughshows at 9:28 AM