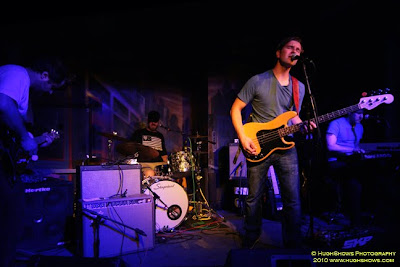 Showtimes. Of the literally dozens and dozens of concerts I see in a single year, I can count on my hand the number of times in my life that I have been late to a show. I am usually early to be able to get a good angle to shoot and I know by now that 8 p.m. probably means 8:30 at the earliest. So it was O.K. that I was shooting Ingrid Michaelson's first three songs at the Point and had plenty of time to catch Chad and the boys up Route 28. I even stopped at the drug store for crying out loud. Imagine my utter dismay when the guy at the door explained to me that they were already playing for a half hour when I walked through the door. I immediately hugged the stage as they were in the middle of a ferocious jam and started to fire off a few 'test' shots as I usually do to get a feel for the room. With that, Chad said his good nights and I missed the whole set. Damn! Chad was cool about it and even extended the end of the song so at least I could get a few. Thanks buddy, next time.

Posted by Hughshows at 8:52 PM