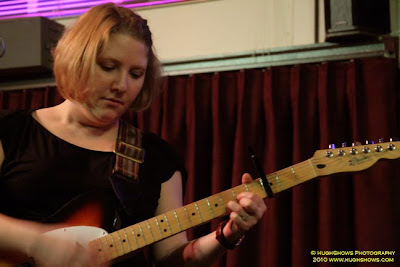 Yeah, yeah...I realize it's not Friday but yours truly is going out of town for a few days and since the blog literally blows up for this wildly popular segment, I will not be denying my dedicated readers their weekly First/Last fix.
Today features Emily, who I partially credit for helping me get into local music in the first place. She will be playing Howler's next Thursday July 8th, and since it's her only confirmed date for the summer, you don't want to miss it. Without further ado:

The first album you ever bought?
Cassette: The Bangles-Everything (2nd grade), or possibly something New Kids on the Block. Though I don't think I ever owned any of their music, just a variety of paraphernalia from J.C. Penney including a giant button, a Joey McIntyre key chain, and a fluorescent orange t-shirt
First CD: Green Day-Dookie (8th grade).

Your last album bought?
The Cynics-Cynicism and This Mortal Coil-Filigree & Shadow.

Last concert?
Lohio in , (while on tour with them...a bizarre show in a college kid's basement...though it should be said that the night before we played a fantastic show in at a great art space). Last big show: Johann Johannsson at the Rex in .

Favorite concert ever?
múm at the Brew House in (2004-ish).
Least favorite concert?
I think I can safely say that it was Up With People in 1996...

Favorite thoughts, experiences about ?
Moving to and meeting a few choice musicians was life-changing for me. I'd listened to a lot of acoustic/more formulaic Americana non-commercial music but I'd never heard records put out on indie labels like Misra, Secretly Canadian, Merge, Kill Rock Stars, etc. Listening to this music, specifically artists including: Thalia Zedek, Jason Molina (Songs: Ohia, Magnolia Electric Company), Cat Power, Nina Nastasia, Tony Dekker (Great Lake Swimmers), Sam Beam (Iron & Wine), Kristin Hersh. It really opened me up creatively to hear this sort of innovative songwriting and art-rock that was new to me. And from that initiation 6 years ago I have somehow landed a contract with Misra, which was an (or I thought because I am a seasoned pessimist) impossible goal a few years ago.

Thanks a lot Emily. 'Up With People'? I honestly don't even know what that is but it just SOUNDS awful.

Posted by Hughshows at 8:54 PM