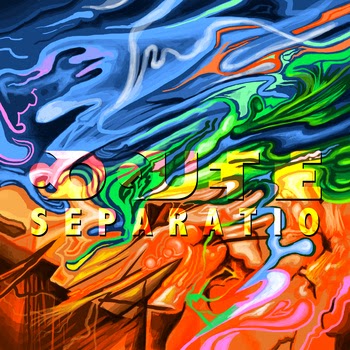 "Coquette is a wildly energetic American indie band with Franco Anglo roots based in Central Vermont. Influenced by Prog Rock and Punk, they have created a varied, frenetic kind of Alternative Rock, with a strong focus on composition. They play regularly in Montpelier, have played several festivals around Vermont, occasionally headlining. They are continually writing new material, play at any opportunity they can grab, and have plans to conquer first New England, then The World!?"

Coquette is an indie prog funk trio from Vermont who's latest release is entitled "Seperatio". I want to thank Colbert Tolbert (Guitar/Vocals), Angus Davis (Bass/Vocals) and Titian Tolbert (Drums/Vocals) for taking the time to participate in this edition of First/Last.

The first album you ever bought?
Cobalt Tolbert: Pretty sure it was the ‘Shrek’ soundtrack… I no longer have any affiliation with Smashmouth… Ahem...
Angus Davis: “Fresh Fruit For Rotting Vegetables” by Dead Kennedys.
Titien Tolbert: The earliest one that I can think of is Marilyn Manson’s “Holy Wood”. Pretty sure we stole that from a French supermarket. So I guess that doesn’t count as bought.


Favorite album of all time?
Cobalt: This past few months I can’t seem to go driving without playing “10,000 Days” by Tool. Before that it was probably “Amputechture” by The Mars Volta or “Favourite Worst Nightmare” by Arctic Monkeys. “Expanding Anyway” by Morning Teleportation is one of my all-time favorites. I’m just gonna say “Bat Out Of Hell” by Meatloaf. That’s right.
Angus: I’m pretty sure it would be “Goblin” or “Wolf” by Tyler, The Creator or something… favorite album… Art Blakey’s “Jazz Messengers” w/ Thelonious Monk. I can say that’s up there at least.
Titien: The one album that I’ve obsessed over consistently for the past few years is “Them Crooked Vultures’” self-titled.


Least favorite/most disappointing album?
Cobalt: I remember being so pissed off when I first heard “...Like Clockwork” by Queens Of The Stone Age; it wasn’t what I was expecting at all. Now it’s my favorite of theirs.
Angus: I don’t listen to music I don’t like, so I don’t have a least favorite album.
Titien: I wanna say “Eat Me, Drink Me”, but I don’t wanna keep talking about Marilyn Manson. I mean, it’s awesome, but it lost so much ROCK.


Favorite concert ever?
Cobalt: I saw St. Vincent a few weeks ago at Higher Ground, and it was just great. Korn and Rob Zombie at Mayhem Fest 2010 was awesome too. I grew up listening to those guys.
Angus: Primusssssss!
Titien: St. Vincent, not only because it was an amazing show, but I was really emotionally invested. I was going through a tough time and it actually made me feel better.


Least favorite concert?
Angus: Probably Matt And Kim.
Cobalt: Yeah, their show was kickass, but the crowd they pulled was the most pretentious, non-inclusive one I’ve ever seen… Oh crap, I just made a bunch of enemies, didn’t I?
Titien: There was some show where the opening band was REALLY bad. They were trying to be weird and experimental, which I appreciate, but it was the first time I looked at a band and just thought “what are you doing? Whyyy?” Just a bad band. There was no rhythm; they weren’t working together.

Any thoughts, experiences about Pittsburgh?
Cobalt: That kid from Weeds REALLY wants to go there.
Angus: They got killer heroes. Like hoagies. They make good steaks, good sandwiches. I know about it.

Thanks, guys. I keep hearing about this character from Weeds but never saw the show. Why does he want to come here? 'Cause there supposedly lots of weed?
Posted by Hughshows at 7:30 AM