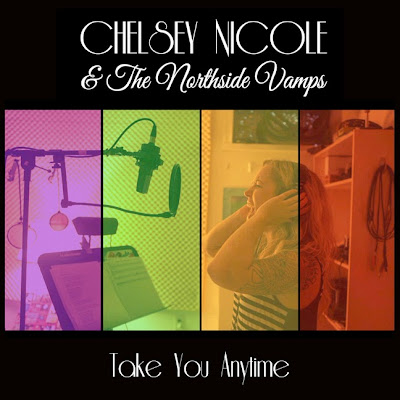 "Chelsey Nicole is a Pittsburgh-based blues, soul and R&B singer whose musical style is inspired by the heavy horns of New Orleans just as much as the raw, lonesome Stella guitar. Rooted in unfiltered emotions and classic vibes, Chelsey’s music is a smooth blend of familiar and fresh tones.
The Northside Vamps act as more than merely a backing band as they not only hold the throwback atmosphere together but they punch it through into today’s world. Composed of varied Steel City jazz and blues musicians from bands such as Wreck Loose and Black Coffee, the group as a whole effortlessly employs timeless lyrics and melodies to exude a natural air of nostalgia for a sound that has never faded away."

Check out the band at their official Website, Facebook, BandCamp and Twitter. Their "Love Through the Line" EP will drop December 17th with the release party happening December 19th at Howler's and today they unveil the debut single, 'Take You Anytime'. I want to thank Chelsey Nicole herself for taking the time to participate in this edition of First/Last.

The first album you ever bought?
Oh, god...I think the first cassette I remember buying is Madonna's “Ray of Light”. I was a 90's gal.


Favorite album of all time?
“Back to Black” by Amy Winehouse. It's pure genius, in my opinion.


First concert attended?
First concert I remember is Hootie and the Blowfish, I think... though I could be making that up.
Last concert?
I went to Austin a few weeks ago and saw Vintage Trouble and Gov't Mule. Pretty rad.


Favorite concert ever?
That's a huge question. I went to All Good Festival one year... saw Dana Fuchs, Galactic, Toots & The Maytals. That has to take the cake.


Least favorite concert?
That's also rough... I've pretty much enjoyed every show I've been to. I'm going to say Grace Potter because seeing her live made me realize I will never be that fierce.

Favorite thoughts, experiences about Pittsburgh?
In general, it's awesome to see people in Pittsburgh working together and playing together and supporting each other. This album came to be because of that type of comradery. Maybe it's because it's a relatively small scene, but either way, the community here is tight and supportive. I'm glad I can be in it even a little bit.


Thanks, Chelsey. I too love the immense support this community we have here gives to each other. It still amazes me ten years on.
Posted by Hughshows at 5:13 AM