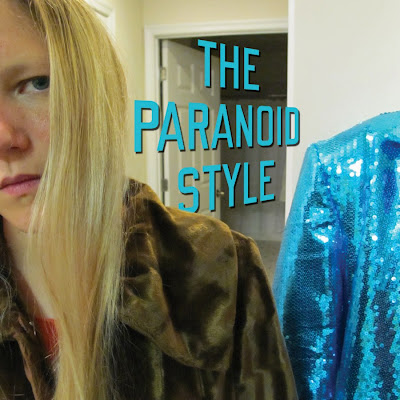 "The Paranoid Style was a special committee convened in 2012 in order to address our country's many pressing problems.Of all the bands that circulated in the late-90s political science-independent underground, the Paranoid Style, known for their pub rock moves and theories of Possibilism, have always been considered the most depraved and dangerous, the most likely to take all the beer and leave. What did they want? What did they really believe? Demos have been passed around for years, but it's only now that we have an official release, The Purposes of Music in General. Finally! This is a singular musical document, shaded by influences from The Mekons to the 'Mats to Anne-Marie Slaughter.- Owen King, author "

Check out the band on Facebook. The band is husband and wife duo Elizabeth and Timothy Bracy. Elizabeth has previously played with Bird of Youth while Timothy's former band is the late, great The Mendoza Line, which is and always will be one of my favorite bands ever. You might also recognize them as contributing 'list makers' for Stereogum. They have just released the debut EP, "The Purposes of Music in General", which, interestingly enough, is the soundtrack of sorts to author Owen King's 'chapbook', 'Special Features and Deleted Scenes'. I have to thank Elizabeth and Timothy for taking the time to participate in this edition of First/Last.

The first album you ever bought?
Elizabeth Bracy: It was either Cyndi Lauper’s “She’s So Unusual” or the Original Cast Soundtrack of the musical ‘Cats’.
Timothy Bracy: The first albums I bought were the 7” for ‘Eye of the Tiger’ by Survivor and ‘Land Down Under’ by Men At Work.

Your last album bought?
Elizabeth: This is an interesting question because, like you, we do a bit of music journalism, which allows us the luxury of getting promotional copies of records quite often. We also have spent quite a bit of money re-buying albums that we’ve lost over the course of moving around these last few years. But that’s boring – you don’t want to know that we had to replace a copy of “Louder Than Bombs”. So: The last album we actually bought with our own money because we really needed to hear it was Dr. Feelgood’s “Down By The Jetty”, which is totally awesome, just by the way. That was a few years ago, now that I think about it. We need to buy more music.

Favorite album of all time?
Elizabeth: I think it’s gotta be “Lincoln” by They Might Be Giants.
Timothy: I’m going to go with “Veedon Fleece” by Van Morrison.

Least favorite/most disappointing album?
Elizabeth: Well, generally, we tend to be more interested those things that are accomplished and successful in an artist rather than fixating on perceived weaknesses. Having said that, and I will go ahead and decapitate myself here - I have always found Patti Smith a sacred cow for which I have very little affection. So many other female songwriters – Debbie Harry, PJ Harvey, Chrissie Hynde, Kendall Meade, Jennifer O’Connor, Beth Wawerna, to name only a scant few – have spoken more profoundly to my experience. So, to answer your question, I was pretty disappointed when I first heard “Horses” after all of the sturm and drang about her special brilliance. Angry mob – please don’t email me.
Timothy: I’m with Elizabeth.

First concert attended?
Elizabeth: I am pretty sure it was Peter Murphy at Roseland in 1992. The ‘Holy Smoke’ tour. He wore a skintight powder blue jumpsuit with a big sun in the middle of it. It was a devastating look. I was terrified.
Timothy: Lou Reed at Merriweather Post Pavilion on the ‘Mistrial’ tour. I was 13. He was refusing to play any songs that made references to drugs, owing to the fact that he had recently “got clean”. It was still phenomenal. I got a t-shirt that had a dollar bill on it with Lou as the president and the caption, “In Lou We Trust”. It was just the best. I wish I still had it.

Last concert?
Elizabeth: We saw James Jackson Toth (Wooden Wand) at a non-functioning Ethiopian restaurant under renovation just last week. They were not serving any food, but the bar was operational, so we didn’t ask too many questions. James was amazing. We also just saw Jonathan Richman at the 9:30 Club. We don’t go to concerts much anymore because we are old, but we never miss the chance to see Jojo when he’s in town.

Favorite concert ever?
Elizabeth: We got to see They Might Be Giants last year and it was one of my favorite times seeing them – and I’ve probably seen TMBG play 50 times over the last 20 years. They played 29 songs – roughly a two-and-a-half hour set and I was mesmerized the entire time.
Timothy: The Replacements, 1989, ‘Don’t Tell A Soul’ tour – it was one of those nights they were so electric you couldn’t help but find religion. I was 15 and I swear to god I was metabolically altered by the experience.

Least favorite concert?
Elizabeth: When I was 20 (so this was 1997, I guess?), I was living in England doing a year abroad at a popular university there. My flatmates were irrationally interested in “dancing” and the whole rave culture and got it into their heads that we should go to this 24-hour festival called “Tribal Gathering” which was out in the middle of a field somewhere in a place called “Luton Hoo”. They encouraged me to “use” one of the tabs of acid that they had brought along with them. The high point was that I got to see Kraftwerk perform a not entirely unentertaining set replete with excellent shiny costumes and a thought-provoking stage show. I guess Daft Punk and the Orbital also played that night, along with like a million other DJs. The low point was it was freezing cold and by the time the sun went down people were burning everything in sight just to survive. We weren’t allowed to leave until the morning. Also, one of my flatmates turned into a crocodile. It was my Vietnam.
Timothy: I watched Paul Simon on the ‘Graceland’ tour (also at Merriweather Post Pavilion) on the lawn during a driving rainstorm. Maybe this has unfairly colored my perception of “Graceland” over time, but something about being pelted with a six-ton deluge of DC summer rain while Simon and crew cheerfully played ‘Call Me Al’ made me bitter. I don’t argue that it’s a good – or okay – album, but this was not an okay experience.

Any thoughts, experiences about Pittsburgh?
Elizabeth: Well, I know Dance Moms takes place there, so I have an enormous reservoir of affection for the city from the gate. I also think that Mike Tomlin is all man in the best possible way and is always welcome to join The Paranoid Style. But I lament that I haven’t really spent any time there, save for an overnight with my mom many years ago when she drove me to Indiana from Long Island for grad school. I have heard only the most wonderful things about Pittsburgh though, that it’s a cool city with a vibrant arts scene, and I’d love to visit soon.
Timothy: I agree with Elizabeth – especially about Mike Tomlin.

Thanks, guys. Love that you two are making music. Please keep it coming and if there is ever a tour, Pittsburgh has to be on that itinerary!
Posted by Hughshows at 7:30 AM