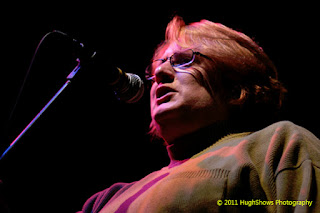 I have been 'unofficially' shooting shows for WYEP-FM for two years now and I am celebrating this week by bringing you a special series of First/Lasts with the station's on-air personalities.

We continue today with Rosemary who is the host of the Afternoon Mix for WYEP as well as being a long time producer for the station. My thanks to her for participating in this edition of First/Last.


The first album you ever bought?
My first album that I “bought” was purchased with sweat. I weeded my Aunt’s garden in return for Paul McCartney’s “Ram.”

Your last album bought?
I get music through the station so when I buy an album it is a big deal. I bought The Low Anthem’s “Oh My God, Charlie Darwin.”

Favorite album of all time?
To quote Bryce Harper, “That’s a clown question, bro.” Totally impossible to answer with one album.

Least favorite/most disappointing album?
There are many but a recent one was Tori Amos’ latest, “Nautical Twilight.” Cindy tried to warn me about this one but I had to step on the wasp nest on my own.

First concert attended?
Sad to say but it was The Osmond Brothers on August 14th, 1970. Everyone else was going and I didn’t want to be left out. My favorite moment in the concert was provided by my 9 year old sister, Lorraine. After politely asking the girls seated in front of us to stop standing on their chairs, they were blocking our view, she grabbed both by their long Marsha Brady like hair and pulled both of them into their seats. They didn’t move or make a peep for the rest of the show.

Favorite concert ever?
So many to choose from. Probably a David Byrne, heck any David Byrne. However, Peggy Lee in New York is way up there, too.

Least favorite concert?
Chaka Khan making an early exit from the Stanley stage after a fight with hecklers got personal and ugly.

Favorite thoughts, experiences about Pittsburgh?
I was born here, the Pirates are winning, my grandparents helped build this town, and the beat goes on…
Thanks, Rosemary. Being at the station for over thirty years, I can't imagine the number of shows you have been able to see?

Posted by Hughshows at 3:00 PM