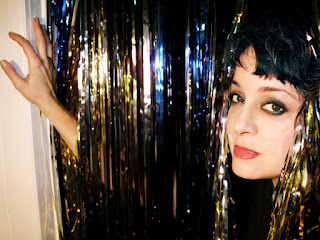 "Anti- Records is proud to announce the release of Kelly Hogan’s extraordinary new solo album I Like To Keep Myself In Pain. This Atlanta native is a beloved figure throughout the contemporary music landscape, and a multi-faceted artist whose warm southern persona and powerful voice have left their mark on countless recordings and live performances. She was recently touted “a national treasure” by colleague, friend, and former Chicago neighbor, Andrew Bird, while acclaimed singer-songwriter M. Ward simply states, “Kelly Hogan rules.”

Kelly returns to Pittsburgh tonight at Smalls sharing the bill with Neko Case. My thanks to her for taking the time to participate in this edtion of First/Last.

The first album you ever bought?
Donny Osmond, "Portrait of Donny" on 8-Track from a Grant's store in Decatur, GA, with birthday money in 1972.

Your last album bought?
Count This Penny, "Gone" EP, and their single 45 rpm of Civil War songs, too. Purchased at the merch table from the band.

Favorite album of all time?
You've GOT to be kidding me! It's impossible to decide! How about, off the top of my head, I give you three that are WAY up in the ranking?  Vic Chetnutt, "Little" + XTC, "Skylarking" + Bob Dorough, "Devil May Care".

Least favorite/most disappointing album?
Ummm, I don't know, I'm the kind of person who always gives an "A for effort" but maybe I'll say the "Fonzie" record I bought in the mid-seventies, because Fonzie was NOT on it, just some guy saying "Aayyyyy" and "Cool" and "Sit on it!" over and over on a disco track.

Least favorite concert?
The ones that get canceled due to rain...once again "A for effort”!

Any thoughts, experiences about Pittsburgh?
Let it hereby be known that I LOVE PITTSBURGH!!!! I love your folks, your bridges, your rivers, your food, your grand industrial-flavored vistas, and the ART flowing proudly through your blue-collar veins! Fred Rogers! Johnny Costa! Pittsburgh kicks ASS. Can't wait to see y'all again.

Thanks, Kelly. As the proud owner of all your albums, I am really looking forward to your set. BTW, Pittsburgh LOVES you back!
Posted by Hughshows at 7:30 AM