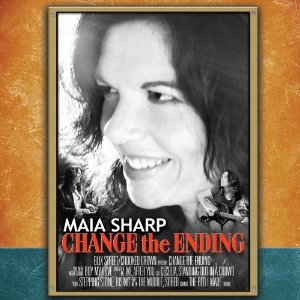 "On August 28, Blix Street/Crooked Crown Records will release Change The Ending, the new album from acclaimed singer-songwriter-producer Maia Sharp. The record features guest vocals by The Rescue’s Adrianne Gonzales, Garrison Starr, Dawn Thomas and Bonnie Raitt. Sharp will be touring with Raitt in October and can be heard on the nine-time GRAMMY® winner’s new album, Slipstream. Change The Ending follows Sharp’s 2009 album, Echo. Produced by Don Was, it contained the Top 10 Triple A radio hit “John Q. Lonely” and “Death By Perfection,” which featured Raitt and was tapped by NPR as “Song of the Day.” The new album reaffirms Sharp’s gift for capturing the subtleties and shades of gray that characterize relationships."

Maia returns to Pittsburgh tomorrow. She will playing a live studio session at WYEP at 1p.m. followed by a full set at Club Cafe with guest Garrison Starr. My thanks to her for taking the time to participate in this edition of First/Last.

The first album you ever bought?
Queen, “Greatest Hits”.

Favorite album of all time?
That’s impossible. Depends on the frame of mind. Okay, Joni Mitchell, “Court and Spark”.

Least favorite/most disappointing album?
Some fusion thing I bought in college to play along to when I was a saxophone major.

First concert attended?
Men At Work at the Greek Theater in Los Angeles.

Last concert?
k.d. lang at the Troubadour in Los Angeles.

Favorite concert ever?
Eurythmics at the Greek in Los Angeles.

Least favorite concert?
Aw, I don’t want to be mean.

Any thoughts, experiences about Pittsburgh?
I’m looking forward to getting back to one of my top 5 favorite cities to play. I’m not just kissing up, it’s true. WYEP has been very good to me and I always feel it when I come through.

Thanks, Maia. See you tomorrow.
Posted by Hughshows at 7:30 AM