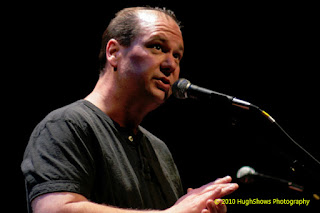 I have been 'unofficially' shooting shows for WYEP-FM for two years now and I am celebrating this week by bringing you a special series of First/Lasts with the station's on-air personalities.

We continue today with Kyle who is the Director of Content and Programming  for WYEP as well as occasional on-air fill host. My thanks to him for participating in this edition of First/Last.

The first album you ever bought?
KISS, “Destroyer”.

Favorite album of all time?
Not fair. The Replacements, “Let It Be”.

Last concert?
New Amsterdams and The Color Fleet this past Saturday.

Least favorite concert?
The Lemonheads at Stage AE this past year. Evan Dando is still his own worst enemy.

Thanks, Kyle. World Party...nice call! I also have to agree with the latest SMF. So much fun!
Posted by Hughshows at 3:00 PM